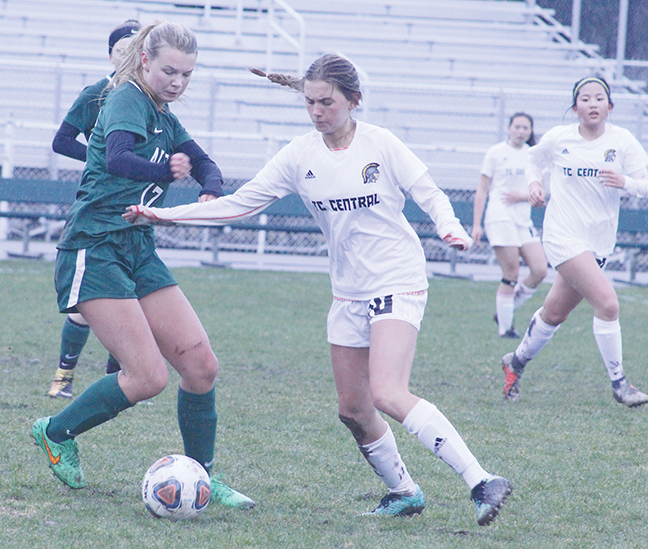 News Photo by Jonny Zawacki Alpena’s Sarah Campbell (17) battles with Traverse City Central’s Paige Kendra (10) for possession of a ball during the first half of a Big North Conference girls soccer game on Thursday at Wildcat Stadium.

The Alpena High girls soccer team opened up BNC play at home against Traverse City Central on Thursday and were on the receiving end of a 6-4 defeat.

The Wildcats had a lead on two different occasions in the first half and had opportunities to put more balls in the back of the net, but missed several key scoring chances, including three breakaways.

The defensive effort wasn’t enough though as Alpena had no answer for Central’s Anna Wuerfel, who scored four goals in the win for the Trojans.

“We had a ton of chances and we didn’t capitalize. We had breakaways that we shot over the net and others breakaway opportunities where we lost control of the ball. We allowed them (Central) to go all the way down the field on us and score,” Alpena coach Tim Storch said. “Bad goals were given up from the back and stuff like that can’t happen. We’re just making way too many mistakes and not capitalizing on chances that are sure goals and giving up too many bad goals.”

The Trojans opened the scoring just under five minutes into the game when Wuerfel scored on a long shot near the sideline that found the back of the net.

Alpena tied the game at the 24:31 mark in the first half as the Wildcats took advantage of a corner kick opportunity and Sarah Campbell deflected the ball past Central goalkeeper Ellen Selby.

Less than two minutes later Alpena took the lead when Anna Young outraced a pair of Trojan defenders and got around Selby and sent one into a wide open net to give the Wildcats a 2-1 lead.

Central scored on a similar goal as Emma Dutmers got behind the Wildcat defense and scored to quickly tie the game 2-2 with 18:20 to play in the opening half.

Alpena regained its one goal lead with 12:12 to play in the half when Mollie Girard sent a perfect shot on net. The Wildcats had been awarded a free kick after Girard was interfered with by Selby just outside the box.

It looked like Alpena was going to take a lead into the break, but the Wildcats let in another long goal as Wuerfel sent a shot on goal from about 40 yards out that ended up in the back of the Wildcat net to tie the game 3-3.

“I told the girls we should have been up by about four or five goals, if not more. The goals that they had weren’t good goals and we missed a breakaway that went over top of the net and a free kick that was set up for another goal that we missed,” Storch said. “It’s just frustrating that we’re not executing better than we are at both the attacking penalty area and the defensive penalty area.”

The Trojans began the second half with two unanswered goals to take a two-goal lead, both of which came from Wuerfel who finished with four goals and ran her career total for 48. She is now just 18 goals shy of breaking the Trojans’ all-time career goals record.

Alpena cut the deficit to one with 17:46 to play when Young netted her second goal on a perfectly executed pass out front to give the Wildcats a chance late.

The final opportunity came with under five minutes left in the game when Alpena had a breakaway opportunity, but lost control of the ball as Selby came up and made a play which allowed the Trojans to take the ball back the other way and put the game on ice when Dutmers scored the game’s final goal.

“We had the mini breakaway that would have tied it and we lost possession and they brought it down and scored. That’s a two goal turnaround and instead of it being a tie game we’re down by two,” Storch said. “It’s a tough game and I don’t know what to tell the girls because I sound like a broken record. We’re just not good enough at both penalty areas and part of that is on me and part of that is on the girls.”

Alpena falls to 2-3 overall on the year and begins BNC play 0-1.

The Wildcats will be back in action on Tuesday when they travel to Gaylord to take on a Blue Devils team that defeated Central 6-2 earlier in the week.