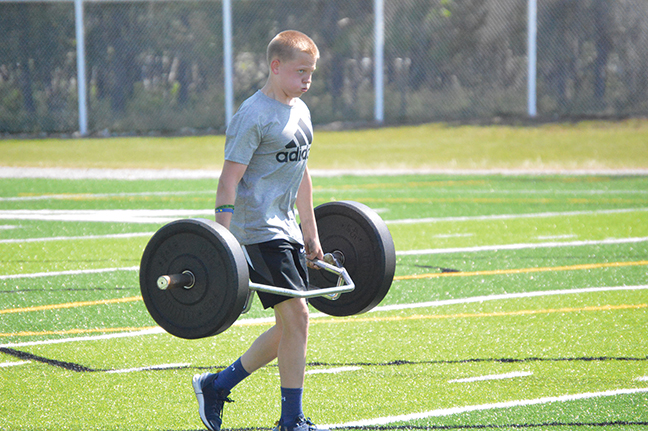 News Photo by James Andersen An Alpena High football player lifts a weight during a farmer’s walk drill during conditioning workouts Monday at Park Family Field at Wildcat Stadium. Monday marked the beginning of conditioning-only workouts for the football team as part of phase one of Alpena’s return-to-play plan for fall sports. The guidelines are aimed at helping fall sports proceed as scheduled amid concerns about COVID-19.

Charlie Williams was back in his element on Monday morning.

“It feels great. I’ve been missing this place,” Williams said. “This place is like a sanctuary for all us football players and we really feel like this place is our home and it just feels good to be back.”

Monday’s workouts looked a little different as Alpena began Phase 1 of a four phase return to play plan, but there was a welcome familiarity to them too.

Under the supervision of Alpena coach Eric Mitchell and his staff as well as some volunteers, the Wildcats were divided into pods of 10 players and rotated around eight different workout stations. Phase 1 limits football and volleyball players to conditioning workouts only, so Monday’s workouts were aimed at helping players work on athleticism and strength training. 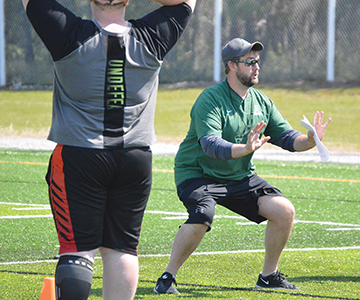 As they rotated around each station–which included two workouts in the stadium bleachers, tire flips, cone drills and footwork drills and farmer’s walks–players sanitized equipment repeatedly and the stations were well spread out over the wide expanse of the field to comply with social distancing guidelines.

Athletes will stay together in their pods during subsequent workouts and coaches are required to keep track of each athlete’s temperature and health status.

Such are summer workouts amid COVID-19 concerns throughout Michigan.

It will likely be awhile before the Wildcats return to workouts that include pads and footballs, but Monday’s gathering was a starting point for athletes to begin the process of getting back into football shape.

After being at home for three months, players like Nicholas Schaub were just as excited to see teammates and friends as they were to resume workouts. 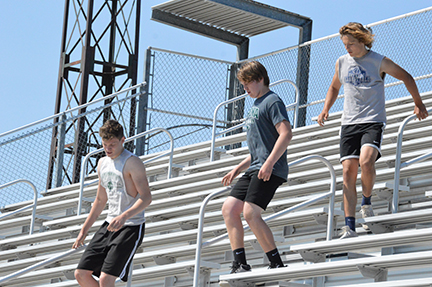 “It’s amazing. I was so excited to come back here and just grind it out. I’ve been missing it,” Schaub said. “It was awesome to see my friends again. It’s like school started, I can’t wait. I love the social aspect of it. I’m just glad to be here with everyone again.”

Mitchell said he was pleasantly surprised by Alpena’s fitness level on Monday and noted that all but a few players were able to make it through the whole workout. Like his players, Mitchell was excited to be back on the field, finally getting a chance to do something football-related.

“Obviously, it feels great. We’ve been waiting around for quite awhile; everybody has, we’re all in the same boat. There’s just something that’s right about being on a field in June, smelling fresh cut grass, having this great field right now. For us, it’s obviously our first little step, but like I said, just something that kind of gets us back to normal that feels right.

Organized athletic activities have been on hold since March when the Michigan High School Athletic Association suspended all sports activities in an effort to deter the spread of COVID-19, the disease caused by coronavirus.

As of Monday, there have been 104 positive cases of COVID-19 in Alpena County with 12 deaths and 80 recoveries. 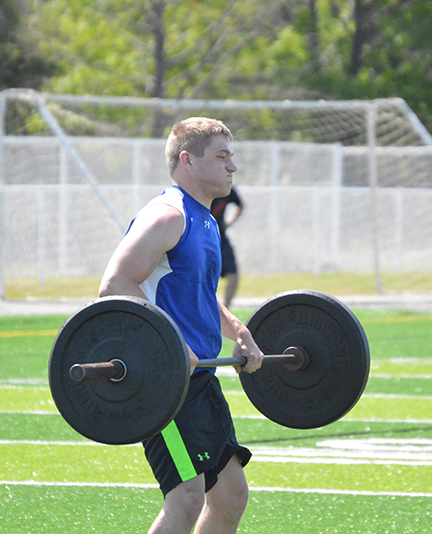 Many players, including Williams have been doing what they can to work out at home with no access to school facilities.

For Williams, that’s included morning jogs, workouts on a machine in his basement and plenty of hydration. Williams, a senior, has had plenty of motivation to work out at home. He’s aiming to play college football after his career as a Wildcat is finished and has let his coaches know about the work he’s put in.

“I’m looking to go play college after high school, so a lot of the time I’ve been messaging coaches and doing workout videos and sending it to them, just letting them know that I’m still working out and I want to go to the next level,” Williams said.

Per the MHSAA, every school in the state has to start at Phase 1 in their return to play plan, but every school also has the final say on when it will advance to the next phase. Alpena will be in Phase 1 for at least four days and Mitchell is hopeful Alpena will advance to Phase 2 next week. The next phase will still have social distancing guidelines, but players will be able to use the weight room.

Mitchell, who also coaches Alpena’s boys golf team, had plenty of time on his hands this spring after the spring season was canceled in early April. With all the extra time, Mitchell, his staff and school administrators came up with one plan after another for an eventual return to sports, knowing with so many variables in play that many of those plans were going to be scrapped. 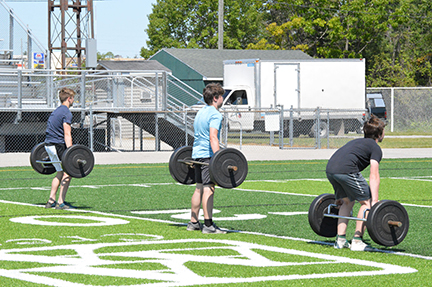 Mitchell is hopeful his players will be allowed to use sports-specific equipment, namely footballs, next month, but he also understands the importance of taking things slow and following procedure to a tee.

“For us right now, this is of the utmost importance. We know this is a very fluid situation, that it needs to be handled with diligence and in order for us to move from Phase 1 to Phase 2, we have to check this box,” Mitchell said. “With our long layoff, we looked at every single possibility of what football could look like this year. Right now, where we’re at, I think we’re in a good spot where we’re saying we’re just going to kind of carry on as if things are normal. If we’re told something different we’re told something different, but right now and starting today, things are finally feeling like they’re going back to normal.”

News Photo by James Andersen An Alpena High football player lifts a weight during a farmer’s walk drill during conditioning workouts Monday at Park Family Field at Wildcat Stadium. Monday marked the beginning of conditioning-only workouts for the football team as part of phase one of Alpena’s return-to-play plan for fall sports. The guidelines are aimed at helping fall sports proceed as scheduled amid concerns about COVID-19.