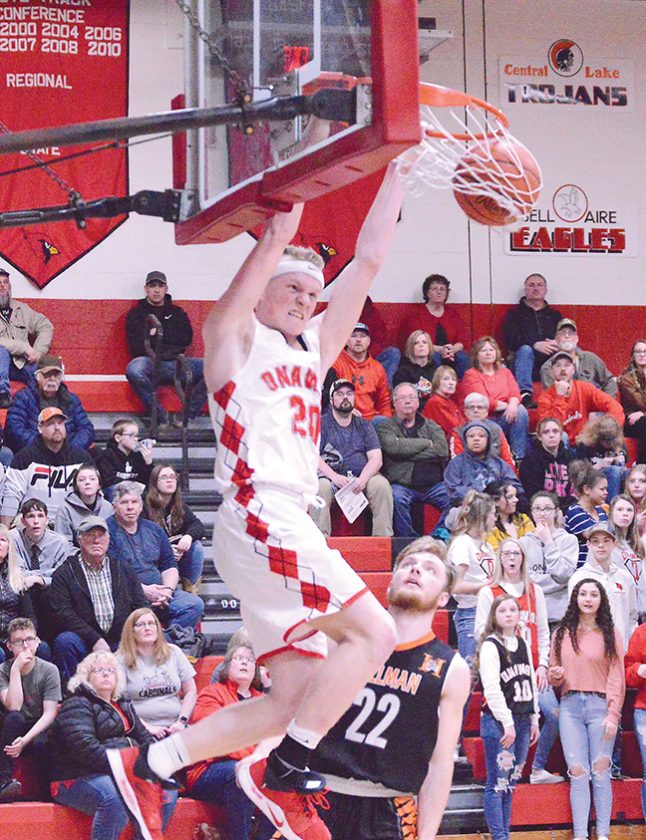 News Photo by James Andersen Onaway sophomore Jager Mix (20) dunks to the delight of the hometown crowd during the third quarter of a district boys basketball game on Wednesday at Onaway High School. Also pictured is Hillman’s Gunner Mellingen.

As players thought about it, Szymoniak’s answer was short and simple: We’re 2-0.

For the Cardinals that means they’re undefeated in the postseason, getting better with each game and one step closer to district gold.

Much like they did on Monday in a win over Wolverine, the Cardinals kicked things into another gear in the second quarter Wednesday to pull away from the Tigers (5-15).

Onaway led 17-13 after one quarter and opened up a 30-15 lead midway through the second quarter on the back of steady defensive pressure and three-point shooting. The Cardinals canned three triples in a 40-second span and made all sorts of hustle plays on both ends of the floor to frustrate Hillman.

With Pearson directing traffic on the outside and Mix patrolling the paint, there were stretches where the Cardinals simply couldn’t be stopped.

“When we moved the ball extremely well, we did exactly what we wanted to do. We had a game plan coming in for the last two nights and I can’t be prouder of this team,” Szymoniak said. “They’re executing. They’re doing everything right now.”

Isaac Morrison scored 11 points to lead Hillman and Gunner Mellingen added eight. The Tigers played Onaway just about even in the second half–Onaway scored 29 points to Hillman’s 25–but early offensive struggles cost the Tigers a chance to make any kind of run at Onaway’s lead.

“Tonight, some of the normal things that have kind of plagued as year kind of came out. We played it pretty tight early, but we started to get into a little bit of foul trouble,” Hillman coach Eric Muszynski said. “I thought early on we had some easy baskets (that missed because of) their pressure. If we make those baskets, it’s a little bit of a different start.”

The Cardinals, who will have a chance to win just their third district title in program history on Friday, delighted their fans with another solid performance that includes more than a handful of exciting plays, which included:

∫ After an airball on a three-point attempt, Daniel Price scored his only points of the game on a reverse layup to beat the first quarter buzzer.

∫ Mix threw down several dunks, including a thunderous one with 5:38 left in the third quarter, extending Onaway’s lead to 52-30.

∫ Early in the fourth quarter, Austin Nash passed to a streaking Pearson, who scored on a catch-and-shoot to give Onaway a 64-38 lead.

So far it’s been exactly the kind of postseason Onaway’s been hoping for after more than a few ups-and-downs in the regular season.

“We’ve talked about it all year through the ups-and-downs. Honestly, I don’t care what our record is going into this. I told them when we were in the locker room, I asked them what our record was. They were trying to figure it out and I said, ‘We’re 2-0,'” Szymoniak said. “Game 21 is where it starts. The regular season doesn’t mean anything. We’re peaking at the right time, we’re healthy right now and we’re playing extremely good basketball at the right time.”

Muszynski praised his team’s efforts this season and the leadership of his three seniors, Mellingen, Morrison and Nash Steinke.

“I thought overall in the season we continued to get better. You could see over the last three or four weeks we were pretty close in the bulk of our games. Some teams that we had struggled with early in the season where we lost by 30 or 40 points, (the second time around) we were cutting it to 10, 12 points,” Muszynski said. “My hats off to the guys. This is a pretty tough basketball program to play in, a lot of pressure. They responded well.” 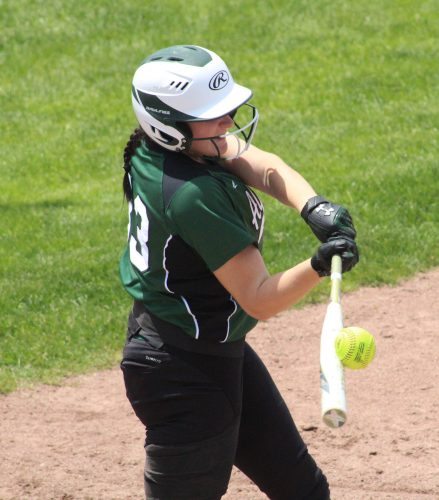