The best for last 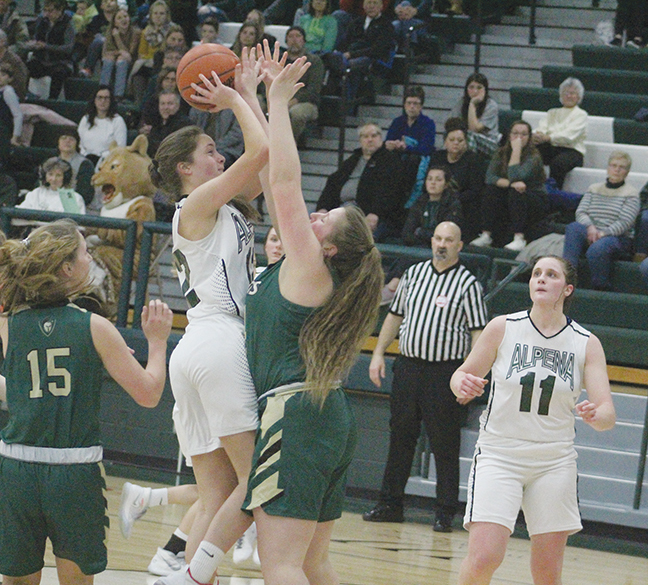 It’s always important to remember the famous phrase, “it’s not how you start, it’s how you finish.”

Oddly enough, the Alpena High girls basketball team got off to a slow start to Senior Night.

The Wildcats were held to just 16 first half points and trailed 30-27 after three quarters, but the way Alpena (10-6, 5-3 BNC) finished was as impressive as the Wildcats have looked all year. They took their first lead of the night early in the fourth quarter and exploded for 30 points to put together one of their best quarters of basketball since head coach Erin Andrews took over.

The fourth quarter rally fueled Alpena to what ended up being a comfortable 57-46 win over Big North Conference rival Traverse City West (5-12, 3-5 BNC) on Thursday at Alpena High School.

“Thirty points in a quarter is truly special. The girls got looks, took the shots they needed to, made good passes and took care of the ball. If we can play the way we did in the fourth in every quarter, we’d be in good shape,” Andrews said. “That is the kind of basketball I know we can play. We were all over the floor, making things happen, looking inside, making inside shots on the first or second try, rebounding, really all of those things happened in the fourth quarter.”

Alpena was held to just one made basket in the opening quarter and it was the Titans that came out as the aggressor, despite the Wildcats having a little extra motivation playing on Senior Night.

The slow start continued on into the second quarter as the Wildcats were unable to get many good looks at the basket. The result was just five field goals, 16 points and a four point deficit at the break.

“We had a real good halftime pep talk. The message was simple, play better,” Andrews said. “When our girls play like a team like we did in that fourth quarter tonight, that’s the best thing you can do, it’s all you can ask for as a coach and I knew they were capable of playing this way.”

It took a bit for the Wildcats to respond to the simple halftime message as Alpena found itself trailing 30-27 after three quarters, but Allie DeRocher started to heat up. The junior stepped up on a night that belonged to the seniors as DeRocher scored all 15 of her points in the second half, including nine in the third quarter.

Senior Jade Schultz scored eight of her 15 points in the fourth quarter and sophomore Allie Urlaub scored all 10 of her points in the final quarter as the trio lit a spark for the Wildcats down the stretch and were crucial in helping Alpena complete a comeback on Senior Night.

“We adjusted our offense and ran our zone offense against their (West) man and that opened up Jade (Schultz) and once she gets going it opens up everyone else and both Allie DeRocher and Allie Urlaub both came up clutch in the second half,” Andrews said. “It’s one of the better quarters I’ve seen in a long time and it’s good to end like that one Senior Night for our five seniors. It was a special night and this is the group that I’ve been with the longest, they were all on JV when I took over and it’s been special watching them grow and seeing the girls come such a long way.”

The Wildcats took their first lead of the came within the first minute of the fourth quarter. Urlaub opened with a three and DeRocher got a shot to fall to give Alpena a 32-30 lead with 7:16 left to play.

The next two minutes featured four lead changes before the Wildcats went on a 14-2 run to take a 48-37 lead with 2:20 left in the contest as Alpena had no problem finding ways to score in the final quarter and closed the game out strong.