Lumberjacks can’t rise to the occasion vs. Henry Ford 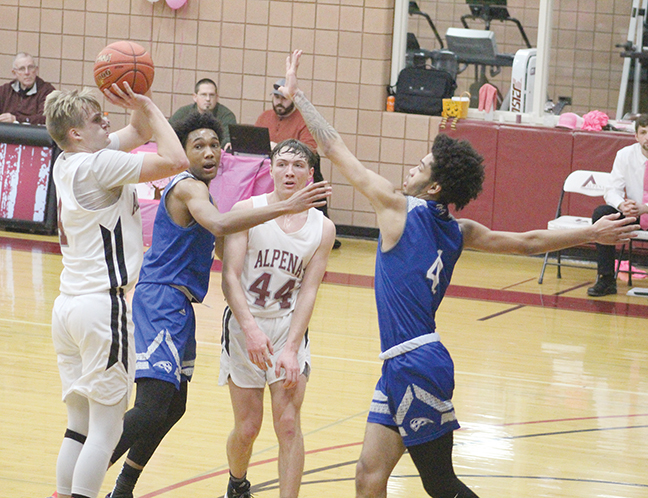 News Photo by Jonny Zawacki Alpena Community College guard Garett Miller shoots a ball over the outstretched arm of Henry Ford defender Amari Frye (4) during the second half of a men’s basketball game on Wednesday at Park Arena.

With all of the pre-game festivities going on during Alpena Community College’s Hoops for Hope night and the men’s basketball team entering Wednesday’s contest against Henry Ford winners of their last two games, the Lumberjacks were plenty motivated.

It showed early on as they came out and played with intensity and confidence, but once again experienced one of their usual lulls midway through the second half and eventually time ran out and ACC fell 80-72.

“I was very proud of my guys. We had good looks, but the ball just wouldn’t fall. We just missed a lot close up shots,” ACC coach Mark Jacobs said. “My guys showed heart, came back and scared them (Henry Ford) in the second half. We can play with anyone in this league and my guys know that. We just have to play for 40 minutes and continue to move the ball around. They’re a good team and my guys showed a lot of heart tonight.”

Despite the loss, Wednesday’s result was a drastic turnaround from the last time these two teams met when the Lumberjacks were on the receiving end of a 51-point drubbing at Henry Ford.

This time around was much different as the Lumberjacks opened the game with high energy and seemed to feed off of a special home crowd on what was a special night.

Alpena opened the contest scoring 11 of the first 13 points to take an early advantage as the Lumberjacks had their rhythm going early from behind the long line, knocking five threes in the first six minutes of the game and five of their first six baskets were triples as Alpena led much of the half.

“I think any time you have something emotional going on before the game gets the guys fired up, but I also think the two wins has been a big cure for a lot of things as well,” Jacobs said. “We moved the ball around and we were hitting the shots early. We didn’t do so bad the second half, but we just couldn’t hit the shots.”

The Hawks took their first lead of the night with just over three minutes left in the first half and took a lead into the break after Yousuf Farhat nailed a pair of threes in the final minute to give Henry Ford a 40-34 halftime lead.

Offensive lulls have been Alpena’s Achilles heel and another lull was once again the turning point and difference in the game as the Lumberjacks went cold for a stretch midway through the second half and Henry Ford took advantage by breaking the game open and taking a 66-44 lead at the 10 minute mark in the second half.

The Lumberjacks did all they could the rest of the way to try and chip away at the lead, including getting a spark from Cleveland Baker who knocked down three treys in the final minute to cut the lead to single digits, but unfortunately for Alpena, it was too little too late and time ran out on the Lumberjacks.

ACC was led by Isaac Hogsett who scored a team high 16 points. Garett Miller finished with 15 points and Logan Guenther added 14 points in the losing effort.

Leon Ayers paced Henry Ford and all scorers with 17 points on the night. Farhat collected 14 points, Cameron McEvans added 11 points and Amari Frye and Bert Brown each chipped in with 10 points.

The Lumberjacks will travel to Mott Community College on Saturday.