Tigers take the next step 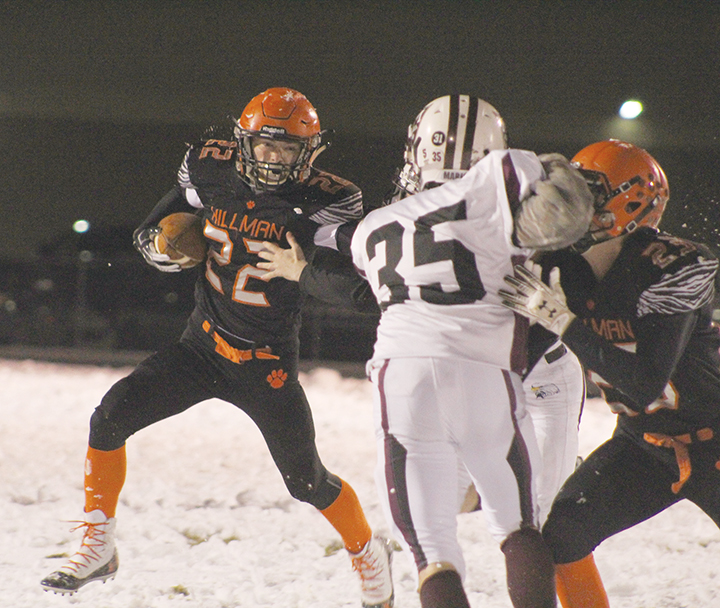 News Photo by Jonny Zawacki Hillman running back Gunner Mellingen (22) tries to elude Marion defender Riley Moggo (35) during the first quarter of a first round, Division 2, 8-Man playoff game on Friday in Hillman. The Tigers defeated Marion 28-6 and advance to next week’s regional championship game where they will play host to Cedarville.

HILLMAN — Heading into Friday’s opening round playoff matchup against Marion, Hillman head coach Cody Allen told his team it needed to step it up and take its play to another level.

The Tigers (9-1) responded and did exactly that as they won their fourth playoff game in school history and first in its two years of playing eight-player football, defeating Marion 28-6 and securing their first playoff win under Allen.

“A home playoff win is once of the best feelings for these guys. It’s something that not a lot of kids get to feel and it was one thing we talked about this week was breaking that tradition where we get to the playoffs and something bad happens and we end up losing the game,” Allen said. “I’m just very proud of our effort tonight.”

On the first night in November, where Hillman’s football field was covered in snow and playing conditions were supposed to be challenging, the Tigers did not hesitate or change the way they have played all year. Hillman kept the playbook open and relied on senior quarterback Nash Steinke and he delivered, throwing three touchdowns in the win.

“It’s a great feeling. Credit to the men for stepping up tonight, these guys really brought it in tough conditions. Credit to Nash Steinke for throwing some really beautiful balls in this weather,” Allen said. “He’s been that way for us all year. Through all of the injuries we’ve had, he’s been the constant and the kids get behind him. He’s an excellent leader and he really just played his heart out tonight.”

Allen showed confidence in his team early and it paid off as Hillman opened the scoring on its first possession and fourth play from scrimmage. The Tigers faced a fourth down and five, but Allen kept the offense on the field and put the ball in the hands of his quarterback. Steinke found a wide open Dawson Ableidinger, who got a block down field and raced down the sidelines for a 55-yard touchdown and Hillman took an early 8-0 lead after a successful two point try.

The Tigers forced Marion to punt on its opening possession and Hillman took over at its own 30 yard line. Once again the Tigers faced a fourth down in its own territory. Needing three yards, Allen again kept his offense on the field and this time called on his dynamic playmaker, Gunner Mellingen.

Melligen didn’t disappoint, ripping off a 54 yard run up the middle and reached pay dirt to put Hillman up 14-0.

“Our defense has played incredible the last four weeks so we just have the confidence that we can get a first down at any time no matter where we are on the field. We’ve gone for some we probably shouldn’t have this year, but that’s the confidence we have in these kids,” Allen said.

Hillman took its two touchdown lead into halftime and continued to control the contest in the second half. The Tigers recovered a fumble on Marion’s first possession of the second half and turned it into points when Steinke threw his second touchdown pass of the night. On fourth down, Steinke threw a perfect pass to Sean Henigan in the back of the end zone for a 25-yard score and Hillman extended its lead to 20-0.

As strong as Steinke’s quarterback play was, he also made an impact on defense, stepping in front of a throw from Eagles quarterback Alex Sutten and returned it to the Marion 10 yard line.

Steinke finished the drive with his third touchdown pass of the night and second to Henigan as the two connected for a 10-yard pitch and catch to put the Tigers on top 28-0 late in the third quarter.

Steinke finished 5-of-10 passing for 108 yards and the three scores in frigid temperatures and while playing on a snow covered field.

Mellingen paced the Tigers backfield with 119 yards rushing on 11 carries and one touchdown.

Marion’s lone score of the night came early in the fourth quarter on a broken play as Sutten scrambled for a 17-yard touchdown.

Hillman advances to next week’s regional championship matchup against Cedarville (6-4) in a rematch of last year’s first round playoff matchup where the Trojans ended Hillman’s season after a 44-6 rout.

The Tigers have revenge on their mind and know what they will be up again as they host their second playoff game in as many weeks.

“It’s going to be that U.P. power football and we’re going to have to respond to it the best way we can. We know they’re going to come after us and hit us in the face no matter what the weather is and I think we’ll respond to it this year. We’re ready for it, we know what it takes to win a playoff game and we’re going to try to bring the same energy next week,” Allen said. “We’re playing for a regional championship, again something our football program has never done. We’re going to work towards that as hard as we can this week and that’s our goal.”