The postseason is here 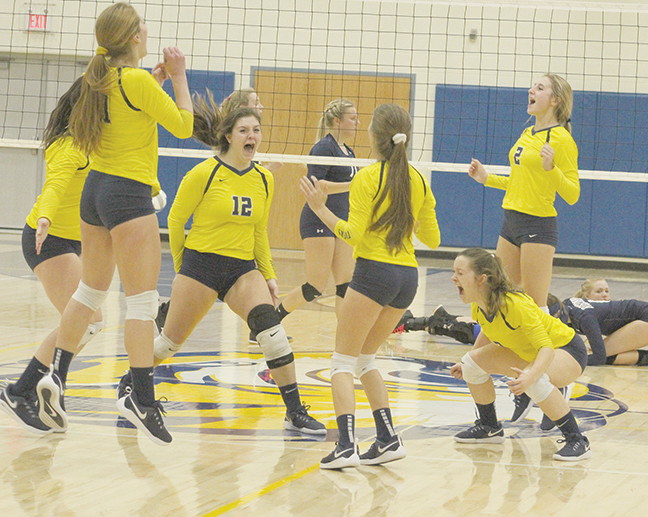 News Photo by Jonny Zawacki Members of the Alcona volleyball team celebrate after scoring the final point in the fifth set of a district quarterfinal volleyball match against Roscommon on Monday at Alcona High School.

LINCOLN — On a night that started out so easy for the Alcona High volleyball team, it ended as anything but easy for the Tigers.

Alcona opened district play against Roscommon and despite winning the first two sets, the Tigers were forced to gather themselves, find a way to hang on and not let their season slip away as they ultimately defeated the Bucks 25-9, 25-16, 28-30, 15-25 and 15-13 on Monday at Alcona High School.

Alcona looked dominant early on, winning the first two sets with ease to come within a win of ending the match. But the Bucks battled their way back and won a dramatic, back-and-forth third set to gain momentum. Roscommon was able to build on that win and controlled the fourth set to set up a pivotal fifth and final set.

Despite trailing 13-11 late in the fifth set, Alcona stormed back and scored the final four points to send its home crowd into a frenzy and keep its season alive.

“It was very exciting for the girls. We’ve been talking all season about finishing and making big plays when we needed to and they came up huge during that final stretch in that fifth set,” Alcona coach Kristi Miller said. “They needed to play more consistent down the stretch and we knew Roscommon was going to come back strong. We knew we had to keep pushing forward and we couldn’t look back at mistakes that we made, we needed to recover quickly and execute.”

The Tigers got off to a scorching start, scoring the first seven points of the first set and scored 10 consecutive points midway through to take a commanding lead and coasted to an early win.

Despite falling behind in the second set, Alcona stormed back in a big way and once again made things look effortless as the Tigers communicated well and took advantage of Roscommon miscues to take a commanding lead in the match.

The third set is when the night changed and momentum shifted in a big way as both teams battled.

Alcona came within one point of ending the match after taking a 24-20 lead, but the Bucks scored four straight to tie the game and the two sides exchanged points and leads until Roscommon finally found a way to put away the Tigers and keep the match going with a thrilling 30-28 victory.

All of the momentum was in the Bucks’ favor and it showed in the fourth set as Alcona went from doing everything right to committing mistakes and playing sloppy. Eventually it was Alcona with its back against the wall after Roscommon tied the match up after a convincing fourth set victory.

“I just told the girls that we needed to settle down and we needed to work defensively and work together to make sure we weren’t being predictable,” Miller said.

Roscommon scored the first four points in the final set and it appeared as if the Tigers were going to have their season end in frustrating fashion, but Alcona responded after trailing 9-4, with five unanswered points to tie the game.

Alcona took its first lead of the set at 11-10, but the Bucks scored three straight to force an Alcona timeout.

The Tigers responded from the timeout in the perfect way as they scored the final four points to hang on and continue their season in a thrilling postseason opener on their home court in a district quarterfinal match.

The Tigers were led by Lily Bilbey who finished with 15 kills and Brooke Pagels added 10 kills, nine digs, three blocks and three aces.

“The girls definitely believe in each other and they know they can do anything when they all work together,” Miller said.

The Tigers advance to Wednesday’s district semifinal game, once again on their home court when they play Houghton Lake at 7:30 p.m.