Opportunity of a lifetime

Hillman takes on Pickford with state championship berth at stake 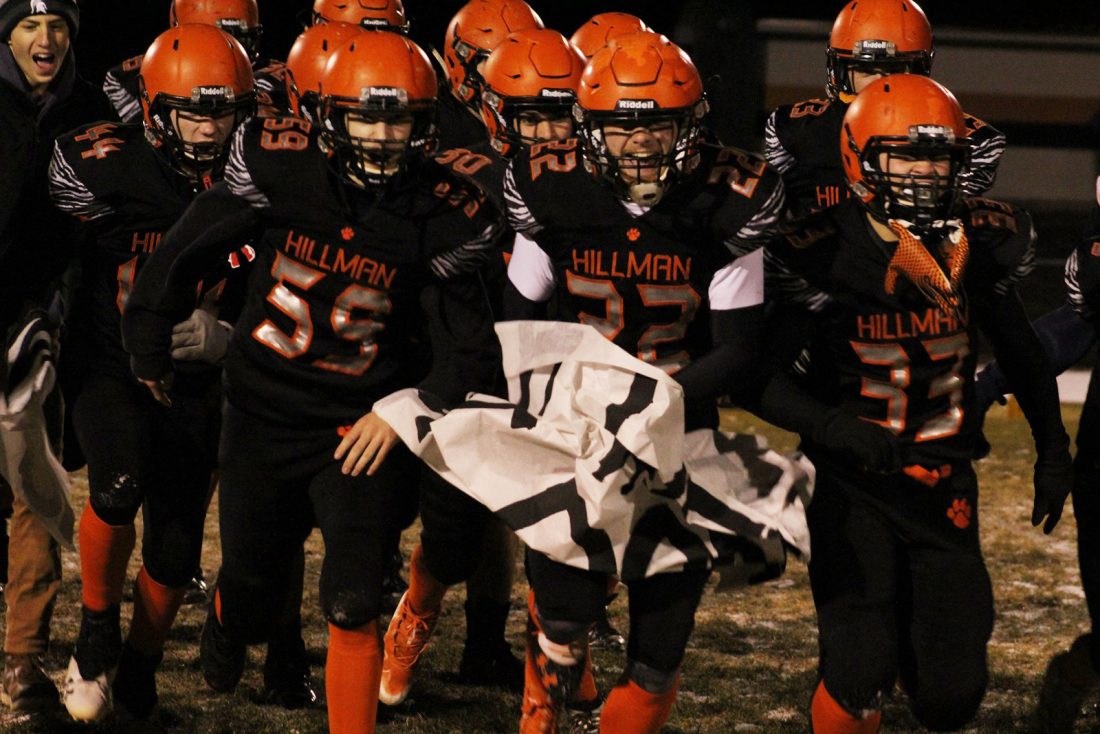 News File Photo The Hillman High football team races onto the field before a regional championship game against Cedarville last Friday. The Tigers defeated the Trojans to win its first regional title in program history. Hillman travels to Pickford tonight to play the Panthers in a Division 2 eight-player state semifinal game at 7 p.m.

Tonight his team of 22 players will have an “opportunity of a lifetime.”

At 7 p.m. when the ball is set on the tee, the lights are shining down onto what is likely to be a frozen and snow covered field at Pickford High School, the Tigers will be faced with an opportunity of a lifetime as they battle for a chance to advance to a state championship game.

Hillman and Pickford meet tonight in a Division 2 eight-player state semifinal game, with the winner advancing to next weeks state title game which will be played in the Superior Dome on the campus of Northern Michigan University in Marquette.

“We’re still excited. We want to keep the train rolling. We’re making history already and we want to continue making more history Friday night,” Allen said. “The chance to play for a birth in a state championship game is an opportunity of a lifetime for these young men. It’s not something Hillman has been able to do as a football program. We continued to work hard all week and try to make the best of this special opportunity that we’ve earned.”

The Tigers had the luxury of hosting its first two playoff games and looked strong defeating Marion 28-6 in the regional final contest before knocking off Cedarville 48-44 in a thriller.

Now Hillman has to make leave the comforts of home and make the trip above the bridge where they will take on No. 2 ranked Pickford.

Despite being away from home, the weather conditions will likely make the Tigers feel at home as they’ve had to battle a snow covered field and frigid temperatures the past two weeks and tonight will be no different as Pickford has had plenty of snowfall throughout the week and the game time temperature is expected to be 13 degrees.

“I don’t believe the weather is going to be anyone’s advantage. At the end of the day both teams have to play under the same conditions,” Allen said. “Pickford is probably built for it a little better with their size, but we have good speed and as long as the field isn’t slippery, I think we’ll match up just fine.”

Tonight’s matchup will feature two dynamic players on both sidelines. Hillman relied heavily on the play of senior Gunner Mellingen in last weeks win and Mellingen carried the load, rushing for 299 yards on 26 carries, scoring four touchdowns on the ground and running a 72 yard kickoff return back for a touchdown.

Pickford has its own game-breaking star in senior quarterback Jimmy Storey.

Much like the Tigers relied on Mellingen last week, the Panthers did the same and relied on Storey to help Pickford hand No. 1 ranked Powers North Central its first and only loss of the season to eliminate the Jets and advance to tonight’s semifinal game.

Storey toted the rock 51 times, racked up 280 yards on the ground and scored the game-winning 10-yard touchdown with 51 seconds left to lift Pickford to a 20-14 victory.

Storey scored all three of Pickford’s touchdowns a week ago and has been the Panthers biggest weapon. Storey has piled up nearly 3,000 all-purpose yards this season and has been responsible for 40 touchdowns.

Stopping Storey will be at the top of Hillman’s list, but the Tigers will also have to keep a close eye on senior Stephen LaMothe.

The Panthers use LaMothe in the backfield and line him up at a receiver position. Lamothe has caught 37 passes for 811 yards and scored 11 touchdowns, while adding 730 yards rushing on 73 attempts and 10 more touchdowns on the ground. Pickford’s 6-7 Nate Edington will also be a threat if Pickford chooses to go to the air as the Tigers struggled to slow down Cedarville’s passing attack as Trojans quarterback Trey Paquin threw for 295 yards and five touchdowns in last weeks loss to Hillman.

Senior Isaac Brown and juniors Micah Bailey and Dominic Bonnee have combined for over 1,000 yards rushing and 22 touchdowns and provide plenty of depth for the Panthers, but with a state championship appearance on the line, it’s likely Pickford will put the ball in Storey’s hand early and often.

“I know Pickford is big and strong. Their quarterback Jimmy Storey is an exceptional athlete and he ran the ball a ton against Powers (North Central) and stopping him is definitely the key to limiting them,” Allen said. “They like to power run. Traditional UP football, they try to hurt you right in the mouth and run it right down so we’re going to have to play in this cold weather and respond to it.”

For Hillman, nothing about their season has come easy as they’ve suffered a plethora of injuries throughout the year and maybe none worse than the loss they endured last week when senior quarterback Nash Steinke left the game due to injury and did not return. Steinke has been ruled out of tonight’s game and in his place will be sophomore Sean Henigan.

Hillman had success in the playoff opener and the first half of last weeks game due to Steinke’s ability to throw the ball. The gameplan changed a bit for the Tigers as they relied heavily on the run and kept feeding Mellingen who couldn’t be stopped.

“We’ve had to make a few adjustments, but we trust Sean to throw the ball. He throws real well and has experience playing the quarterback position and he has the ability to do what we need,” Allen said.

Henigan has only attempted four passes on the year, completing three of them for 43 yards and a touchdown. He also has the ability to make plays with his feet as he filled in when Mellingen and Caleb Sanders were injured at times throughout the season. Henigan has run for 455 yards and a pair of scores, but will need to take his play up another level to improve Hillman’s chances of playing one more week.

This is the Tigers first ever Final Four appearance as a football program and Hillman’s first since 2015.

If Hillman is able to knock off the Panthers advance to a state championship game, it will be the schools first appearance in a state final game since 1997.

More history is within reach, but at this point, these history-making Hillman Tigers are ready for another challenge.