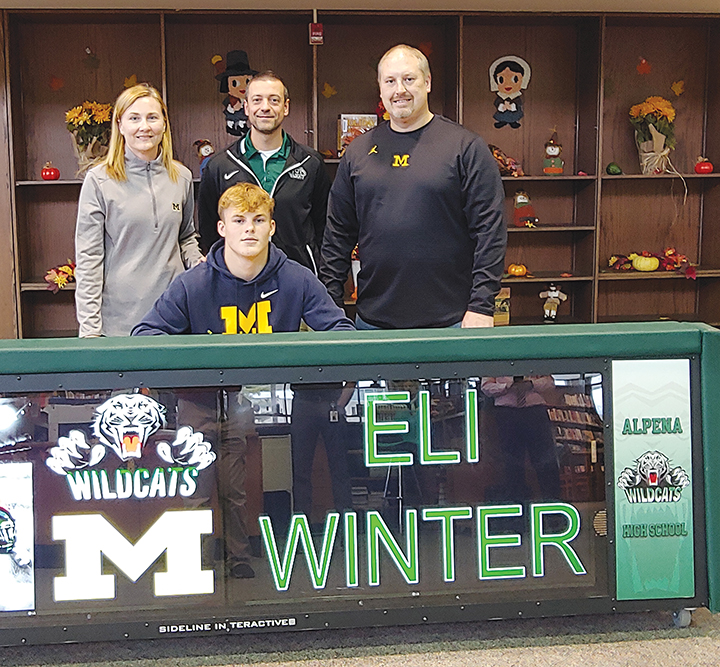 News Photo by James Andersen Alpena High senior Eli Winter, seated, made it official on Monday, announcing his comittment to join the track and field team at the University of Michigan. Winter, who won a state title in the discus this spring, signed his letter of intent with the Wolverines last week and will follow in the footsteps of some family members by heading to Ann Arbor. Pictured behind Winter are his mother and father Brian and Sara Winter and Alpena boys track coach Collin Riffert (middle).

For Eli Winter, the choice has always been an easy one.

On Monday, the Alpena high senior got to make it official.

Winter formally announced his commitment to the University of Michigan track and field team after officially signing his letter of intent with the Wolverines last Wednesday during the early signing day for high school athletes.

“It’s a good feeling because I know next year I’ll be in Ann Arbor and I’m just ready to continue the next process for sports,” Winter said.

Winter attended a track and field camp at Michigan for two years, getting familiar with the coaching staff. Spending that time in Ann Arbor furthered solidified Winter’s choice and checked off another box. By choosing Michigan, Winter will follow in the steps of his father and grandfather, fulfill his desire to attend an in-state school and have the chance to earn a solid education.

Winter turned heads after a standout junior season, which ended with him winning the Division 1 state title in the discus. His PR of 180 feet, 1 inch at the state finals marked the fourth time he set a new school record in the event during his junior year and he also earned all-state honors in the shot put, with a throw of 51 feet, 6 3/4 inches.

He credited Alpena’s assistant throw coach Trevor Roznowski for pushing him, even in the toughest of times last season to have the kind of year he wanted to have. By the end of last season, Winter shattered Alpena’s longstanding discus record by almost 20 feet and also won a Big North Conference title in the event.

“That really solidified me getting to the next level for college,” Winter said if his record-setting year. “I really needed a big junior season, not only to go to college, but to go to a high level program like Michigan and so that season really helped me get there.”

Winter is the latest Alpena track and field athlete to sign with a Division 1 program, joining alumni including Mitchell Day, Josh Smith, Aden Smith, Maddy Boyd and Faith Weide, who have all signed their own D-1 letters of intent in recent years.

“That’s the best of the best. It’s just awesome to see one of your athletes move on to that level. Just knowing who he is and how hard he works, he’s very deserving of the opportunity too. He’s a great athlete, but he works hard and he’s one of the nicest people you’ll ever know,” Alpena boys track coach Collin Riffert said. “It helps having all those athletes go (Division 1) the last few years, so they (college coaches) know they’re getting some quality athletes from us.”

Winter, who plans to study economics with a business minor, announced his verbal commitment to Michigan in mid-October, about a week after making an official visit. During the visit, he got to take in a football game, talk with Michigan’s track coach and tour the school’s facilities.

Though he figures to have a solid senior season, Winter knows he’s got to get stronger before heading to Michigan to compete in the discus, hammer throw and weight throw.

“In terms of throwing I’m definitely undersized, so I’m going to have to bulk up for college,” Winter said. “It’s a whole (other) game really up there. I’ve just got to step it up and be prepared.”