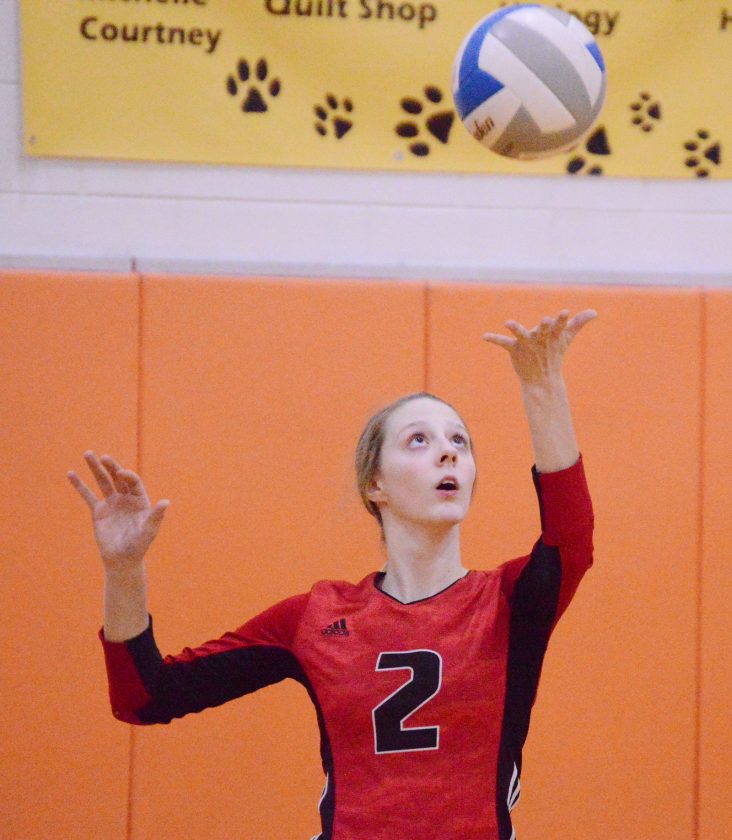 News File Photo Onaway’s Mallorie Neelis serves a ball during a district volleyball match in Hillman. The Cardinals will take on Pellston tonight in a regional semifinal contest in Cheboygan at 5:30 p.m.

Steve Watson doesn’t take anything for granted when it comes to the postseason.

“(In the postseason) I assume everyone (the opponent) plays flawlessly,” Watson said. “I’m expecting them to do everything right.”

He’s expecting nothing less from his Onaway volleyball team when it takes the court against Pellston on Tuesday in a Division 4 regional semifinal.

Game time is scheduled for 5:30 p.m. at Cheboygan High School. Pickford will play Rudyard in the region’s other semifinal at 7 p.m. and the two winners will play Thursday at 6 p.m.

Pellston and Onaway are no strangers to one another. Apart from being Ski Valley Conference rivals, the two teams have met in the postseason several times in recent years. Onaway topped Pellston in regional semifinal matchups in 2012 and 2014 and the Hornets got the upper hand in a 2013 regional semifinal.

Familiarity allows Watson and the Cardinals to better prepare for the game ahead of them, but Watson said the Hornets have the same advantage as well.

“It goes both ways. Whatever we know about them, they know about us,” Watson said. “We’ll both look to exploit (each other’s) weaknesses, but both teams have the same advantage.”

Onaway swept Pellston during a conference matchup in October, but the Hornets won’t be any less formidable this time around. Pellston won its 13th straight district championship last week and has plenty of talent to challenge the Cardinals.

Sophomore hitters Grace Morse and Jordyn Daily are two of Pellston’s better hitters and Watson said Onaway will also keep an eye on senior setter Kaitlyn Bricker, who has been described as a coach on the court for coach Ashley Vieau’s Pellston squad.

Bricker had 25 assists and 15 digs for Pellston in the Hornets’ district title win over Burt Lake Northern Michigan Christian, Morse had 10 kills and five digs and Daily had seven kills and a pair of blocks. Hitter Hali Williams (seven kills, three kills) and Asha Armock (six kills) were big contributors offensively as well.

“We’ll try to get digs on them early, dry to defend them and prevent attacks,” Watson said. “It comes down to us making plays when we’re capable of doing it and making each point count.”

Watson is counting on a similarly balanced effort from his team tonight. That means big offensive nights from the likes of Breya Domke, Malaurie McLean and Cloe Ehrke with Mallorie Neelis setting them up with good chances to attack.

Watson said he’s already visualized exactly how the Cardinals can win Tuesday’s matchup and now it comes down to his players converting potential into reality by making good choices on the court and playing smart.

“We’ll see in the first few minutes if they’re capable of rising to the challenge,” Watson said. “They know what they have to do, but now they have to go do it.”