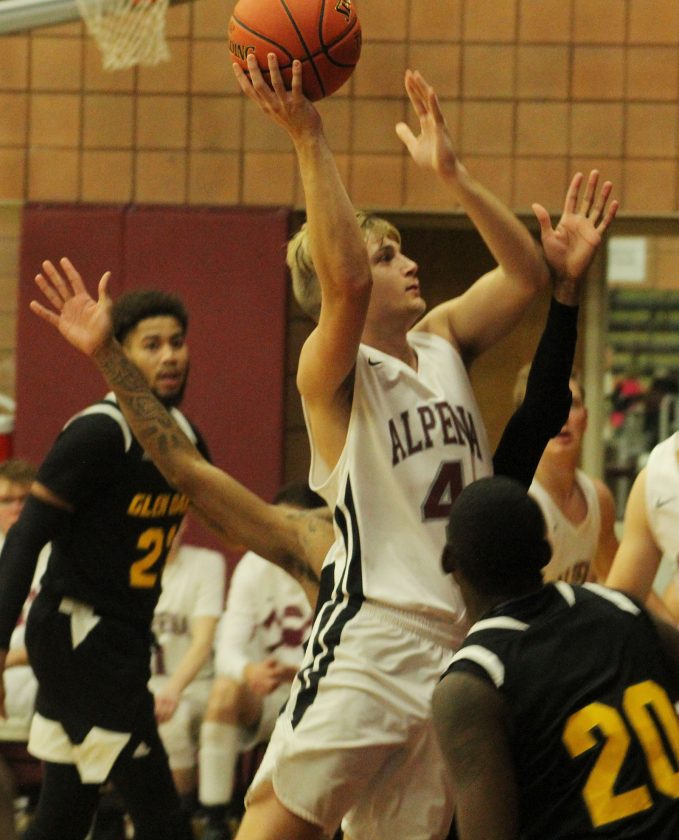 News Photo by Jonny Zawacki Alpena Community College guard Garrett Miller goes up over a pair of Glen Oaks Community College defenders for a shot during the second half of a men’s basketball game on Saturday at Park Arena.

It’s been a frustrating first few games of the season for the Alpena Community College men’s basketball team.

The frustration continued on Saturday in a 86-64 loss to Glen Oaks Community College in ACC’s home opener are Park Arena.

The Lumberjacks got off to their best start of the season as they’ve had trouble opening games and often times falling behind early.

That wasn’t the case on Saturday as Alpena went toe-to-toe with the Vikings in the early stages of the first half, but as time went on, the Lumberjacks became stagnant offensively and were unable to get shots to fall and trailed 47-36 after one half of play.

“I think we kind of get complacent in our offense and we just get in lulls and we can’t do that. Every team we run into shoots the ball well. Coming into today, Glen Oaks wasn’t very good from behind the three point line, until today,” Jacobs said. “It wasn’t a pretty game, but we have to move on and get ready for our next game.”

Alpena had no answer for the trio of Whitney Harris, JoMel Boyd and Le Angelo Saravia as the three combined to score 68 points and outscore the Lumberjacks by themselves.

Harris and Boyd led the way with 25 points and Saravia added 18 points.

The Vikings came out and controlled the second half and built on their double digit lead and cruised to a combing win.

The Lumberjacks were held to just three successful three point shots, the lowest from an ACC team in Jacobs’ three seasons as coach.

Chris DeRocher paced Alpena with a team high 16 points, while Logan Guenther, Isaac Hogsett and Garrett Miller each finished with 11 points in the losing effort.

ACC will look to rebound quickly as they’re back in action tonight as they hit the road to take on Bay College.