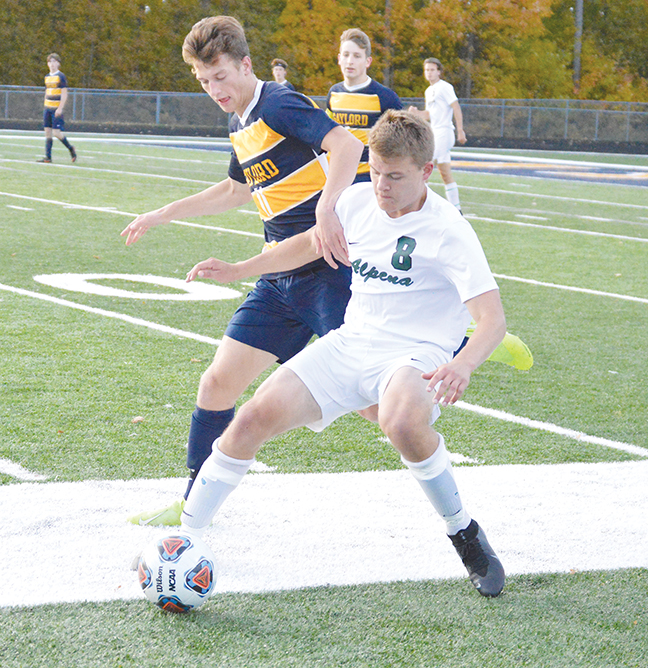 News Photo by James Andersen Alpena defender Jack Hamp (8) fights with Gaylord’s Regan Distel for control of the ball during the second half of a district soccer game on Saturday in Gaylord. The Blue Devils defeated Alpena 2-1, topping the Wildcats for the third time this season on the way to their first ever district championship.

Despite a late offensive rally, the Wildcats came up short in their quest for a Division 2 district title and lost to Gaylord 2-1 at Gaylord Community Field.

Jack Holscher and Ian Busch both scored for the Blue Devils (19-3-2), who secured the program’s first ever district title along with their third victory over Alpena this season.

Under occasional sunshine and windy conditions, the Wildcats had trouble breaking through Gaylord’s defense and spent much of the game on the defensive. Alpena (17-5-2) managed just two shots on goal in the first half and only managed one goal on a few chances in the second half.

“We didn’t play our best game, that’s for sure. There were some breaks that we probably could have had that we didn’t get; I’ll leave it at that,” Alpena coach Tim Storch said. “It’s unfortunate that it came to that in this particular game, but Gaylord’s a good team and they beat us three times, which is tough to do when you’ve got two evenly matched teams, so credit to them.”

Craig Tagliareni scored for Alpena with 4:57 to play, converting a chance off a corner kick, but it proved too little too late for the Wildcats, who fell short in their first district title appearance since 1997. It wasn’t until the last 10 minutes of the contest that the Wildcats found some offensive rhythm and were finally able to challenge Gaylord keeper Jacob Pietrzak.

Ivo Arvidsson-Ullberg had a chance with just under 10 minutes left, racing to try to beat Pietrzak to a loose ball, but Gaylord’s backstopper got there first and punted the ball away.

Then with 6:20 left, Alpena appeared to score a goal off a set play, but the Wildcats were whistled offsides. They finally connected when a ball landed right in front of Tagliareni with 4:57 left and he buried the chance.

For much of the game, Alpena tried to upend Gaylord’s defensive efforts with long kicks, but the Blue Devils were prepared and seemed to be in just the right spot each time to send balls back the other way. One such instance came with about nine minutes left in the first half when a Gaylord defender stepped in front of the path of a free kick from in close and gave possession back to the Blue Devils.

“There’s a lot of little differences in the game,” Storch said. “We go down 2-0, then we had to completely chase the game and move a lot of people around to try and generate more attack.”

The Blue Devils–who beat Alpena twice in September by 2-0 and 2-1 scores respectively–struck first in the district final after Holscher scored on a penalty kick, breaking a stalemate with 20:12 left in the first half.

Gaylord was awarded the kick after Alpena was whistled for a handball violation in the box. Holscher drove the ball home past Alpena keeper Wenton Harrison to give Gaylord a 1-0 lead.

Harrison–who will graduate as Alpena’s all-time shutout leader–played a solid game for the Wildcats in his final appearance. Less than 10 minutes in, he jumped up to stop a straight-on shot from Riley Gapinski and he denied a chance from Marcus Osborne ORourke in the right corner 30 seconds into the second half.

Busch put Gaylord up by two with 24:54 left, scoring from the middle of the box after the Wildcats had trouble clearing the ball out.

“In the second half we started playing better. I’m not sure how (Busch) scored,” Storch said. “We had one like that in the first half that Ivo shot wide and they had their shot in.”

Gaylord’s defense did a solid jump containing Alpena’s offense and what chances the Wildcats had were few and far between. Arvidsson-Ullberg launched a shot wide right with 10:48 left in the first half and another Alpena chance went wide right less than seven minutes into the second half.

It also saw Alpena win in the playoffs, something the Wildcats hadn’t done since 2004 and Storch said the season was a good sign of progress for the program.

“A big step for the program and unfortunately part of growing is to deal with disappointment. This is part of the hunger that the program has to go through to take that next step,” Storch said.