Staying in the moment 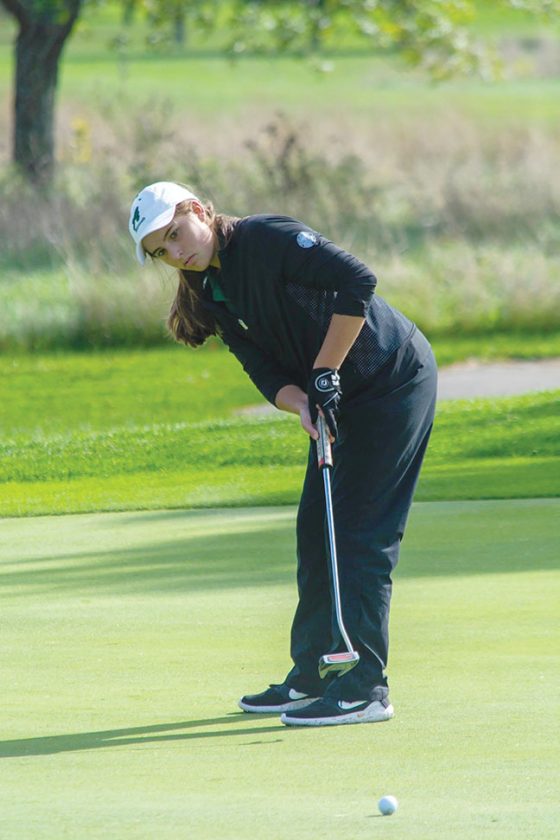 Courtesy Photo Alpena junior Kennedy Ellis watches a putt during a golf match this season. Ellis will compete in the Division 2 state golf finals this weekend in East Lansing at Forest Akers East Golf Course. Ellis is the third Alpena female golfer to compete in the finals in the last four seasons.

Focus on the moment.

That mindset has paid off in spades for Kennedy Ellis this season and if she can do it this weekend, it might just propel her to even higher heights.

Ellis, an Alpena junior, will compete in the Division 2 state golf finals this weekend at Forest Akers East in East Lansing.

Two years ago as a freshman, Ellis saw her teammate and team captain Courtney Nunneley play her way to the finals during a record-breaking season. At the time, Ellis told herself she wanted that same opportunity and she’ll get it this weekend.

“Yes definitely (it was a goal) after being in a regional my first year and seeing one of my captains make it,” Ellis said. “I knew that was something I wanted to do.”

Not bad for a golfer who’s only in her third year playing the sport competitively.

Ellis will be the third Alpena girls golfer to play in the state finals in the last three seasons after Lizzy Heath (2016) and Nunneley (2017).

“We’ve seen an incredible amount of growth in a short amount of time,” Alpena coach Tate Skiba said of Ellis. “I said at the beginning of the year she had a lot of potential and she’s tapping into it. The amount of work she’s put in is starting to pay off.”

Ellis punched her ticket to East Lansing by firing an 81 at regionals in Midland last week. Ellis’ score was five shots lower than her previous tournament best, but it still came as a bit of a surprise. As a freshman, she shot 118 at regionals and followed up with a 107 last season.

Entering her junior year, Ellis said she felt some internal pressure to reach the finals and everything came together at this season’s regional, where she tied for second after carding her 81.

“Throughout the round I knew I was playing well, but I didn’t look at the score. I just focused on staying in the moment,” Ellis said. “When I finally realized I’d made it, that’s when it became more real and I was really happy.”

Heading into the weekend, Ellis has worked on all aspects of her game, especially chipping and putting. Armed with plenty of technical knowledge of the game, she’ll hope to pair it with a strong mental makeup, which Ellis says allows her to stay focused.

Golf tends to be a social sport and Ellis said she’s made some strong friendships on the course. But once Friday’s opening round begins, she’ll lock in mentally, keeping a razor-sharp focus while focusing on the present, instead of worrying about past shots or future challenges on the course.

“It’s easy to think, ‘Oh my goodness, I’m here (at the finals),’ but I keep myself focused,” Ellis said. “I don’t think too much about what’s ahead.”

Ellis’ focus could pay off this weekend at Forest Akers East, a course that’s longer and has faster greens than most of the courses she’s played this season. Ellis, who competed in the elite division of the Northern Michigan Tour this summer, played Forest Akers East during the summer and Skiba said she’ll do well if she sticks to playing her game.