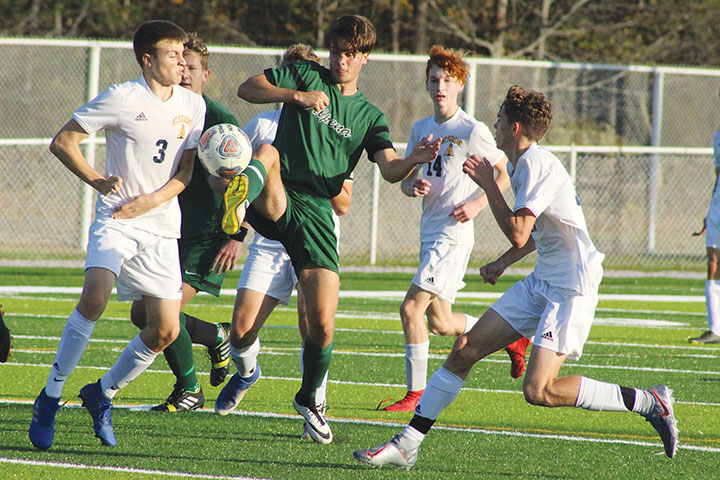 News Photo by Jonny Zawacki Alpena’s Ivo Arvidsson-Ullberg (5) tries to kick a ball past Mt. Pleasant’s Gabriel Gorsich (3) during the first half of Division 2 district soccer game on Thursday at Park Family Field at Wildcat Stadium. The Wildcats shut out the Oilers 5-0 to advance to Tuesday’s district semifinal game against Bay City John Glenn.

The Alpena High soccer program has come a long way since head coach Tim Storch took over in 2011.

The Wildcats are enjoying one of their best seasons in team history and on Thursday, Storch and his group of Wildcats achieved another milestone as Alpena won its first postseason game under Storch when it shut out Mt. Pleasant in a Division 2 district quarterfinal game, 5-0 at Park Family Field at Wildcat Stadium.

“It’s been nine years coming and it feels good for sure. We’re beating teams now that was mercying us by halftime so to see the program is now beating those schools is nice,” Storch said. “I don’t think it was our best performance by a long shot, but it was good enough. I’ve always said, good teams win when they don’t play well. There’s a lot of things that I pick apart and say we didn’t play well and we could have done a lot better, but at the end we were good enough today to win this game, but I think we all know this will not be good enough if we were playing one of our Big North Conference foes so we’ll need to play better next week.”

The Wildcats applied the pressure early on Mt. Pleasant, controlling the game in the early stages, but failed to get a clean shot off.

The Oilers had a golden opportunity 11 minutes in when Zachary Haggart-Madison ripped a shot in front of the net, but Alpena goalkeeper Wenton Harrison made a huge save, deflecting the ball over the net to keep the game scoreless.

Harrison’s save seemed to give the Wildcats some energy as they opened the scoring nine minutes later on a beautifully executed pass and kick as Mike Clark sent a pass sailing through the air to Grant Botha, who kicked the ball in mid flight and sent it into the back of the net to put Alpena up 1-0 midway through the first half.

“My back line wasn’t as sharp as they have been, I thought we were letting them get through too many times. Wenton wasn’t called upon to make a lot of saves, but that was big because you don’t ever want to go down in a state tournament game because strange things can happen and the whole complexion of the game changes if we’re having to play from behind,” Storch said.

The Wildcats added one more goal before the half as Botha sent a pass to wide open Caleb Zaborney, who snuck behind the defense and sent the ball into the far corner for a goal to give Alpena a 2-0 lead at the break.

The Wildcats continued their strong play in the second half as five different players scored goals in the contest.

Less than five minutes into the second half, Craig Tagliareni sent a long shot on net that bounced into the net as Ivo Arvidsson-Ullberg tried to deflect the shot, but caused the Mt. Pleasant keeper to whiff on the ball and the Wildcats took a three goal lead.

Seven minutes later Alpena added a fourth goal and Arvidsson-Ullberg capped off the scoring with 3:53 to play as he found the back of the net for the 25th time this season, bringing him one goal shy of tying the school record for goals in a season.

The Swedish striker is also one assist shy from tying the school record for assists in a season and with the victory, Alpena earned their 16th win of the season, tying a program record for wins in a season.

The winner of Tuesday’s game will advance to the district championship game next Saturday at 1 p.m. against the winner of Gaylord and Cadillac.

Alpena defeated John Glenn 1-0 in the first ever sporting event played on the Wildcats’ new turf earlier this season and Alpena looks to add to an already magical season.

The Wildcats are focused on setting a new wins record and making a run at their first district title since 1997.

“It would be great to win and achieve all of that. It’s all right in front of us. You’re looking at a chance to get the 17th win on the season and a mark that Alpena soccer has never achieved and more importantly a chance to play for a district championship,” Storch said. “We would love to have that opportunity to be playing for a district title next Saturday. We’re happy to move on. There’s 128 teams that start and there’s 64 teams left and we’re one of them.”