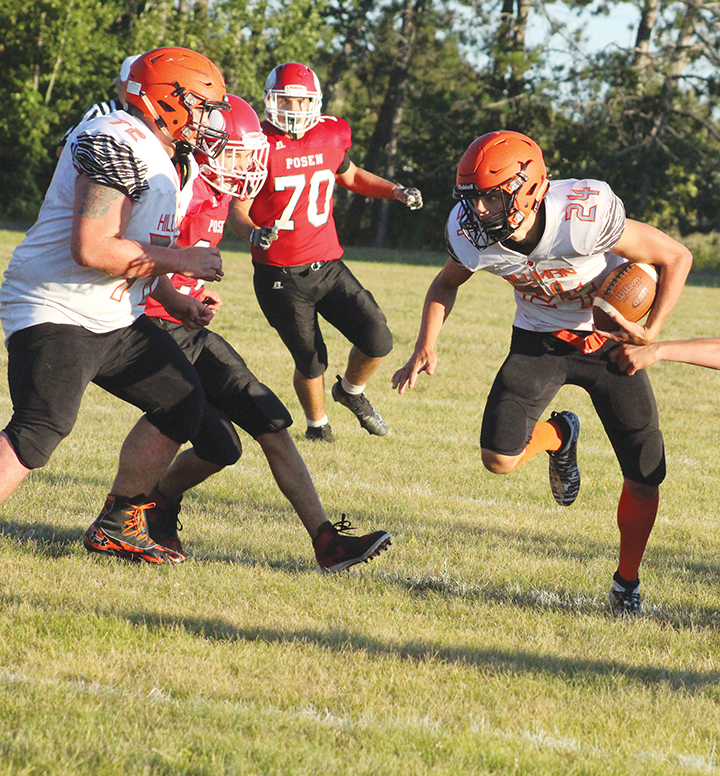 News Photo by Jonny Zawacki Hillman quarterback Nash Steinke (24) eludes Posen defenders during the second quarter of a football game on Friday night at Posen High School. The Tigers defeated the Vikings 36-14 behind a strong defensive effort in the second half.

POSEN — For the first time, Hillman and Posen opened a new season lining up across from each other.

Early on, the game featured a lot of what you would expect in an opener as both teams made costly mistakes and both teams played a tightly contested first half. But adjustments in the second half and a strong defensive effort propelled Hillman to 36-14 season-opening victory against Posen on Friday at Posen High School.

“There was a lot of you basic first game jitters in the first half and we weren’t playing physical enough. We made a couple of adjustments in the second half and the defense really took off,” Hillman coach Cody Allen said.

Despite a close score, much of the first half was controlled by the Vikings. They held a lead throughout the first half and scored the game’s first touchdown when Wyatt Romel scooped up a loose football and returned it 22 yards the other way to put Posen on top 6-0 with 4:22 to play in the opening quarter.

Hillman responded by putting together an 11-play drive that covered 63 yards and ended with Gunner Mellingen powering his way into the end zone for a three yard score to tie the game at six with 10 seconds left in the first quarter.

Both teams committed a turnover a piece in the second quarter and both defenses were up to the challenge.

The Vikings broke the tie after taking advantage of a short field when they turned Hillman over on downs. Posen needed just four plays to find pay dirt as Chase Dubie rumbled his way in for a three yard touchdown to give the Vikings a 14-6 lead with 21 seconds left in the half.

Just when it looked as if Posen was going to take momentum into the break, Mellingen took the ensuing kickoff up the middle 65 yards and was untouched on his way to the end zone to cut the lead to 14-12 at the half.

“We still thought we were in pretty good position, but that kickoff was talked about at the half. He (Mellingen) is a heck of a good player and hopefully we will learn from that mistake,” Posen coach Greg Pietsch said. “Hats off to Hillman and their coaching staff. They had a marvelous game plan and their kids play really physical. I have nothing but respect for them and turnovers hurt us tonight.”

After a scoreless third quarter, the fourth quarter belonged to the Tigers. Hillman revved up the pressure defensively and made life difficult for the Vikings’ offense.

Dubie led the Vikings with 150 yards on 21 carries, 92 of those yards came in the first half half along with a score, but Hillman did a good job limiting Dubie, quarterback George Kroll and the rest of the Posen offense in the second half.

“They brought a lot of pressure and played really physical. It’s the way football is supposed to be and Hillman did a great job tonight,” Pietsch said. “We have a lot to work on and get better at and we will work and we will get better. We have a lot that will be emphasized, especially our conditioning because we wore down at the end of the game.”

Caleb Sanders scored on a one yard touchdown run to give Hillman its first lead of the game at 20-14 with 10:32 to play the fourth quarter before Posen started making costly mistakes down the stretch.

The first turnover of the quarter was huge as Thomas Williams scooped up a loose ball and raced into the end zone from 29 yards out to extend the Tiger lead to 28-14 with 4:59 remaining.

The Vikings were driving and looked as if they were going to cut into the lead, but coughed up the football at the 16 yard line and the Tigers pounced on it.

Hillman added one more touchdown late as Mellingen scampered into the end zone for a 26 yard touchdown to put the game out of reach with 3:41 remaining and give the Tigers the win on opening night.

“We just wanted to do what we could to mix it up a little bit tonight offensively and it took us a while to get going, but when we did we looked good,” Allen said. “We definitely wanted this tough game early and I think this will really prepare us going forward.”

The Tigers found success through the air and on the ground as Isaac Morrison caught five passes for 108 yards including a crucial catch on third and short late in the game.

Mellingen had 62 yards on seven carries and caught four passes for 36 yards and had three touchdowns. Sanders was banged up early in the game, but churned out 49 yards on the ground the Tigers provided a healthy dose of Sanders down the stretch to close the game out as the senior running back toted the rock 14 times on the night.