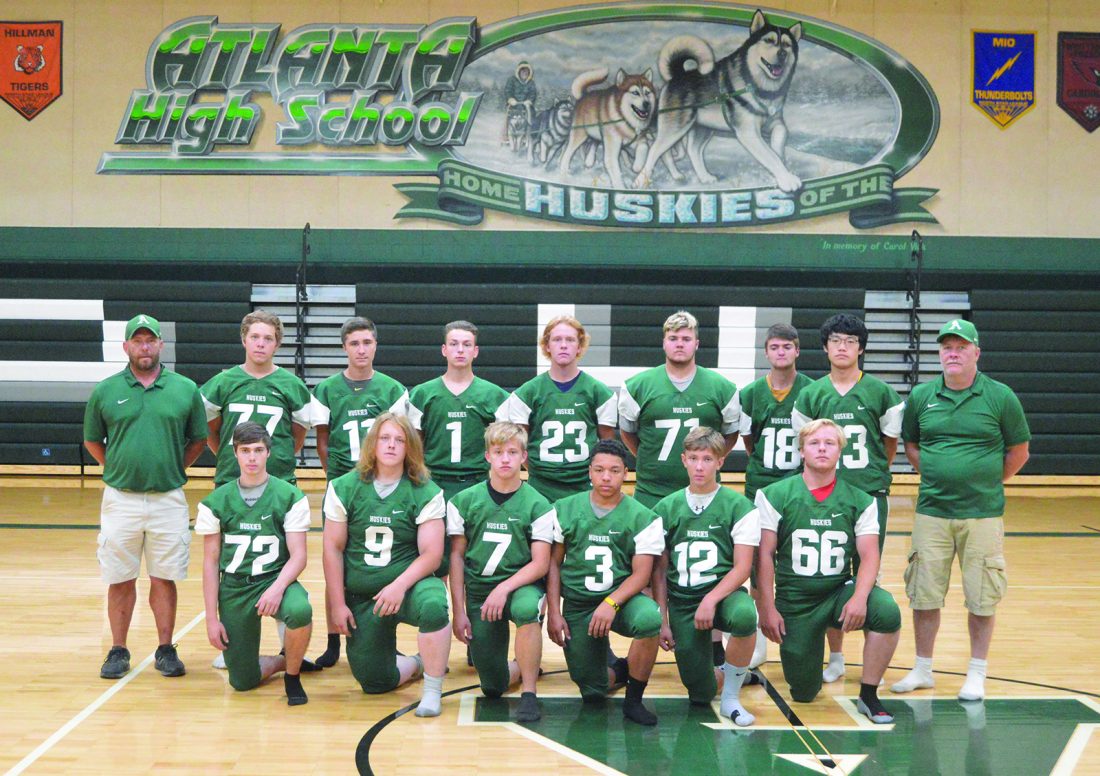 ATLANTA — It’s not a stretch to say the Atlanta football team took its fair share of lumps last season.

The Huskies struggled against several bigger and stronger teams on the way to a 2-7 record.

But with eight returning players, who are all a year older and a year more experienced, the Huskies are aiming to get back on a winning track in 2019. The Huskies enter their third year of eight-player football with a solid mix of players, including eight upperclassmen.

“We do have a handful of starters back this year. We have 14 on the roster right now and I think if we can keep them eligible and healthy we’ll be in the pretty good shape,” Atlanta coach Troy Cheedie said. “The younger guys that we’re getting into the program have all played eight-man in their youth football, so they’re used to it and they know what to expect with the eight-man game.”

After making the playoffs in 2017 as a new eight-player team, the Huskies learned some hard lessons last season, especially against playoff-bound teams. The Huskies enter the 2019 season with renewed commitment to getting faster, stronger and keeping up with every team they play.

“We learned a lot about the technical part of playing football, but we also learned about the importance of being in the weight room and we need to be getting stronger. A lot of teams we played last year–Hillman, Au Gres–they were big, physical teams and we had younger guys who weren’t quite as physical,” Cheedie said. “It was an eye-opener for them. You can hear the weights up there, so they’re getting on it and they’re getting stronger.”

The Huskies averaged just 14.2 points per game last season, but with several players returning, particularly at the skill positions, Atlanta should be able to increase its offensive production, especially in Atlanta’s balanced offense.

At the heart of Atlanta’s offense is returning junior quarterback Aaron Cuzzort, who enters his third year of varsity football and second as the starter. Cuzzort has plenty of dual-threat playmaking ability, having racked up nearly 1,500 yards of offense last season (957 passing yards and 531 rushing yards) along with 14 touchdowns.

In the backfield, Atlanta returns junior Ethan Byrne and sophomore Trace Juergens. Both players showed flashes of big-play ability last season running the ball, but also caught their fair share of passes. Juergens rushed for 222 yards last season and had 271 receiving yards. Byrne had 128 receiving yards. Cheedie expects both of them to split time in the backfield along with playing at slot back.

Teets and Forrester have plenty to offer the Huskies from a football standpoint, but Cheedie said their leadership has really come through in their commitment to offseason training. Teets and Forrester have been among Atlanta’s workout warriors during the offseason and Cheedie pointed to Teets as a prime example of players benefiting from training. When Teets entered the program as a freshman weighing around 300 pounds. Four years later, he weighs 222 pounds and Cheedie said he’s in the best shape of his life.

“For the younger guys to see that a guy like Joe can do that, it’s awesome leadership in itself,” Cheedie said. “Those are the two biggest guys I have in the weight room. All summer and all winter, they’re encouraging guys to get in there and they push themselves a lot.”

Cheedie will look to senior Matt Meyers and returning junior Steven Bilski to catch passes and he’s also hopeful sophomore Trenton Whitt, who is currently battling illness, returns to the lineup at some point this season.