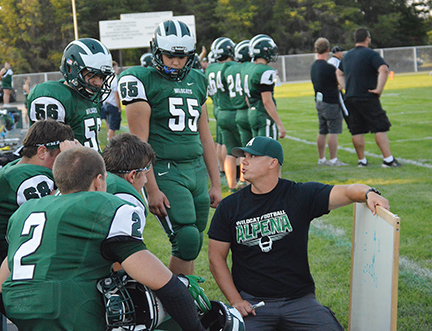 Aaron Sims made the decision on Tuesday and ends his Alpena tenure with a 7-20 record.

“The decision for me really came down to doing what’s best for our family. There were opportunities that opened up and this is just a family decision,” Sims said. “I want to give a special thanks to all of the athletes that I’ve had the opportunity to work with and coach over the past three years. I truly appreciate the hard work that the athletes put in because they did put in a lot.”

Sims’ coaching career will continue as he and his family plan to move to Belding where Sims will become an assistant coach while he continues teaching social studies at Belding.

Sims took over as Alpena’s coach in 2016 after a successful stint at Hesperia. Under Sims and the Wing-T offense he implemented, the Wildcats had a lot of success running the football. Two Alpena running backs–Alex Arch in 2016 and Logan Guthrie in 2018–ran for more than 1,000 yards in a season.

Sims finished his coaching career at Alpena on a winning note after the Wildcats upset football power Chelsea last year in the regular season finale.

Whitmer backs police changes after deaths of Floyd, others nationwide