‘Quite quiet’: Many businesses still open, but fewer customers 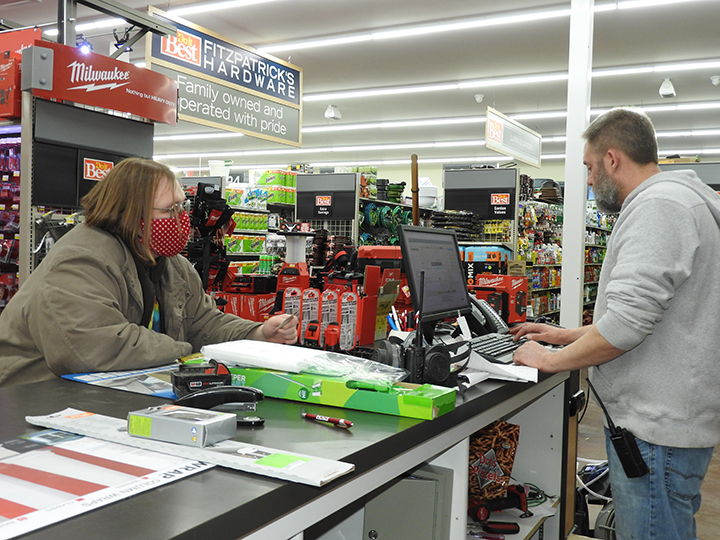 News Photo by Crystal Nelson Alpena resident Kendall Irwin, left, wearing a face mask to protect against the coronavirus, on Tuesday stops at Fitzpatrick’s Hardware and Lumber to get some supplies to unflood his basement. He was helped by employee Brian Mayo, right.

Whitmer’s Monday order asks Michiganders to stay home unless they’re grocery shopping, visiting the doctor, caring for a loved one, or are among a list of workers “necessary to sustain and protect life,” including employees at hospitals and doctors’ offices, grocery stores, financial institutions, transportation-related businesses, and the news media. All other businesses have been directed to close until at least April 13.

On Tuesday, much of Alpena seemed to be businesses as usual, with many area establishments considered essential, though services were scaled back and business owners reported fewer customers.

The Monday order was part of Whitmer’s efforts to slow the spread of the coronavirus, confirmed cases of which neared 1,800 on Tuesday, with 24 deaths. There were no confirmed cases in Northeast Michigan. 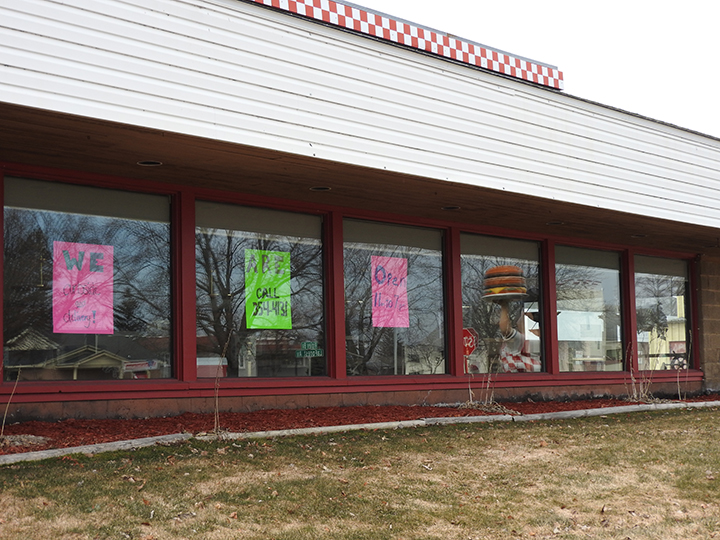 News Photo by Crystal Nelson Poster boards hang in the windows of the Big Boy restaurant on Ripley Boulevard to notify the public the restaurant is open for carryout.

∫ MidMichigan Health, the Midland-based owner of the Alpena hospital, announced an additional ambulatory testing center is slated to open later this week at the Family Medicine at 211 Long Rapids Road.

∫ The Alcona County Road Commission is suspending non-essential road maintenance work to protect employees and the public, though crews will continue to monitor the safety of the roads.

∫ SpartanNash announced Tuesday it has begun installing clear “sneeze guards” at its 155 stores, including at the Family Fare grocery stores in Rogers City and Lewiston. 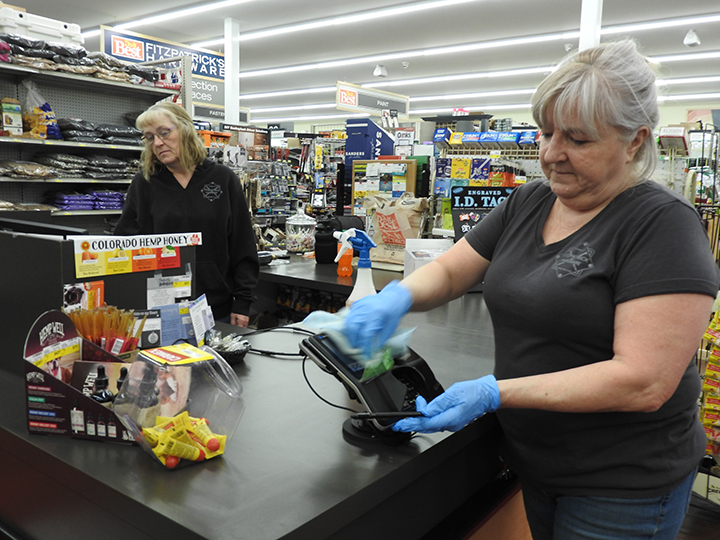 News Photo by Crystal Nelson Fitzpatrick’s Hardware and Lumber manager Jean Shiemke on Tuesday sanitizes the pinpad at the store.

∫ Meijer announced it would stop accepting can and bottle returns at its stores until the coronavirus crisis has passed.

A company called Unacast used smartphone GPS data to measure how much people changed their amount of travel and scored counties on residents’ responsiveness to “social distancing” mandates. Michigan as a whole got an A, with a 45% decline in average distance traveled, as did Alpena County, with a 42% drop. Presque Isle County got an F, with a 9% drop, Montmorency County a C, with a 26% drop, and Alcona County a D, with a 15% drop.

Fitzpatrick’s Hardware and Lumber in Alpena was among the businesses that remained open on Tuesday.

Manager Jean Shiemke said the hardware is considered an essential business because it sells propane and pet food and items people need when things break down at home. Shiemke said the store was “very busy” on Monday, before the executive order went into effect, but, on Tuesday, “It has been quite quiet.

“People seem to be doing what the governor has asked for the most part,” she said. “You still have some people who are not abiding by the rules, but most people are coming in for necessities — you know, plumbing and heating.”

Although the business remained open, adjustments have been made. The hours were shortened and staff was cut in half, she said.

Many of the small businesses in Alpena’s downtown were closed, except for a handful of restaurants offering delivery and takeout, automotive stores, and financial institutions.

Anne Gentry, executive director of the Alpena Downtown Development Authority, has been in contact with many of the downtown business owners, passing along information about mandatory closures and other information from the state.

Gentry said a lot of businesses have closed temporarily because they fall into the non-essential category. Takeout or delivery isn’t bringing the same number of customers restaurants usually see.

“I think people are still in the phase of trying to see what way they can offer some of their services in a way that’s compliant with the orders but certainly not near the same amount of income as it would normally be,” she said.

Mike Mahler, director of economic development at the Alpena Area Chamber of Commerce, said Alpena has a great diversity of businesses and some are going to be impacted more than others.

“I have had a single business reach out to me already — trying to be proactive because they are experiencing significant financial hardship and want to know if there is something Target can do for him,” he said, referring to Target Alpena, the Chamber’s economic development arm.

Mahler said Target Alpena was one of two agencies in northern Michigan selected to receive and distribute Michigan Strategic Fund money to businesses in 11 counties.

“These dollars are meant to basically be for working capital — to make payroll, to make their rent payment, to make their loan payment — so that is actually what the money is going to be designed for,” he said.

Small businesses with fewer than 50 employees can apply for those grants. Businesses have to be directly impacted by the shutdown and grant applications are capped at $10,000.

Mahler said he doesn’t know how much money Target Alpena will receive, but the state is supposed to let them know on Friday. A committee with representatives from all five counties will be formed to choose which businesses get the money.

There is also a task force in the works to help connect local business owners with available resources.

The effort will work to serve those with critical needs throughout the shelter-in-place and quarantine phase and during the rebuilding process in the future, according to a press release from the Alpena Area Convention and Visitors Bureau.

Stutzman reports the group has already created a Facebook group called Alpena Area: Covid19 Business Resources to provide local business owners with a centralized location for the latest links to assistance programs and other information.

News staff writer Meakalia Previch-Liu contributed to this report. Crystal Nelson can be reached at 989-358-5687 or cnelson@thealpenanews.com.

News Photo by Crystal Nelson Poster boards hang in the windows of the Big Boy restaurant on Ripley Boulevard to notify the public the restaurant is open for carryout.

News Photo by Crystal Nelson Alpena resident Kendall Irwin, left, wearing a face mask to protect against the coronavirus, on Tuesday stops at Fitzpatrick’s Hardware and Lumber to get some supplies to unflood his basement. He was helped by employee Brian Mayo, right.

News Photo by Crystal Nelson Fitzpatrick’s Hardware and Lumber manager Jean Shiemke on Tuesday sanitizes the pinpad at the store.