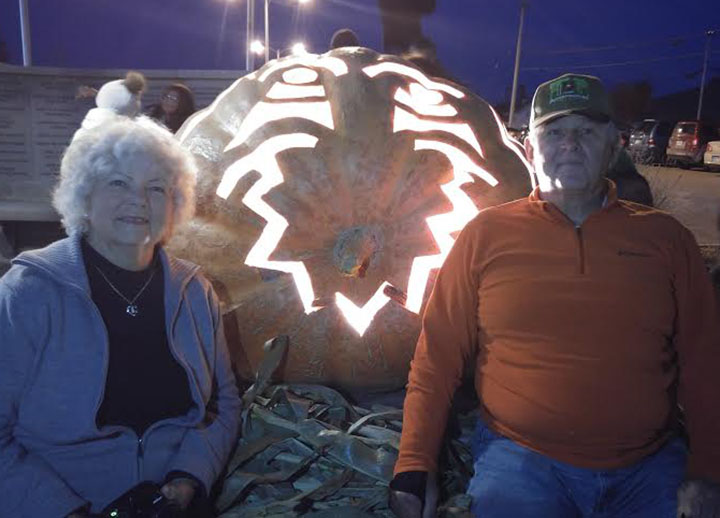 News Photo by Crystal Nelson Ouida and Jim Smythe, of Rogers City, on Thursday attend a pumpkin lighting at the corner of Third and Erie streets for the pumpkins that Jim grew. The two pumpkins weighed in at 854 and 892 pounds.

ROGERS CITY — Jim Smythe has only been growing giant pumpkins for two years, but his hobby is quickly becoming a favorite pastime for the residents of Rogers City.

Curious residents have been stopping by his house on Detloff Street all summer to check on his pumpkins and watch them grow. Now, they get to share in the enjoyment as the pumpkins go on display in Rogers City’s downtown.

About 175 people turned out for the city’s first-ever pumpkin lighting ceremony on Thursday evening at the intersection of Third and Erie streets for what officials hope will become an annual event. Mayor Scott McLennan attended dressed as Charlie Brown, and one couple reportedly drove up from the Detroit area for the event.

His city’s enthusiasm for his hobby has Smythe and his wife, Ouida, delighted.

“We have had so much fun with this thing,” he said. “My wife and I both met so many people, we kind of just have to do it now. It’s a lot of hard work, starting in April, and you don’t finish up until September, October. But it’s a fun hobby. It really, really is.”

Smythe’s hobby takes the hours of a full-time job.

Smythe says he spends between six and eight hours with his pumpkins each day when they are growing, fertilizing, spraying for bugs and fungus, making sure the vines are positioned straight, and trimming off the excessive growth from those vines. He estimates it costs $400 to grow each pumpkin, not including the cost of his municipal water bill.

The Smythes moved from Maine to Rogers City in 2016. Jim Smythe said that, prior to moving, he had grown big pumpkins weighing 100 to 150 pounds. He continued growing them after moving to Rogers City.

“I was getting better and better at it, and I said, ‘Well, let’s just try some big stuff,” he said. “So I got some really good seeds, and that’s the way it started.”

Smythe grew a giant pumpkin weighing 518 pounds last year. This year, his three pumpkins weighed in at 707, 854, and 892 pounds. Smythe took his pumpkins to the Great Pumpkin Commonwealth’s Central Great Lakes Weigh-off in St. Johns, where he came in 12th place out of 26 places.

“There’s a few things I’m going to do differently next year, and hopefully boost that weight up a whole lot,” he said, saying he will use the seeds he grew this year to grow next year’s giant pumpkins.

The enthusiasm surrounding his pumpkins have got city officials thinking they could hold a giant pumpkin weigh-off or some kind of fall festival in the city next year. Kim Margherio, director of events for the Rogers City Downtown Development Authority, said officials are “embracing it whole-heartedly.”

“We have a strong will here,” she said. “When we want something, we make it happen.”

Kaelie Fessler, 4-H program coordinator with the Michigan State University Extension office in Presque Isle, said the agency will help find funding for the event. Fessler said officials also hope to bring some of the area’s youth into the excitement.

“We will be encouraging them to be part of the fun by growing their own giant pumpkins,” she said. “Seeds will be provided in the spring to youth who would like to participate.”

Smythe said he has some ideas to incorporate some “old-time, down home” fun into the festival, such as a pumpkin catapult, pumpkin drop, or apple pie eating contest. He believes they could draw an awful lot of people into the city with a pumpkin weigh-in and festival.

“It’s not only pumpkins — it’s long gourds, it’s squash, it’s watermelons, it’s marrows, it’s giant tomatoes — several different things they weigh off at the same time,” he said. “We could pack this place.”