‘Always willing to jump in’ 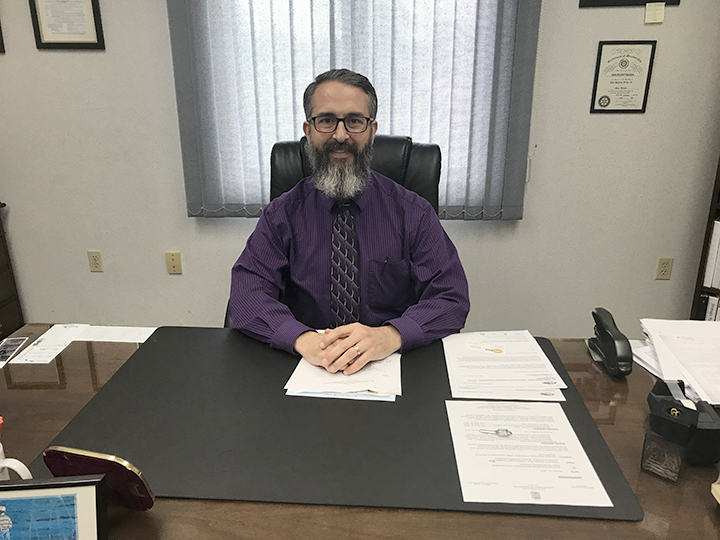 News Photo by Julie Goldberg Scott Reynolds, superintendent of the Alpena-Montmorency-Alcona Educational Service District, is seen here on Tuesday in his office. Reynolds has been the ESD superintendent for two years and is ready to continue growing the ESD and helping K-12 districts in Northeast Michigan.

ALPENA — Two years after Scott Reynolds took over as superintendet of the Alpena-Montmorency-Alcona Educational Service District, he has lots of goals to help the district flourish.

Reynolds was selected by the ESD Board of Education in 2017. He was Pied Piper School principal for three years before becoming the leading man in the district. He decided to move to the area with his family because he’s attracted to the environmental resources.

“I’ve just been fortunate that my skills set and experience led me to a position where it was critical to have strong experience in special education and general education leadership,” Reynolds said.

Reynolds, 48, said the culture of the ESD is very positive and the community support is very strong, so superintendent is an ideal position for him to be in both personally and professionally.

Reynolds’ list of goals for 2019-20 school year is long, but he’s confident those goals can be completed by him and the ESD staff.

He wants to continue advancement of the district’s strategic plan that was implemented in May 2018. One part of the strategic plan is facilities upgrades. Reynolds has taken on direct supervision of that within the organization, so that’s part of his day-to-day operations, and will be a big focus for him this upcoming school year.

Another goal is advancement of technology, so there is improved efficiency and data for instructional development.

A couple organizational goals within the ESD are a strong administrative team and a great overall staff to keep building the district’s mission, Reynolds said.

Reynolds would also like to see the district grow its relationship with legislators and the community. Voters approved a special education millage in November 2016 and Reynolds said the district did an informative campaign while that was on the ballot, but he wants more.

“We’ve been recognizing the need to advance that educational platform to the community at large so that we’re not taking it for granted what people don’t know about us and we’re not waiting until the millage renewal to explain what we do,” Reynolds said.

Reynolds also wants to see continued advancement in the use of data to make decisions.

He said an important part is what the ESD can do to help serve local districts, making it important to build strong relationships with district leaders and their staff.

“I anticipate that, as we continue to grow as an organization, we’ll continue to work to be responsive to those more urgent needs that exist and help them to support the students,” he said.

The hardest thing, Reynolds said, about being a superintendent is seeing his staff work hard and gather data to support needs, only to realize there are inadequate funds from the state and federal governments to support those needs.

“Our community has done more than their fair share to try and help support us, and, while our ESD is not funded as strongly as other ESDs, there’s also some ESDs that aren’t funded as well as us,” Reynolds said. “We have those needs and it’s difficult, because we want to do more and there are districts that are going without services and supports because we don’t have the resources to be able to give them what they need.”

On the other hand, the best thing about being a superintendent is being able to work with a team that wants to get things done on behalf of kids, Reynolds said.

He can see that directly when he goes to Pied Piper’s graduation. To him, that’s one of the most rewarding events to attend.

Alpena Public Schools Superintendent John VanWagoner said Reynolds is easygoing and works with all the superintendents in the area.

“He is always learning and always willing to jump in,” VanWagoner said of Reynolds. “He works with the Michigan Department of Education to understand the help that we need in the districts.”