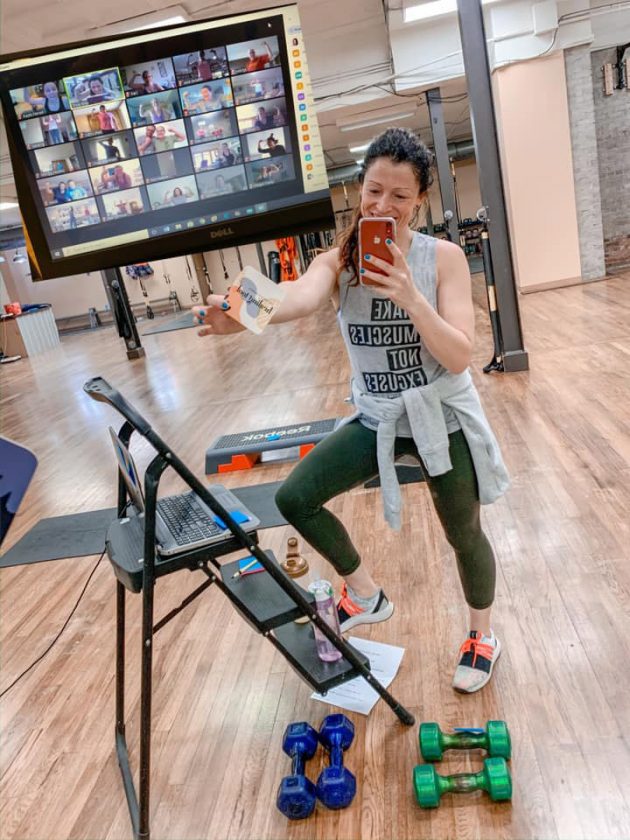 ALPENA — In the wake of the coronavirus pandemic and numerous stay-at-home orders in place around the U.S., Americans have looked for anything — no matter how big or how small — that gives them a sense of routine.

For Brenda Budnik, that means setting aside time each day to work out.

Budnik, who works as a dental hygienist in Alpena, has been unable to work since mid-March. Since then, she’s made sure to work out at home every day with virtual classes provided by Bay Athletic Club.

It isn’t the same as going to the club and breaking a sweat, but it keeps Budnik active, keeps her safe at home and allows her to connect with her fellow club members.

“I am thankful for the opportunity to virtually workout with my BAC family,” Budnik said. “I can’t imagine going through COVID-19 without each other.” 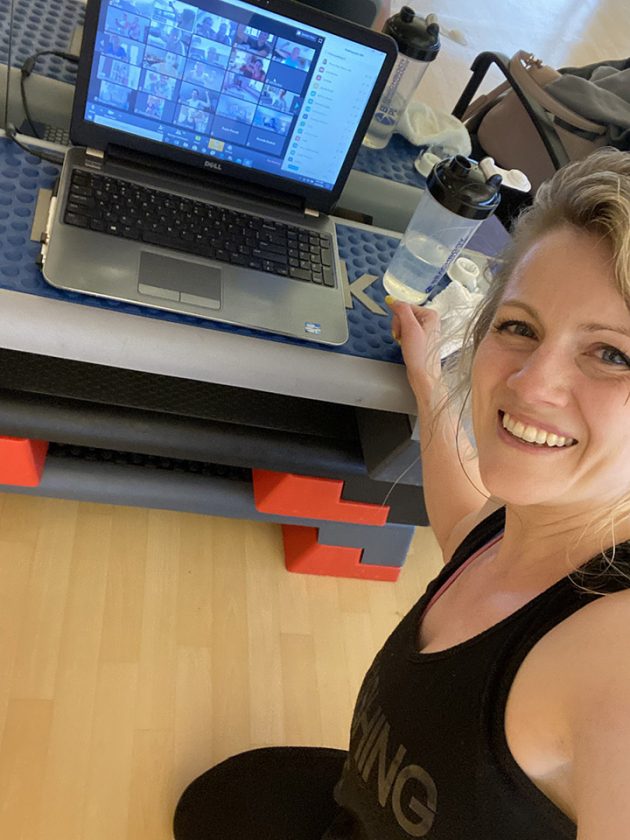 Courtesy Photo Amanda Freeland, membership and nutrition director at the Bay Athletic Club, snaps a selfie while leading a virtual workout at the gym in this provided photo.

Since the middle of March, virtual classes have been the new normal for Bay Athletic Club, with instructors leading workouts for members through the videoconferencing app Zoom.

Instructors lead virtual classes from the club’s empty studio spaces while members participate in workouts in the comfort — and safety — of their living rooms, basements, and home offices.

It’s a different way of working out, to be sure, but, so far, people are buying in. Total participation in BAC’s virtual classes was more than 1,700 as of April 1, with an average of 30 households per workout.

The numbers offer an encouraging sign on two levels during a time when social distancing is encouraged: People are staying active, and they’re connecting with one another. 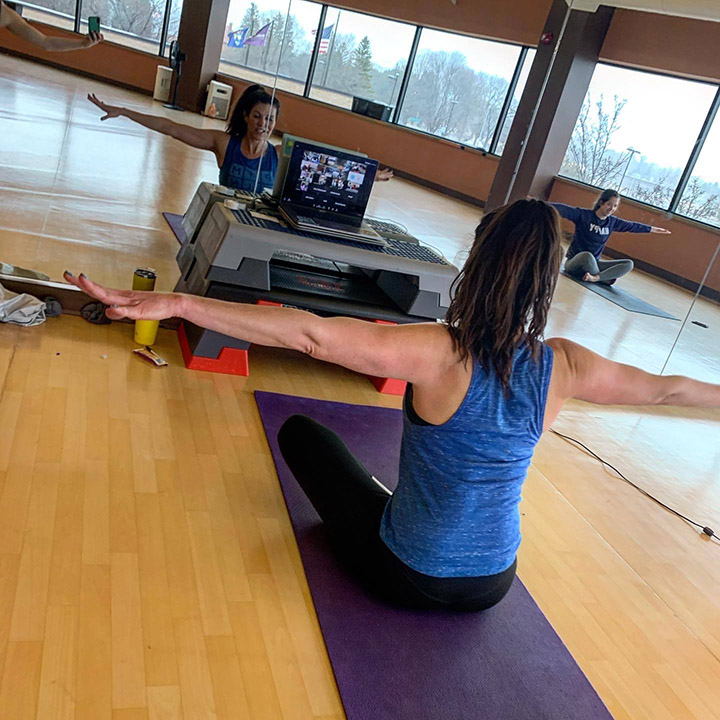 “People need activity and they need human connection,” BAC CEO Trina Gray said. “To have our doors close is understandable, but it’s hard for people who have made health and fitness a part of daily life. Having these classes gives people a sense of routine, a sense of normalcy.”

When Gov. Gretchen Whitmer issued an executive order on March 16 requiring non-essential businesses such as coffee shops, gymnasiums, fitness centers, and movie theaters to close temporarily, Bay Athletic Club closed its doors at 3 p.m. for the first time since it opened in Jan. 2006.

Less than three hours later, BAC was back up and running and the club’s first virtual class — a Turbo and Abs class taught by Gray — began at 5:30 p.m., with nearly 40 members participating.

The club also loaned workout equipment to members, arranging pick-up times for must-haves like step benches, dumbbells, and bands, trusting members will take care of them.

“I’m grateful that I have a great team,” Gray said. “We could see a trend nationally of businesses closing, and we know in the community people rely on workouts for physical and mental health. We’ve close to tripled original expectations, and it shows me how much people want activity and connection.”

Whitmer’s executive order permits employees of a business to do a minimal amount of work to continue operations. The club’s instructors are still able to enter the facility and lead virtual workouts alone in empty studios. The rooms are continuously sanitized.

Adapting to virtual classes has had its challenges. While Zoom can be used on a variety of platforms, there’s been the occasional technical glitch or two. In some cases, members have used household items such as detergent bottles or canned goods as substitutes for traditional equipment like dumbbells.

But Zoom’s popularity and user-friendliness have allowed members of all levels of technical savviness to participate.

“I’m the least techie person, but, when I knew it could connect me to members, I didn’t hesitate,” Amy Schultz, a BAC group fitness instructor, said. “At Bay Athletic Club, we always put our members first and our members are forgiving, because they know we’re in uncharted territory.”

That human connection is perhaps the most important aspect of BAC’s current operations. At a time when social distancing has crept into nearly every aspect of life, club members — whether they are year-round Alpena residents or snowbirds staying active in warmer locales — are thrilled to see one another during virtual workouts.

“It’s been emotional, and it’s been great,” Schultz said. “When we connect through Zoom, we’ve been driven to tears. It’s amazing to take something so familiar and bring it into someone’s home.”

Bay Athletic Club has encouraged interaction on social media, as well, offering daily prizes for members who post post-workout selfies on Facebook and tag the club. The flood of positive comments left on the club’s Facebook page are proof the club’s efforts are working and offering members a respite, however brief, from the uncertainty of the world around them.

“I am so appreciative of the BAC Team,” Budnik said. “They have really stepped up to help their members and our community stay active and stay moving.”

In the first week of virtual workouts, the club offered 19 different classes. Since then, members have been able to participate in workouts such as Zumba, yoga, strength workouts, PiYo, Pilates, and step workouts, among others.

The variety gives members plenty of options for staying active, and Gray and her staff have tried to offer as many helpful tools as possible. That includes Fit in 5 classes — quick early-morning workouts — as well as easy workouts for kids, nutrition tips, and playlists made by instructors for their respective classes.

Ultimately, instructors have found the online fitness has also encouraged others to get up and get moving. Members signing in for classes are often joined by their significant others and children as they work out.

For other members, the availability of virtual classes has inspired them to recommit themselves to a workout routine, especially in an environment where they can be comfortable. Members are muted during workouts and can turn off their cameras, if they choose, though BAC encourages members to see one another during workouts.

“When you have 30 people on … and they can see you and you can see them, it doesn’t feel like you’re alone,” Amanda Freeland, BAC’s membership and nutrition director, said. “We’ve built a community where members feel like family, and we wanted to come up with a solution to keep people healthy.”

Time will tell when Bay Athletic Club will be open for business again. Michigan’s current stay-at-home order ends on April 13, but there are indications Whitmer may extend the order. Lawmakers on Tuesday extended the governor’s emergency declaration over the virus through the end of April.

Until they can reopen, Gray and her team will keep forging ahead, helping members stay active and healthy and providing a source of positivity and routine.

“It’s been wonderful,” Freeland said. “Our members are so grateful and so happy to be connected. We’ve had members reach out and say, ‘I’m working out more than I ever have, and it’s the best part of my day.'”

Courtesy Photo Amanda Freeland, membership and nutrition director at the Bay Athletic Club, snaps a selfie while leading a virtual workout at the gym in this provided photo.

The free press must be protected