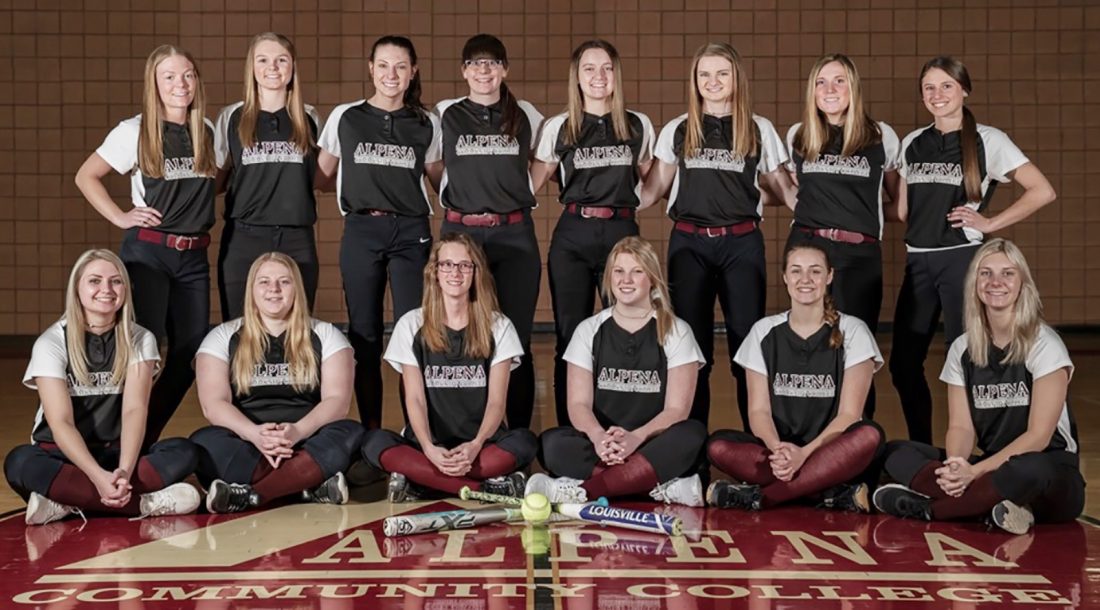 Courtesy Photo The Alpena Community College Softball team was one of the thousands of junior college teams around the nation to have its season cut short due to the coronavirus pandemic. The Lumberjacks were 4-6 before the rest of their season was called off. (Back row) L to R: Kali Spomer, Eve LaFleche, Calley Selke, Brooke Ciarkowski, Riley Alexander, Mollie Girard, Kayla Metty, Linnea Hentkowski. (Front row) L to R: Madyson Girard, Brittany Buczkowski, Lilly Lewis, Cathryn Hart, Alexis Trombley and Alissa Bowden. Not pictured. Brooke Jones.

Alpena Community College head softball coach Christin Sobeck and her staff put in a lot of time during the offseason to prepare her Lumberjacks for the 2019-2020 season in hopes of they could take the next step as a program.

Once her team was set, the players put in even more work on and off the field, in and out of the classroom in order to be ready for a season they had high hopes for. The Lumberjacks were ready to take that next step after competing and working hard during the fall and winter months and were ready to begin turning the corner during their spring trip.

ACC began its season on March 8, and enjoyed a six day stretch of positive results in Clermont, Florida as the Lumberjacks went 4-6 during its spring trip and showed signs of being a competitive ball club.

ACC finished its trip with two consecutive wins and ended their final game of The Spring Games trip with a 9-3 win over Erie Community College.

Despite playing strong competition during The Spring Games event that features many of the top teams at the junior college, NAIA and NCAA levels, the Lumberjacks held their own with an acceptable 4-6 record.

The Lumberjacks happily walked off the field after that final victory in Florida knowing they could compete this year.

What the Lumberjacks did not know is that would be the final time this season they would walk off the field.

“Coach (Sobeck) sent out a conference call with the team notifying us of what was happeneing and how this would affect our season,” ACC sophomore Eve LaFleche said. “When I found out the news, I was heartbroken that a game I’ve played for over 10 years had come to an end so quickly, but I’m also very thankful that I was able to experience the college level of ball for two years along with a great group of teammates and coaches.”

The current coronavirus pandemic put a stop to all sports and for ACC, it was later announced that the remainder of the season had been canceled.

“You can’t help to have a heavy heart because of the cancellation of the season. These girls worked so hard, through fall ball and they made sacrifices with workouts and class, so it’s disappointing not to have a season, but we also understand the safety reasons behind all of this and that is what’s most important during this time,” Sobeck said. “We feel for all athletes. The eligibility is still there for some, but academically it’s not going to be an easy decision. There is so much that factors into a decision and we want what is best for our kids.”

Unfortunately for Sobeck, she did not have the chance to be there to watch her teams successful spring trip. Sobeck was unable to travel with the team to Clermont and missed the only 10 games her team played. Instead, assistant coaches Jason Barbeau, Blair Diamond, Mary Ellen Wozniak and Cassandra Shaw led the team during those 10 games and the group pulled together and played well as a team.

Eight Lumberjacks finished with a .300 batting average or high, while a trio of Lumberjacks batted over .400.

“I am proud of the team. To go to Clermont and play the level of competition we played and to do as well as we did speaks volumes to how hard the girls worked to be prepared,” Sobeck. “It’s an unfortunate ending, but this is not just athletics that is different for these student-athletes, it’s everything. I credit the professors and everyone at ACC for doing all they can and keeping an open mind as we’re all forced to deal with this.”