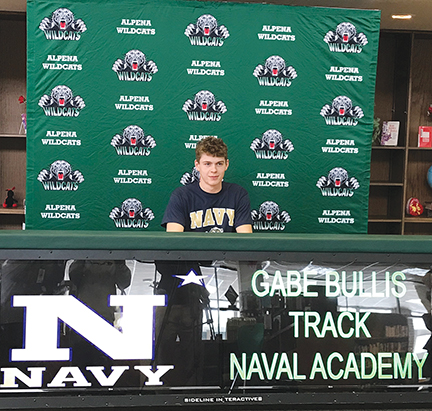 News Photo by Jonny Zawacki Alpena High senior Gabe Bullis announced his intention to attend the U.S. Naval Academy for pole vaulting on Thursday during Alpena’s Signing Day ceremony. Bullis, who won the Division 1 state title in pole vault, last season made his choice after narrowing down his list to Navy and Army.

After nearly a year of weighing his options, Gabe Bullis made his college choice official.

Bullis, who won the Division 1 state championship in pole vault last season, has been drawing the attention of colleges for the past few years, but narrowed his choices down to Army and Navy.

He made his final decision two days ago and will get the best of both worlds at the Annapolis, Maryland campus: a chance to serve in the military while continuing his athletic career.

“I’ve always wanted to join the military, I just didn’t know how that would work out,” Bullis said. “It’s just a lot to think about when you’re looking at these colleges because they’re both so equal, you just have to choose what you want to do after college.”

Bullis is the seventh Alpena athlete to sign a Division 1 letter of intent for track and field in the last two seasons. Eli Winter, who joined Bullis as a state champion last season (in discus), signed with the University of Michigan this school year and five Alpena athletes signed last year.

Since he began competing in pole vault five years ago, Bullis’ accession in the sport has been fast and remarkable.

He smashed Alpena’s vaulting previous record by nine inches as a sophomore with a vault of 15 feet. He achieved greater success last season, vaulting 15 feet, 3 inches at the Division 1 state finals to win a state championship. He also has two regional championships and two Big North Conference titles to his credit.

Bullis has had few, if any equals in pole vaulting the past two seasons–at least locally–and said one of the biggest challenges he expects to face at Navy is having to push himself against better competition.

Bullis finally got to make his choice known Thursday, wearing a zip-up sweatshirt to Alpena’s ceremony before unzipping it to reveal a navy shirt with Navy written in gold lettering with a Midshipmen logo underneath.

His college choice came after a seven-month application process that included rigorous medical testing, supervised workouts where he had to send his results to the academy and recommendations from teachers and coaches.

“This decision took me almost a year to make actually. West Point’s been contacting me for a little over a year and last year around Christmastime was my first contact with the Naval Academy,” Bullis said.

With his decision made, Bullis will turn his attention to ending his high school career on a record-setting note; namely the state pole vault record.

After winning a state title last year, Bullis has his sights set on clearing 17 feet, which would be a new record in Division 1. East Kentwood’s Trevor Stephenson set a new D-1 mark in 2018 of 16-feet, 9 1/2 inches.

Bullis said he has already cleared 16 feet and has been working with a coach downstate to have a chance at adding to his resume at the state finals in May.

“Honestly, I’m crazy excited for this. My goal by the end of the year is to break the state record (17 feet),” Bullis said. “It’s not an unattainable goal for me. I’ve already jumped 16-1 1/4 (in June) and that’s without having a coach in the past to help me through my pole vaulting drills.”