Tigers stave off challenge from Posen for key NSL win 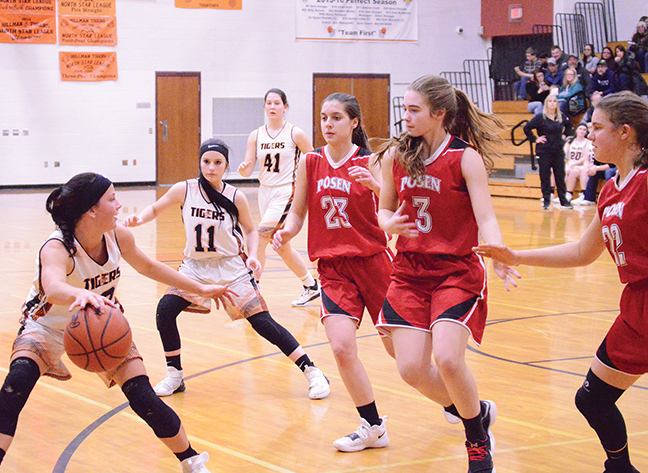 HILLMAN–Jenny Taratuta challenged her Hillman girls basketball team with a simple question on Thursday: How bad do you want this?

Playing in their biggest game of the season to this point, the Tigers’ answer to their coach was a resounding “We want it bad.”

Melanie Morrison canned a go-ahead jumper from the wing with 25 seconds left and the Tigers hung on for a hard-fought 49-47 win over Posen on Thursday in Hillman.

In a battle of the top two teams in the North Star League’s Little Dipper division, Hillman (12-4, 8-1 NSL) earned a regular season split with the Vikings (13-3, 8-1 NSL) after a late-game rally.

Hillman trailed by eight early in the third quarter and by seven with 1:32 left in that period.

But in the remaining 9:32 of the contest, Hillman outscored Posen 18-9, drawing fouls, making key shots and playing defense to stifle the Vikings’ hopes of wrapping up the division title on the road.

Posen’s chance for a game-winning three-pointer clanked off the backboard as time expired.

“At the beginning of the game I said, ‘It’s going to come down to who wants it more. Do we want to be the Little Dipper champs or do we want them to do it at your home court?,'” Taratuta said. “I said ‘Here it is. Show me now what you’ve got’ and they did awesome. We had great execution of plays. We did good at drawing fouls. We went to the basket, but we also knew when to slow it up. The girls did a great job of holding onto the ball and making sure they had control. They listened to everything I said tonight.”

Posen led 23-22 at halftime and kept the lead–save for one tie–until Bailey Schook scored with 1:58 left to make it 45-44, turning a bad Posen pass into an uncontested layup.

Riley Krajniak drilled a three-pointer with 1:14 left to put Posen up 47-46, but it was the last lead the Vikings held.

Morrison scored with 25 seconds left and was fouled with 11 seconds remaining, making one free throw to push Hillman’s lead to three. Hillman was quickly fouled again and after two misses, Posen had six seconds left to make a game-winner that eventually missed.

“It’s a real tough loss. What are you going to say? We didn’t make plays at the end, Hillman did and they won,” Posen coach Karl Momrik said. “We made some mental errors and you can’t leave it up to the basketball gods with a minute to go.”

Morrison finished with 12 points for Hillman, with 10 of those coming in the second half. Schook led Hillman with 19 points and Julia Taratuta had six.

In a game of sizable momentum swings, Hillman came out with something to prove and took the fight to Posen early. As the Vikings struggled to find a rhythm, Hillman raced out to a 13-6 lead.

Posen eventually regrouped and took control of the game, putting together a 14-0 run that eventually gave the Vikings a 20-13 lead in the second quarter as Hillman ran into foul trouble.

The Vikings were playing their third game in four nights and Momrik lamented his team’s inability to put the game away late.

“It’s very tough playing three games in four nights on the road and maybe it caught up to us at the end. I don’t know,” Momrik said. “We had advantages at times and we couldn’t hold on.”

Posen got off to a strong start in the third quarter, taking a 30-22 lead. But Hillman get pushing, made defensive adjustments and kept within striking distance offensively before making its move late in the period.

“Defense starts offense so we had to play smart team defense to make sure we had them stopped and we struggled at times,” Taratuta said. “Posen’s a good team and it’s a very good team to try and push us.”

Trailing 38-31, Morrison scored and then Schook converted on a three-point play to cut the lead to two. Just before the buzzer Schook was fouled and made both shots to knot the game at 38.

Ella Szatkowski led Posen with 12 points and Makayla Kamyszek had 11. 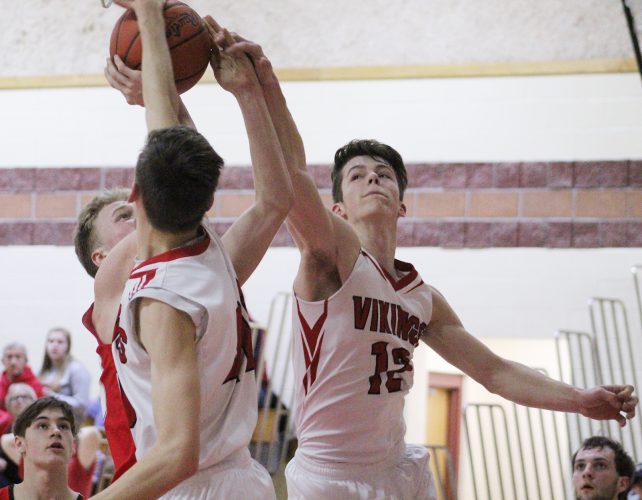 Life is a constant test to see how individuals react. Last Thursday, Swami arrived early for the girls games at ...