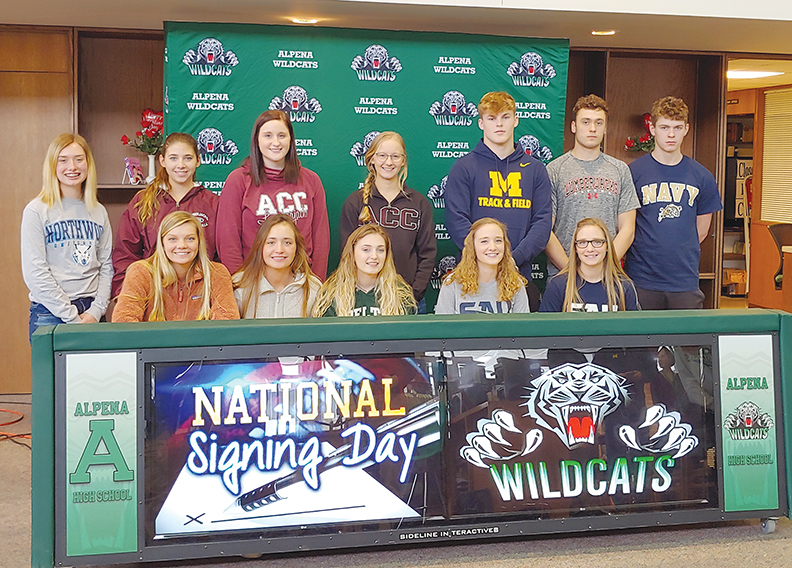 Alpena High School was forced to reschedule its original plans for National Signing Day on Wednesday due to illness among staff and students in the school.

Despite the wait, a dozen students were joined by family, friends, coaches and members of the school as the 12 Wildcat senior athletes announced their college plans on Thursday.

“The goal of the high school is allow kids to take the next step in their life journey and today is just a celebration of that. We have 12 athletes today, with a potential of more that get the jump in their next chapter into their great adventure,” Alpena High Principal Thomas Berriman said. “Some of them are going all over the state for various things and it’s just a tremendous honor for our building to have these type of kids represent us and for them to go into their next chapter to not only enjoy a continuation of a sport that many of them have done throughout their life, but to allow a sport to take them into the next chapter of education is something that is truly special for each athlete and their family.”

Nearly all of the athletes attending the special day were committed to a college or university upon entering Alpena media center. Bullis made his decision official just minutes before the event started as he committed to US Naval Academy where he will compete in track and field, continuing his education and attempting to perfect his craft in the pole vault. Bullis had a difficult decision as he had offers from both Navy and Army (West Point), but in the end, Bullis decided to join the Midshipmen.

Winter joined Bullis as a Division 1 track and field athlete as he announced he would be attending the University of Michigan and continue competing in field events, which include discus, hammer throw and weight throw while wearing the Maize and Blue.

“It’s awesome to see your kids going to the highest level with U-of-M and the Naval Academy, two Division I schools and it’s awesome opportunity and we’ve been able to watch these kids the last few years and this track and field program here at Alpena has really come a long way,” Alpena High School boys track and field coach Collin Riffert said. “Gabe and Eli definitely had the skills coming in, but the work ethic with them was huge and obviously they were great athletes, but being a great athlete isn’t enough all the time and honestly you wouldn’t find two kids that put in more time than these two do. So this is just a testament to their hard work and they went out and made it happen.”

The Alpena High softball program will also send off five athletes to the collegiate level.

The Funk sisters with both continue their softball careers at Spring Arbor University which is a National Association of Intercollegiate Athletics (NAIA) Division I school.

Cordes, Sheldon and Schultz will continue their softball careers at Alpena Community College.

“Five girls to be able to send off to play college softball is a great number. It makes our softball program really proud and it shows that the hard work and dedication that they have put in through the years has paid off,” Alpena High School softball coach Paul Marwede said. “For themselves individually, it’s a job well done and for their teammates and the program as a whole to have that many kids move on in one particular year is a real good feeling and we wish them nothing but the best.”

Stark will also be taking his talents to ACC as he’s committed to play for the Lumberjacks’ basketball team, completing the list of five Wildcats turning in their green and white for ACC’s burgundy and white.

Molly Dickinson will continue her cross country career at Division II Northwood University as part of the Great Lakes Intercollegiate Athletic Conference (GLIAC), continuing the impressive list of Wildcat cross country runners to have gone on to compete at the collegiate level in the past few years.

The final three athletes to announce were a trio of Alpena girls soccer players.

Kennedy Kaiser, Anna Young and Edie Zann will all continue their soccer careers at the junior college level when they attend Delta College in the fall.

“These are all a great group of kids. Alpena High School has a great group of kids and this is just a small segment of the senior class, but each one of these kids is not only a tremendous athlete, but student and person as well,” Berriman said. “The families should be extremely proud of what they’ve all accomplished as a student and as an athlete.”