ACC women unable to find rhythm in loss to Hawks 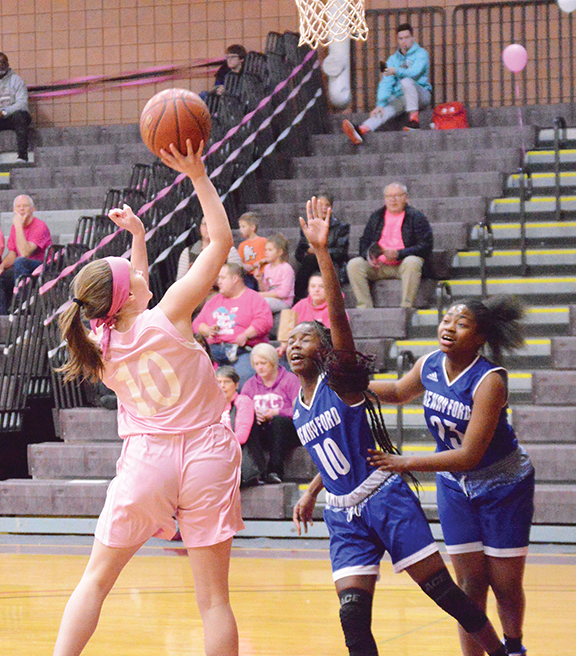 News Photo by James Andersen Alpena’s Lillian Black (10) shoots a jump shot while being defended by Henry Ford players Kiara McGowan (10) and Chol’ey Williams during the first half of a women’s basketball game at Park Arena in Alpena on Wednesday.

Good luck and fortunes have not been on the side of the Alpena Community College women’s basketball team this season.

Not only have the Lumberjacks suffered a handful of heartbreaking defeats, but injuries have started to doom Alpena and the lack of healthy players hurt the Lumberjacks in Wednesday’s 60-42 loss to Henry Ford.

Despite playing in their annual Hoops for Hope Pink Game, the Lumberjacks were unable to overcome the current lack of depth on their roster and foul trouble made life even more difficulty for the Lumberjacks.

Leading scorer and rebounder Dakota Prevo ran into foul trouble early and eventually fouled out of the game in the third quarter right after the Lumberjacks began to mount a comeback.

The shots wouldn’t fall early for Alpena and the Lumberjacks trailed 16-7 after one quarter.

Not much changed in the second quarter as Alpena found itself trailing 29-20 at the break.

The Lumberjacks found a new energy in the early minutes of the third quarter as they scored the first six points of the quarter to cut the lead to 29-26.

Prevo fouled out of the contest late in the third on a call that ACC coach Bobby Allen questioned and from there, Alpena seemed to lose a lot of momentum.

Despite trailing 47-29 after three quarters and looking all but done, Alpena scored nine unanswered points to begin the fourth quarter to cut the lead to nine, but it was as close as ACC would get on a night where the Lumberjacks were 0-for-17 from beyond the three point line and shot just 25% from the field and 50% at the free-throw line, Henry Ford was able to turn in a mediocre performance of its own and come away with a comfortable victory.

Freshman Lillian Black led Alpena with a team high 16 points and was the only Lumberjack in double figures. Abigail Larsen added eight points and Prevo finished with seven points in just 16 minutes.

Amber Davis led the Hawks and all scorers with a game high 21 points on the night. Chakayla Wilson added 15 points, Harper VandenBosch chipped in with 12 points and Kiara McGowan finished with 10 points as Henry Ford earned its first victory of the season.

The Lumberjacks will return to the court on Saturday when they travel to Mott Community College.