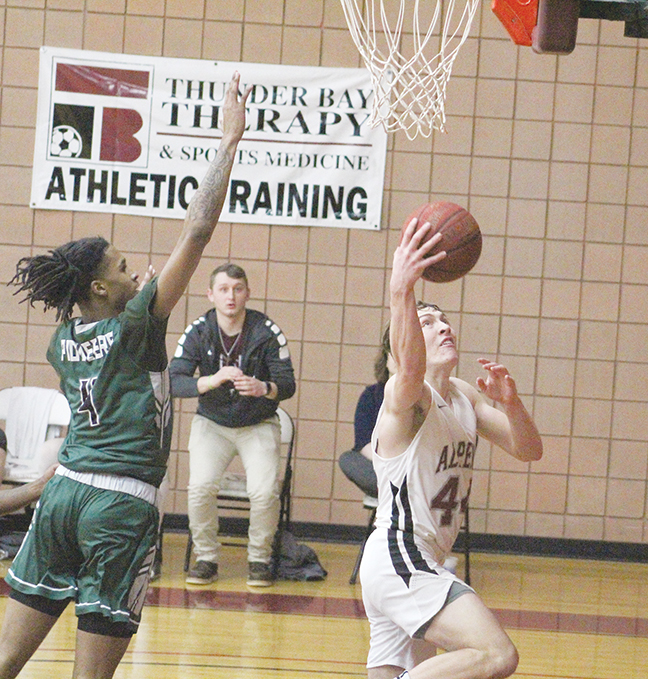 News Photo by Jonny Zawacki Alpena’s Isaac Hogsett (44) drives in for a layup while being defended by Delta’s Anthony Sanders during a men’s basketball game on Saturday at Park Arena.

After playing one of its best halves of basketball in more than five years, the Alpena Community College men’s basketball team surrendered a second half lead and missed a final desperation three at the buzzer to try and send the game to overtime, suffering a heartbreaking 70-67 loss to Delta Community College on Saturday at Park Arena.

The Lumberjacks opened the game red-hot, scoring the first nine points to begin the contest and built a 19-4 lead eight minutes into the game.

The Pioneers cut into the lead midway through the first half, but Alpena responded and continued to find ways to score. The Lumberjacks opened up the largest lead of the night, holding a comfortable 33-16 lead with six minutes left in the half.

Alpena held a 17-point lead, but Delta grabbed some much needed momentum, finishing the half on 10-2 run including Robert Mitchell beating the buzzer with a floater that went off the glass and in at the buzzer to trim Alpena’s lead to 39-30 at the break.

“We had a nice lead, we made a couple of mistakes and they chiseled a little, but it was good to be up at the half,” ACC coach Mark Jacobs said. “We had some mental mistakes at the end of the half because we could have been up more.”

The Pioneers opened the second half with six straight points to trim the lead to four and Delta took its first lead with 13:33 remaining after Mitchell buried a three.

Once again, ACC went into one of its lulls and fell behind 53-46 with 10 minutes to go. But the Lumberjacks battled back and refused let the game get away from them.

“We got down by seven and my guys came back. They showed me a lot of heart. I’m so disappointed for them, but at the same time I’m very proud of them,” Jacobs said. “I’m proud of their effort. It was a very physical game and a couple of free throws and completed passes, it could have been a different outcome. I’m proud of my guys, I know they’re frustrated, but we gave it our all and that’s all I can ask for.”

The Lumberjacks tied the game back up 62-62 with 2:51 to play when Garret Miller fought through a swarm of Delta defenders underneath the basket and put the ball up and in.

Alpena regained the lead with a 1:36 to play when Travis Woodward received a pass and scored a layup to put the Lumberjacks up 64-62.

Delta came back down the court and grabbed took the momentum back in a big way as Delvonte McCloud went baseline one-on-one with Woodward and put ACC’s big man on a poster with a vicious dunk to tie the game.

Woodward was assessed a technical foul, which proved to be costly as Aaron Collins sunk both technical free-throws to give the Pioneers a 66-64 lead.

Chris DeRocher was fouled going to the hoop, but missed a pair of free-throws with 57 seconds left, but Alpena’s Gunner Snyder corralled the missed free-throw to give the Lumberjacks another chance, but Logan Guenther missed a three that would have given Alpena the lead with 46 seconds left.

The Lumberjacks made a critical stop on defense and called a timeout.

With 20 seconds left, Alpena attempted to inbound the ball to Cleveland Baker, but Mitchell stepped in front of the pass and went down for an easy layup to give Delta a 68-64 lead.

Alpena raced back down the floor and found Baker in the corner he hit a three to cut the lead to one.

The Lumberjacks quickly fouled and Collins made both free-throws to put Delta ahead 70-67.

Alpena called its final timeout with 6.9 seconds to go.

The Lumberjacks advanced the ball up the floor and put it into the hands of Miller for a chance to send the game to overtime, but Miller missed wide on a difficult shot from beyond the arc at the buzzer.

“We wanted to get the ball into the hands of Garret or Cleveland and we were going to take whatever was open,” Jacobs said. “Unfortunately the inbound was stolen and credit to them (Delta) they’re a good defensive team. We played good ball. It’s a tough game and I hate to lose more than anybody in the world, but I did see some good things. It was very competitive and a game we should have won.”