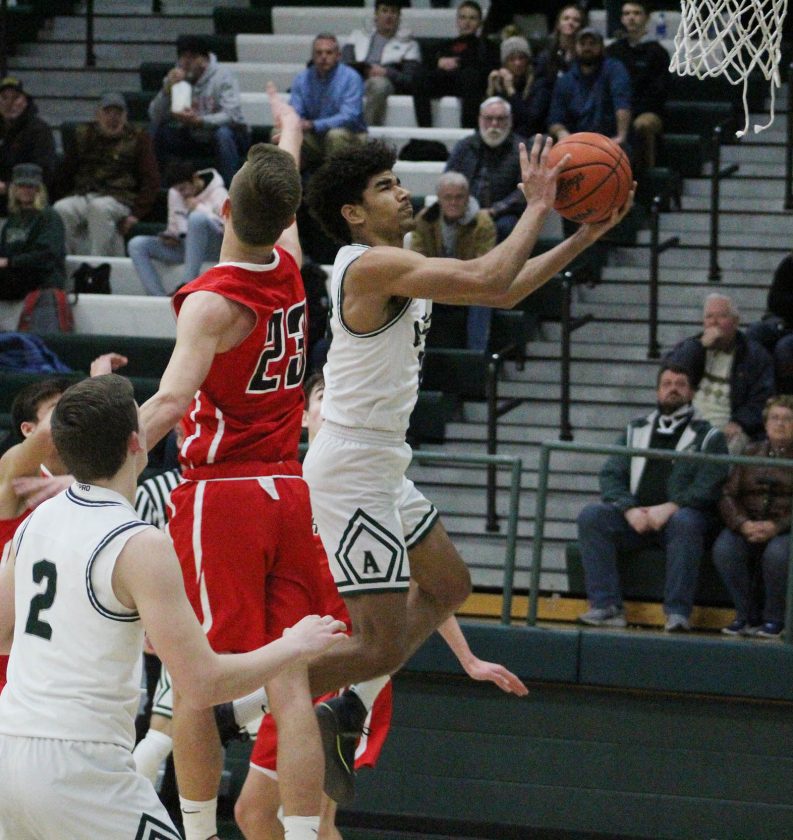 News Photo by Jonny Zawacki Alpena’s Jadon Duncan flies by Tawas defender Noah Davis and scores a basket during the first quarter of a boys basketball game on Tuesday at Alpena High School. The Wildcats blew out Tawas 74-23.

After suffering a pair of tough Big North Conference losses just over a week ago, the Alpena High boys basketball team has gained some much needed confidence and built some momentum in its last two non-conference games.

The Wildcats (7-4) defeated Bay City John Glenn last Thursday and took another big step forward on Tuesday as they took it to Tawas, beating the Braves (4-6) by a final score of 74-32.

“I thought our guys did a really good job defensively. To hold them (Tawas) to low 30’s in points was really important and I really thought our defense just led to a lot of opportunities where we able to get a lot of run-outs all game so it was really the defense that set the tone for everything,” Alpena coach John Pintar said. “The home game last week we had against Petoskey we had a great battle, but couldn’t pull it out and then we went down to Bay City and got a nice win on the road and to come back and follow it up with another good performance to build a little momentum is huge. We have a chance now to have a few home games so that’s huge and we can rest up after tonight and prepare for a big game Friday.”

The Wildcats got off to a fast start as they were efficient shooting the ball from all over the court, including from beyond the three point line as Alpena hit nine three point shots in the contest and were paced by Kelley Stark who poured in a game high 22 points and buried four triples on the night.

As good as the Wildcats were offensively, their defense was the key as turnovers and the ability to move the ball up and down the floor resulted in quick and easy baskets.

“I think our ability to shoot the ball at home has been important. We’ve been a really good team at home shooting the basketball and that’s going to continue being huge for us moving forward,” Pintar said. “I think our defense keeps getting there, but the step up in competition is going to be there and we have to continue to defend. On the offensive end, we have to be clean, take care of the basketball. Tonight we even got got a little sloppy and it didn’t hurt us, but against other teams that could be the difference in the game. We can’t afford to make those mistakes.”

After holding a 10 point first quarter lead, the Wildcats put together a big second quarter and closed out the half scoring 11 of the last 14 points and took a commanding 39-17 lead into the break.

Alpena didn’t let up and kept its foot on the gas as they continued playing strong defense and found ways to score.

All but one Wildcat cracked the scoring column and Alpena got a balanced scoring effort as Jack Schmanski finished with 13 points, Cooper Bright scored 11 points, Ryan Voltz added eight points and Adam Urlaub chipped in with seven points.

Tawas was led by Noah Davis who scored a team high 16 points in the losing effort.

Alpena will look to snap its three-game BNC losing streak on Friday when the Wildcats host rival Traverse City Central.

“I thought coming into the season, Central would be one of the top teams in the conference. They started off slow, but they definitely have their momentum going,” Pintar said. “When they walk in Friday night, you’re going to think they’re a college team because they’re huge, they have big, athletic, strong guys. They’re a really good basketball team, but I feel we’re a really good basketball team, especially at home. I think we’re going to have great energy and we look forward to having a big night and big crowd at home. It’s a rivalry game so that’s huge for us.”

The Alpena JV team also earned a win over Tawas, beating the Braves 44-33.