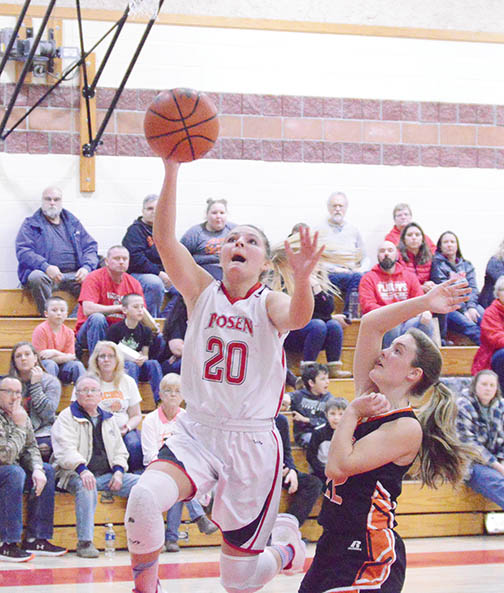 News Photo by James Andersen Posen’s Riley Krajniak (20) drives past Rogers City’s Grace Garrison during the first half of a girls basketball game on Monday in Posen.

POSEN–When the Posen girls basketball team executes its game plan on both ends of the floor, the Vikings are pretty hard to stop.

That proved true again on Monday as the Vikings used their full-court press to stifle Rogers City en route to a 54-26 win at Posen High School.

Makayla Kamyszek scored 13 points for the Vikings (9-2), who won for the seventh time in eight games and had every player on the roster score at least a point in Monday’s victory.

Posen led 20-11 after one quarter and flexed its defense muscle in the second quarter, outscoring the Hurons 13-4 for a 33-15 halftime lead.

“It was a good defensive performance. We packed it in on them and made it hard to get the ball inside. That’s a staple of our defense. We do a good job of fronting post players and keeping them out of the easy areas,” Posen coach Karl Momrik said. “When they play it (defense) right, we’re tough to stop.”

Rogers City (3-9) stayed with Posen early–the Hurons even briefly held the lead–but struggled against the Vikings’ press and missed a number of easy chances at the basket. Posen in turn created turnovers and outworked the Hurons on the glass for several second and third-chance buckets.

Riley Krajniak and Elena Kalbitzer added 12 points each for Posen.

“We did some good things in spots, but it wasn’t near enough to be consistent with it…We knew they were bigger than us and if we don’t put a body on them, what we thought could happen happened,” Rogers City coach Duane Pitts said. “We had an 11-point first quarter and then had eight points in the second quarter, that’s not going to get it done. We can’t have four points in eight minutes against teams like this.”

The Hurons cut Posen’s lead to 16 late in the third quarter, thanks to success from the arc, but struggled again in the fourth quarter and were held without a field goal over the final 9:14 of the contest.