Hillman remains undefeated in NSL with rout of Au Gres 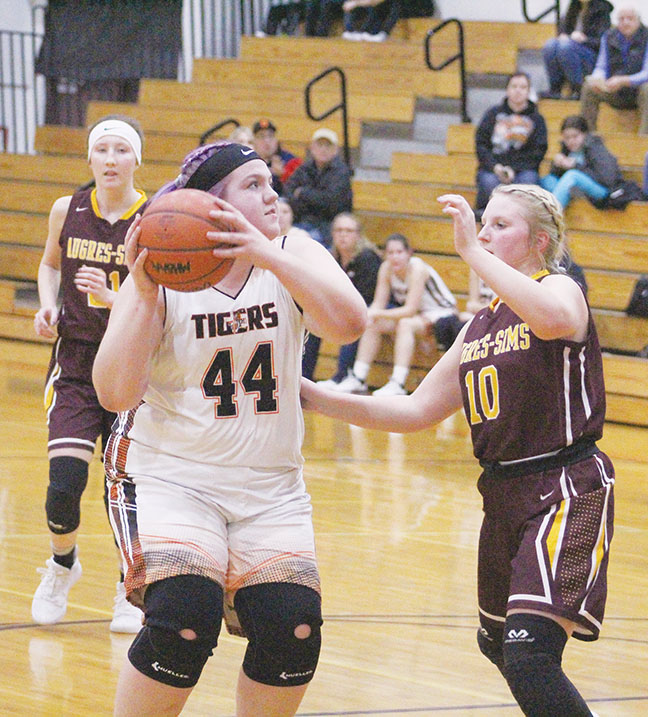 News Photo by Jonny Zawacki Hillman’s Allyson Brown (44) prepares to go up for a shot while being defended by Au Gres’ Kennedy Zeien (10) during the second quarter of a North Star League girls basketball game on Friday.

HILLMAN — After a frustrating loss earlier in the week, the Hillman girls basketball team was determined to get back on track Friday when the Tigers resumed North Star League play.

Hillman did just that as it made quick work of Au Gres, blowing out the Wolverines 56-14 at Hillman High School.

“Tonight was all about teamwork. There was a lot of good teamwork. I saw good passing, I saw looking ahead, looking for others who had opportunities to drive. All five were involved at all times no matter who was on the court and that’s what made us work,” Hillman coach Jenny Taratuta said.

The Tigers got off to a blazing start and were aggressive at both ends of the floor early.

Hillman’s press defense gave Au Gres fits in the opening quarter and all during the contest as the forced turnovers led to easy buckets for the Tigers. They jumped out to a commanding 18-1 lead after one quarter and they never looked back.

“We had a lot of good pressure and communication which was good to see, because we have struggled with communications lately and that’s something we’ve been trying to correct,” Taratuta said. “Moving forward, a win like this built up the confidence. We showed signs of improvement tonight after we got beat bad by Cedarville. Coming back and getting a win like this just gives us self confidence and shows us that we can do it and when we all work together and are on the same page, we can be successful.”

Hillman’s ball movement was on point and key to its success. Along with creating turnovers, the Tigers moved the ball all over the court and found ways to work their strength which is scoring on the inside. All but six of their total points in the contest came inside the three point line and a majority of those points came underneath the basket.

“Our ball movement was very good tonight and we kept looking to the inside instead of taking our one side, outside shot and being one and done,” Taratuta said. “That’s what we’ve been doing and we’re drying to get the girls to understand that inside is our game and we need to start looking inside. We all need to be a threat, we all to drive and tonight we executed that well.”

Hillman took a 23-point lead in the half and continued to build on its lead. The Tigers continued to find way to score in the third quarter as they took a 44-9 lead after three and were able to coast to a lopsided victory on their home floor.

The Tigers improve to 6-2 overall on the season and remain unbeaten in NSL play at 6-0.

Hillman will return to its home court on Monday when it hosts Rogers City.