ACC men suffer another frustrating defeat in loss to Macomb 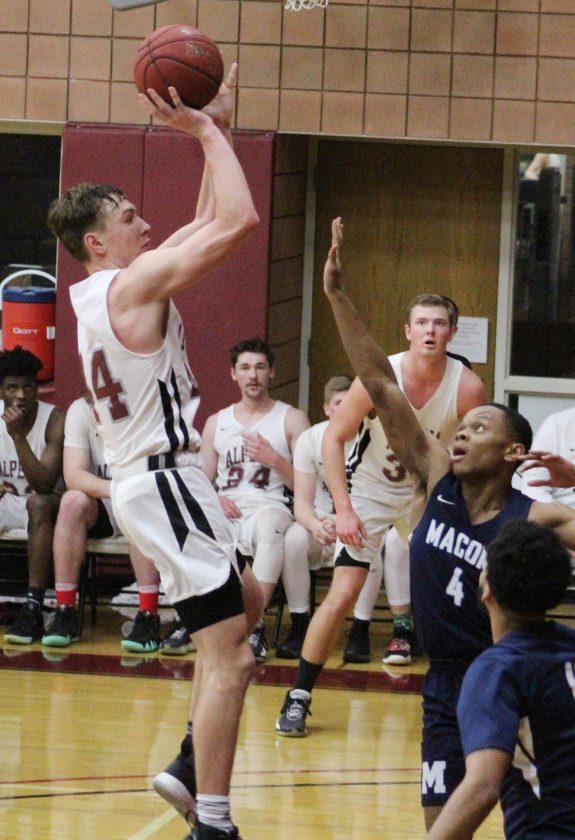 News Photo by Jonny Zawacki Alpena Community College sophomore Isaac Hogsett (44) makes a shot over Macomb defender Ron Hill (4) during the second half of a men’s basketball game on Wednesday at Park Arena.

Finding consistency has been the problem for the Alpena Community College men’s basketball team during what has been a frustrating season.

The Lumberjacks have been haunted by the inability to put a full 40 minutes together, suffering offensive lulls and being unable to shut teams down defensively.

The trends continued on Wednesday as the Lumberjacks suffered another costly lull midway through the first half that proved to be the difference as Alpena found itself playing catch up and was unable to dig themselves out of a hole and eventually fell to Macomb Community College 95-75 at Park Arena.

“For about 17 minutes of the second half it was the best basketball we played all year. We moved it around to the open guy and I was proud of that, but unfortunately we dug ourselves to big of a hole and we have to play like how we did in the second half, the entire game,” ACC coach Mark Jacobs said. “It is disappointing, but once again I did see some really good things. I saw some positive attitudes and saw some kids who are tired of losing and ready to put together all 40 minutes. I saw some hunger, the bench was loud and Macomb is a good team, they’re second in the league for a reason, but we just played one of our typical games where we went into one of our lulls which, unfortunately has been the case for us all season.”

The Lumberjacks opened the game going shot for shot with Macomb, but Alpena allowed 13 straight points as the Monarchs grabbed a 27-11 lead midway through the first half and built on the lead as they took a 55-29 lead at the break.

The final eight minutes of the first half proved to be costly for the Lumberjacks.

Despite falling behind, Alpena put together its best half of the year in the second and cut into the lead and got to within 15 midway through the second half, but couldn’t get enough stops or shots to fall as Macomb quickly grabbed momentum back and extended the lead, not allowing the Lumberjacks to pull off any kind of remarkable comeback.

Alpena’s Isaac Hogsett put together his best performance of the season, pouring in a team high 23 points, connecting on five threes in the contest. Hogsett also grabbed 10 rebounds to finish with a double-double. Logan Guenther added 17 points and Chris DeRocher chipped in with 14 points in the losing effort.

The Monarchs got much of their scoring from the duo of Djuan Seal and Justin Schultz who combined for 55 points as Seal scored a game high 28 points and Schultz finished with 27 points. Ron Hill ended the night with 17 points as the trio nearly match the Lumberjacks’ team total by themselves.

Alpena will return to the court Saturday when they travel to Wayne County Community College.