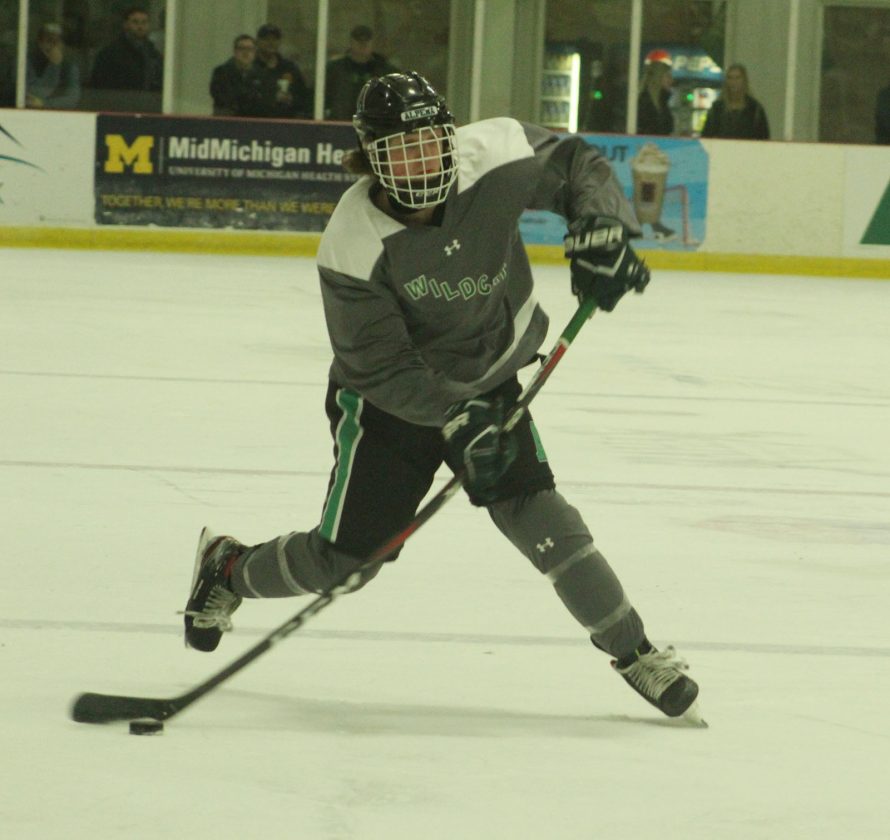 News Photo by Jonny Zawacki Alpena’s Matt Thompson unloads a slap shot during the first period of the Wildcats’ season opener on Friday against University Liggett in Alpena’s annual Fall Showcase at Northern Lights Arena. Alpena surrendered a late goal and fell to the Knights by a final score of 2-1.

At times in Friday’s season opener, the Alpena High hockey team showed flashes of a team that is going to once again be strong and competitive, but at other times, the Wildcats also showed their inexperience and it cost them in the final seconds as a late giveaway in their own end led to a University of Liggett goal with 15.9 seconds left as the Knights spoiled the season opener for Alpena at Northern Lights Arena, defeating the Wildcats 2-1 in the teams’ first game of the annual Alpena Fall Showcase.

“To me that’s just teaching at the end there. It doesn’t matter what sport, it just comes down to little things and you could see our inexperience out there today. We had a couple of chances late to get the puck out, but we weren’t willing or weren’t capable of getting it out,” Alpena coach Chris Limback said. “Everything that happened tonight are things that we went over and you could see the kids understand why we go over certain things. It’s a tough loss, but it’s a great learning experience. We’re going to have highs and lows the rest of the year and nights like this is where we have to learn and have to decide how good we want to be.”

One of the high points of night was the play of Alpena goaltender Jimmy Bolanowski who did all he could to keep the Wildcats in the game and came up with a number of big saves throughout the night, but the two goals he allowed were perfectly set up passes by a team that moved the puck around well.

The two teams entered the third period tied 1-1 after two evenly matched periods. The Wildcats were hit with a five minute misconduct penalty with eight minutes remaining and were forced to kill of a Liggett power play and that’s what they did thanks to a pair of tremendous saves from Bolanowski.

It appeared the Knights had scored the go ahead goal with once second left on the man advantage, but the goal was waved off due to goalie interference and the Wildcats killed off the penalty and seemed to have grabbed the momentum as they went on a power play of their own with 2:50 left to play.

Alpena was unable to create many chances, their best chance came late in the power play opportunity when freshman Anden Marceau fired a wrist shot just over top of Liggett goaltender Grant Lindsey.

The two teams were back to even strength for the final 50 seconds and it was the Knights who made the late surge and the Wildcats were unable to clear the puck out of their own zone and Liggett cashed in as Rocco Scarfone found the back of the net on a perfectly executed one-timer off of passes from Will Nicholson and Doug Wood to score the game-winning goal.

“With seven freshman on the team, they’re going up against kids that are three and four years older than them and I can’t imagine how it was for them with the pace of the game. The pace of play is so much different than what they’ve gone through and our other guys have nerves and other stuff going on,” Limback said. “You could see they (Liggett) played a game before and they had some skill. They made some great passes and that last goal was a great pass that led to a great goal and that’s just hockey and that’s what our team did last year with our older kids and that’s what experience will bring to a team.”

After a scoreless first period, Alpena opened the scoring with 5:29 left in the second period as Marceau scored a beauty for his first varsity goal as he put the Wildcats ahead with a great individual effort, collecting his own rebound and scored a shorthanded goal.

Just over two minutes later, Liggett cashed in on a power play opportunity after the Wildcats had killed off a 5-on-3. The Knights tied the game on a goal from Alec Leonard on assists from Nicholson and Wood as it was another well executed pass that led to another one-timer that Bolanowski had little chance at.

“I thought we all just grew as a team tonight. We have to stay out of the box and that’s just simple hockey. I thought we were selfish at times and those are things we have to eliminate. We have to come together as a team and eliminate the selfish stuff,” Limback said. “Tomorrow will be another great test for us. Saturday games are tough because you normally don’t have as big of a crowd and we have to just keep building and see where we’re at after the game tomorrow.”

The Wildcats take on Macomb today at 1 p.m.