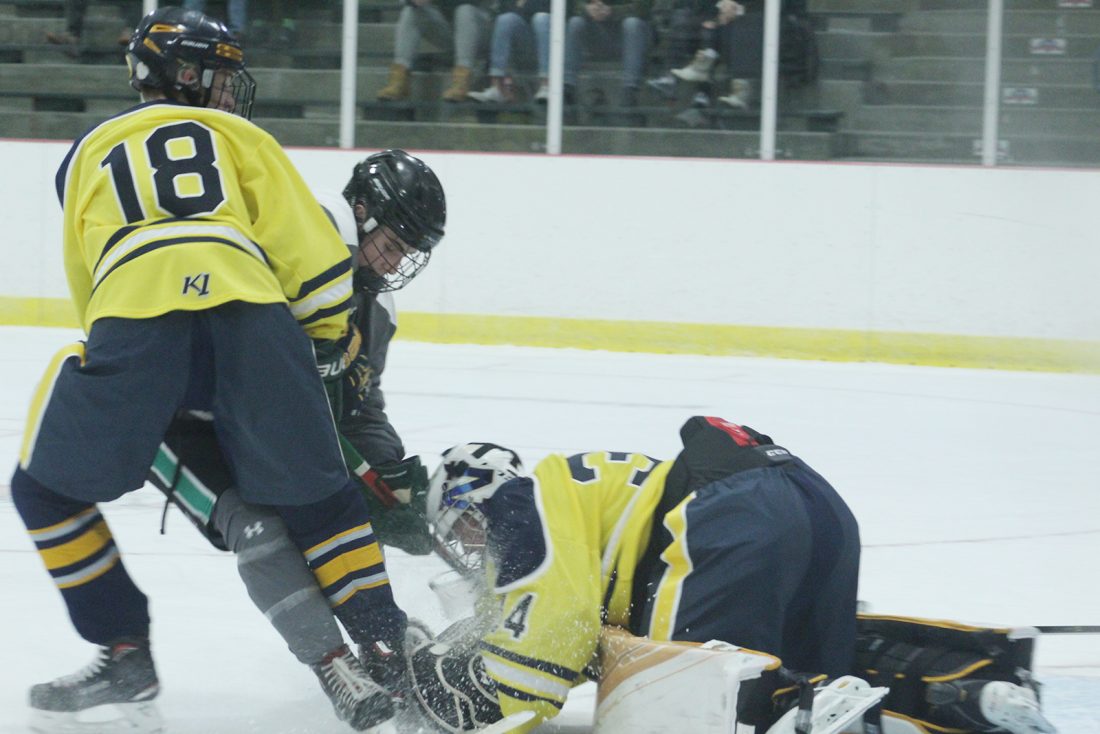 News Photo by Jonny Zawacki Alpena’s Anden Marceau tries to shovel in a rebound past Negaunee goaltender Ryan Kerkala (34) while being draped by defenseman Simon Lystila (18) during the first period of a hockey game on Friday at Northern Lights Arena.

Goaltending can often be the difference between winning and losing.

Unfortunately for the Alpena High hockey team, it ran into a hot net minder on Friday in the opener of their home Thanksgiving Classic at Northern Lights arena.

“We keep seeing little things that we’re doing better. We still have some areas that we need to improve on. It’s a tough loss, but we really have to work and put in the time to get a win,” Alpena coach Chris Limback said.

Trailing 2-1 late in the third period, the Wildcats pulled starting goalie Jimmy Bolanowski with 1:19 remaining and Limback called a timeout to allow his team time to refresh for on last rush to try and tie the game.

Up to that point, Alpena had controlled much of the game despite a short stretch early in the opening period.

With under a minute left, Alpena fired a puck on net that caused a mad scramble out in front of the Negaunee net and the Wildcats had several chances and it looked as if Alpena was going to find the back of the net and tie the game, but Kerkala made a pair of big saves and the Wildcats were unable to get a clean shot off and the puck was deflected out to Jack Mattias who sent the puck the length of the ice into Alpena’s goal to give the Miners a 3-1 lead and ice the game with 35 seconds left.

“We panicked. When you’re young, instead of being on our forehand, we were on the backhand and other times we would try to make too many moves instead of just going in a straight line and that’s the frustrating part,” Limback said. “We just need to keep it simple and get the pucks on the net and at times we tried to get too cute.”

Despite being down a trio of key skaters, the Wildcats made improvements from a disappointing opening weekend.

Negaunee netted a pair of first period goals to take an early lead.

The Miners struck first when Riley Luokkala fired a shot from the blue line that made its way past Bolanowski and into the back of the net to open the scoring four and a half minutes into the contest.

Negaunee extended the led with seven minutes left in the first period when Mattias won a faceoff and got through the Alpena defense and snuck the puck past Bolanowski for the second goal.

Despite outshooting the Miners in the first period, Alpena found itself trailing, but the Wildcats picked up the intensity and put pressure of the Miners, but Kerkala was up for the challenge.

The lone Wildcats goal came with 4:21 left in the second period when Anden Marceau skated around a pair of Negaunee defenders and out in front in Kerkala to bury his second goal of the season and bring the Wildcats to within one.

“We tried to play some kids where we could tonight just to get us a win tonight. I thought some out guys played good, but we just need to get more kids going,” Limback said. “We still look slow and tired and that’s something we have to start in practice. The kids have to realize that you have to put more into it for us to have success.”

One of Alpena’s best chances came with 11 minutes left in the game when Blaise Keller intercepted a pass in the Negaunee end and walked in one on one with Kerkala, but the Negaunee goaltender was able to make a tremendous glove save to preserve Negaunee’s 2-1 lead.

Alpena had some positive moments, but hurt themselves by committing a handful of penalties throughout the contest and as dominant as the Wildcats were peppering Kerkala with shots, more damage may have been done if they wouldn’t have been shorthanded for lengthy periods of time.

“The amount of penalties we took and time we spent in the box are just part of the things we have to eliminate. It’s selfish and being in the penalty box never helps our chances to win. Right now we’re selfish because we take frustration penalties and we try to do things as individuals and sometimes that happens when you haven’t won a game,” Limback said. “We have to find a way to work with each other and make the lines better and just play the game.”

The Wildcats will return to the ice today when they play the consolation game at 11:30 a.m.