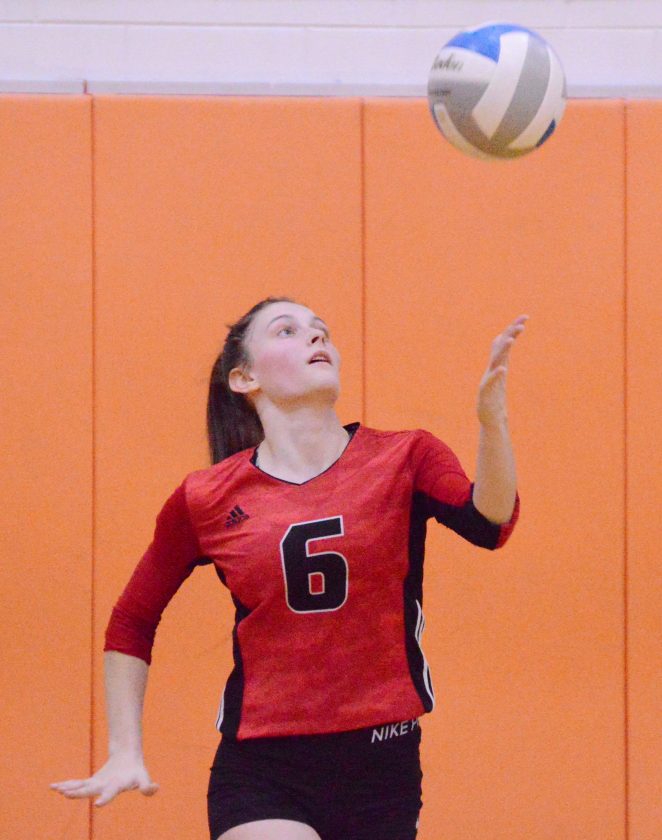 News File Photo Onaway’s Malaurie McLean serves a ball during a volleyball match during a district game in Hillman. The Cardinals take on Rudyard tonight at 6 p.m. in Cheboygan with a regional championship on the line.

The Onaway volleyball team has had a pretty good run of success in the regional tournament as of late, winning three regional titles in its past four regional finals.

The Cardinals are hoping to make it four championships in five regional finals tonight.

Onaway will face off against Rudyard tonight in a Class D regional final at Cheboygan High School. Game time is set for 6 p.m. and pits the two teams against one another in a rematch of last year’s regional final-a match Onaway won in five sets.

The winner of tonight’s contest will play either Carney-Nadeau or Painesdale-Jeffers in a quarterfinal next week. Onaway is looking to add another regional championship to its trophy case after winning titles in 2012, 2014 and 2018.

Both teams come in with impressive resumes as neither has yet dropped a set during postseason play. The tenth-ranked Bulldogs toppled Pickford on Tuesday to reach tonight’s regional final and Onaway swept Pellston earlier that same night.

If last season’s match is any indication, tonight’s match could go wire-to-wire too. Both teams have plenty of talent and are consistent enough to make bids for deep tournament runs. The two teams faced each other early in the season during a tournament.

For the Cardinals, tonight’s game plan will be similar to the one it had Tuesday against Pellston: play well defensively and limit Rudyard’s attackers. That means stopping Nina Alpers, Tristin Smith and Brooklyn Besterman, who are all strong front row players. It also means stopping Sara Beelen, a talented all-around player who can hurt opponents from the front row as well as the service line.

On the other side, Onaway hopes to counter Rudyard’s talent with its own. Star junior Breya Domke had a strong game against Pellston, but several other Onaway players had big nights and came up with the right plays at the right time to keep Onaway going.

Cloe Ehrke had six aces in Tuesday’s match, including five in a row in the first set, helping Onaway take Pellston’s off its game early. Malaurie McLean had five kills against the Hornets, but also scored several points for Onaway on tips, putting the ball just out of reach of Pellston defenders. Jackie Sellke and Mallorie Neelis made heads-up plays as well with Neelis’ passing and Sellke’s net play scoring the Cardinals several crucial points down the stretch. Onaway will also be looking for another strong night from the service line, after serving 23 aces on Tuesday.

If recent history is any indication, tonight’s match may well be Onaway’s toughest of the season. Onaway coach Steve Watson has been stressing to his team the importance of staying in the moment, but also realizing how important each set is within a match this time of year. Last year’s Onaway squad did just that in the regional final, rallying from an early deficit in the fifth set to win a match Watson later called “the best game I have ever been a part of as a coach.”

Perhaps most importantly, Onaway is trying to extend its season as far as it can go and earn its third quarterfinal appearance since 2014.

“Everybody comes to win and you’ve got to go out (and) show up,” Watson said after Tuesday’s win. “A lot of teams can win a district; it’s what can you do after that.”