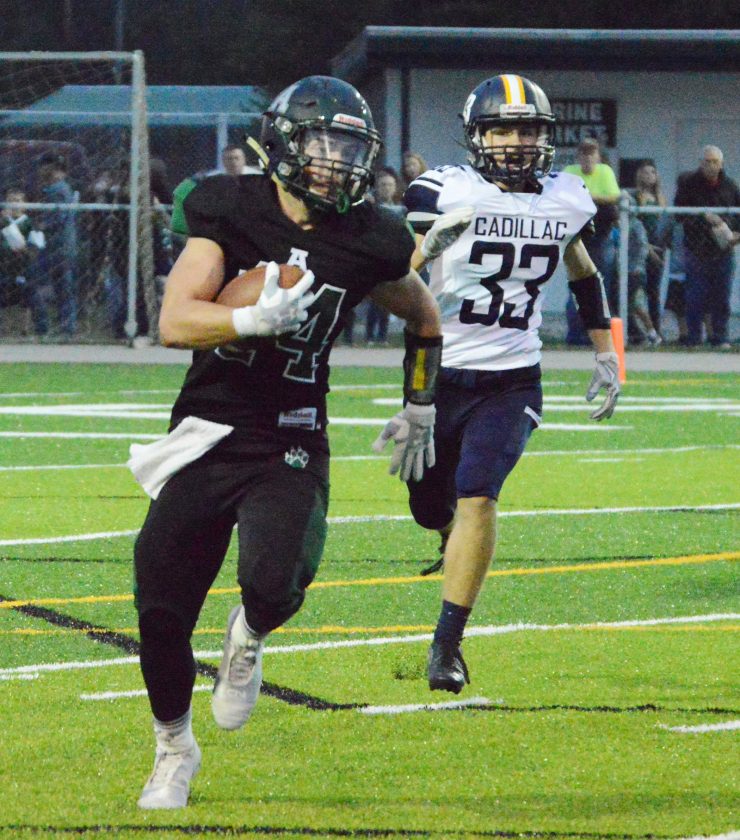 News File Photo Alpena’s Charlie Williams (14) outruns a Cadillac defender during a Big North Conference football game at Park Family Field at Wildcat Stadium in Week 4. The Wildcats travel to Marquette tonight for a matchup with the Redmen at 7 p.m.

After winning two consecutive games, the Alpena High football team took a few steps backward in last weeks 37-6 loss at Traverse City West. The Wildcats made costly mistakes early, fell behind and could never dig themselves out of the hole they that they fell in.

This week Alpena will once again focus on the little things and try to correct some of the errors that hurt them a week ago.

The Wildcats have had a long week of practice to make corrections and will also have a long bus ride to think about what they need to do in order to come away with a needed victory.

Alpena travels to Marquette today and will take on the Redmen. Tonight’s matchup will be the first meeting between the two schools in nearly two decades as the last game between the two programs was back in 2000.

Despite the long layoff of playing the Redmen, Alpena knows what Marquette is capable of and the Wildcats hope that the long trip back will be an enjoyable one after a win as Alpena looks to get back on track.

“Marquette is pretty good. They have some speed, they have some size and they have a quarterback that can throw and can run. That’s our number one concern is making sure we maintain a quarterback that is a true dual threat athlete. We have not really seen one yet this year so it’ll be a new challenge for us,” Alpena coach Eric Mitchell said. “We know that this is a well coached program that has been successful in the past and I think that they think it’s the year they have what it takes to make a run. For us, we’re coming off of tough loss, they’re coming off a tough loss, it’s their homecoming so they have distractions, like we will next week and we have a long road trip. Both teams have distractions that we have to block out and I think whatever team comes out and plays better fundamental football is going to be the one that wins. Last week we got caught in quicksand and we have to understand if it happens again, we have to play through it.”

Marquette (2-3) has been tested through the first five games of the season. The Redmen dropped their first two games to Traverse City St. Francis and Traverse City Central in competitive games. Like the Wildcats, Marquette then won its next two games, defeating Sault Ste. Marie and Escanaba, two teams that Alpena was defeated by to begin the season.

Marquette will continue to rely on the play of sophomore quarterback Austin Ridl who Mitchell and the Wildcats are aware of can create a lot of plays in several different ways.

“We try not to look ahead, but we looked at our (playoff) points the other day and we know we can get in with a 5-4 record. We control our own destiny. We feel we have to get this game, we know we have Central coming up and they’re ranked, it’s our homecoming, there’s a lot of things, we just have to go out and play football. We can beat Central, but we need to be focused on this week and beating Marquette. Our goal right now is not just to have a winning season, but to make it to Week 10,” Mitchell said. “With Marquette not being a BNC opponent, I don;t think it changes our mind set at all. Winning the conference is something we know we can do, but this week is about can we manage all of the little things.”

It is important for the Wildcats to remained focus on this week despite how easy it would be for them to look ahead to next weeks homecoming game and a chance to remain near the top of the BNC.

Alpena understands that the margin of error is becoming less and less if it wants to achieve their goals of making the postseason. A loss tonight would drop the Wildcats to 2-4 and force Alpena to win out.

“The beauty is that Central runs a similar offense to Marquette so in a way, we’re focusing on Central without playing them. We play two spread teams in a row so luckily for us we can really try to see what’s working for us on defense,” Mitchell said. “We’ll make adjustments throughout and find ways to shut guys down and come away with a win.”