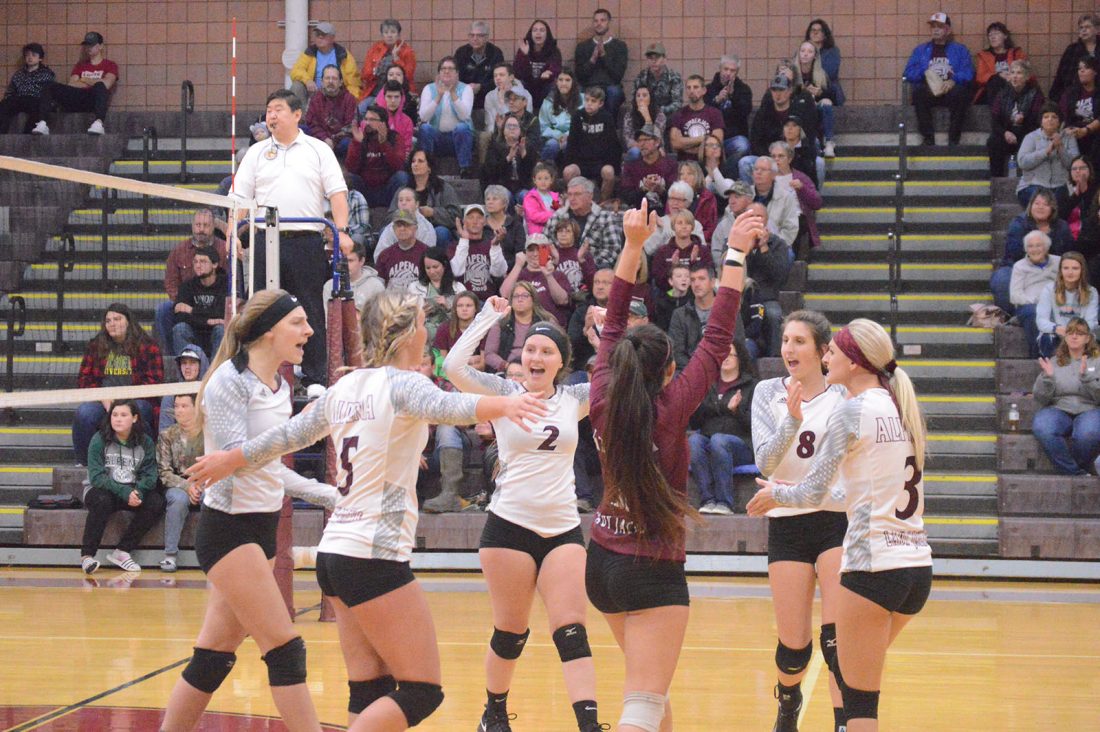 The Alpena Community College volleyball team was caught between swings in momentum on Saturday.

The Lumberjacks played well in spurts, but when they lost momentum it proved costly and ultimately resulted in a pair of conference losses to St. Clair at Park Arena.

After a solid outing at home against Mott on Monday, ACC played well again on Saturday, but struggled all day with serve receive and trying to slow down a quick-striking St. Clair offense. It seemed for every point ACC scored, the Skippers responded with three or four to pull away.

“I really think that we played better, but we’re still having some issues. We need to pass a little bit better. They’re a quick setting team, so it was a little (bit of a) struggle for us to get a block on it,” ACC coach Sarah Parsons said. “We played well as a team, but we still need to get things put together better.”

The Lumberjacks pulled ahead 7-2 early in the final set of the first match after St. Clair had trouble landing attacks coupled with strong play at the net from freshman Jessica Leeck. ACC upped its lead to six before momentum swung the other way and the Skippers rallied to tie the set.

St Clair ultimately used a 9-1 run to take control of the match as ACC struggled with its serve receive. The Lumberjacks had several impressive volleys with the Skippers, but several of ACC’s attacks landed out of bounds, allowing St. Clair to keep possession of the ball.

“We’re going to work on that (serve receive) all next week before we play Macomb,” Parsons said. “Serve receive has always been a struggle for us, even in past years; it seems like we can’t pass the ball up and that’s what starts the play. We’ve got to be able to pass the ball.”

ACC showed some resiliency in the second set of the second match, rallying back early after falling behind 8-4. Aggressive play at the net and some miscues by the Skippers allowed ACC to tie it 8-8. The Lumberjacks kept things close until late when the Skippers caught fire on offense. Holding a 18-16 lead, St. Clair ended on a 7-0 run, that included an ace, a tip and a kill.

The Lumberjacks started strong again in the day’s final set, leading 4-1 early, before succumbing to serve receive issues. Out of a 7-7 tie, St. Clair outscored ACC 18-8 the rest of the way.

ACC plays at Macomb on Saturday.