It’s all falling into place 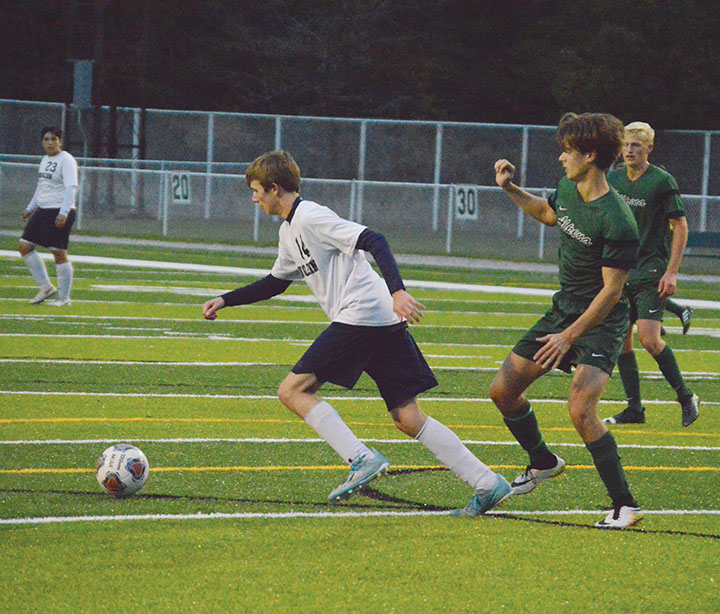 News Photo by James Andersen Alpena’s Ivo Arvidsson-Ullberg, right, battles Bay City John Glenn’s Logan Duty for control of the ball during the first half of a Division 2 district semifinal on Tuesday at Park Family Field at Wildcat Stadium. Alpena won 7-0 and Arvidsson-Ullberg was one of three Alpena players to score twice.

Everything fell perfectly into place for the Alpena High boys soccer team on Tuesday.

A new team record for wins?

Another win to keep its season alive?

Ivo Arvidsson-Ullberg, Kyle Barbeau and Kolton Goebel each scored twice and the Wildcats dominated Bay City John Glenn on the way to a 7-0 victory in a Division 2 district semifinal at Park Family Field at Wildcat Stadium.

Austin Townsend added a single tally for the Wildcats (17-4-2), who set a new program record for wins in a season with Tuesday’s victory and advance to a district final against Gaylord at 5 p.m. Saturday in Gaylord.

The Wildcats beat John Glenn with a 1-0 win in August, despite outshooting the Bobcats by a wide margin. Alpena left no doubt who the better team was Tuesday, scoring seven goals on twelve shots and building a 3-0 lead by halftime.

“I couldn’t be more proud of these guys and their accomplishments, their work ethic and their focus. We talked about what we had to do to beat this team,” Alpena coach Tim Storch said. “We really talked at length and trained at length to beat their bunker defense and play wide and open up the field and make people more dangerous. To get seven goals on 12 shots, I’m very, very pleased with our efficiency and that’s what you need in the state tournament.”

Arvidsson-Ullberg had a record-breaking game in the midst of Alpena’s big night as a team. His two goals set a new program record for goals in a season with 27, breaking the previous mark of 26 set by Gabe Miller in 1992. He also broke Alpena’s single-season assists record, which was set in 2016 with 16.

Arvidsson-Ullberg’s first goal gave Alpena a 3-0 lead late in the first half. He found some space and fired an easy shot past John Glenn keeper Brendan Brill for the goal. His record-setting goal came with 28:23 left in the game as he settled the ball, faked a move on Brill and fired a shot into an open net, giving Alpena a 6-0 lead.

His abilities as a passer proved helpful as well, particularly on a pair of second-half goals. With 31:18 left in the game, Arvidsson-Ullberg fired a corner kick at the net, which Goebel redirected with a header for his second goal of the game. Then with exactly 29 minutes left, Arvidsson-Ullberg found the perfect window to feed a pass to Barbeau and Barbeau buried the chance for his second goal of the game, upping Alpena’s lead to five.

Storch praised the efforts of his seniors, noting that Tuesday’s win felt like another Senior Night.

“This was the last time these 10 seniors were going to play a home game on this field, no matter what we did. It was up to them whether they want to go off the field as winners or losers,” Storch said. “I’m really proud of their focus and they played their final game on Park Family Field as seniors should. They won going away and we’re in position where we can win a district championship.”

Townsend completed Alpena’s scoring for the night, connecting with 5:37 left with Brill out of position. Townsend’s goal gave Alpena seven goals on 12 shots–a 58% success rate–and the Wildcats outshot the Bobcats 12-1 for the game.

John Glenn entered Tuesday’s contest hoping to force Alpena to play wide, but the Wildcats quickly took the Bobcats out of their system as Barbeau got a shot off within the first 30 seconds. He connected successfully with 32:08 left in the first half, appearing to score on a scissor kick.

After a few near misses, Goebel gave Alpena a 2-0 lead with 10:25 left, scoring on another header.

With two postseason wins in hand, the Wildcats are hoping to make it 3-for-3 on Saturday, when they play Gaylord. The Blue Devils have already beaten the Wildcats twice this season in a pair of closely contested games. A win would give the Wildcats their first district championship since 1997 and just their third in program history.

“Certainly we had two great games with them,” Storch said. “Hopefully, the third time is the charm for us. They come in as the No. 1 seed, we’re the No. 2 seed so it’s kind of the way the MHSAA drew it up. I’m happy the seeding system is successful and we’re going to get a third shot at them.”