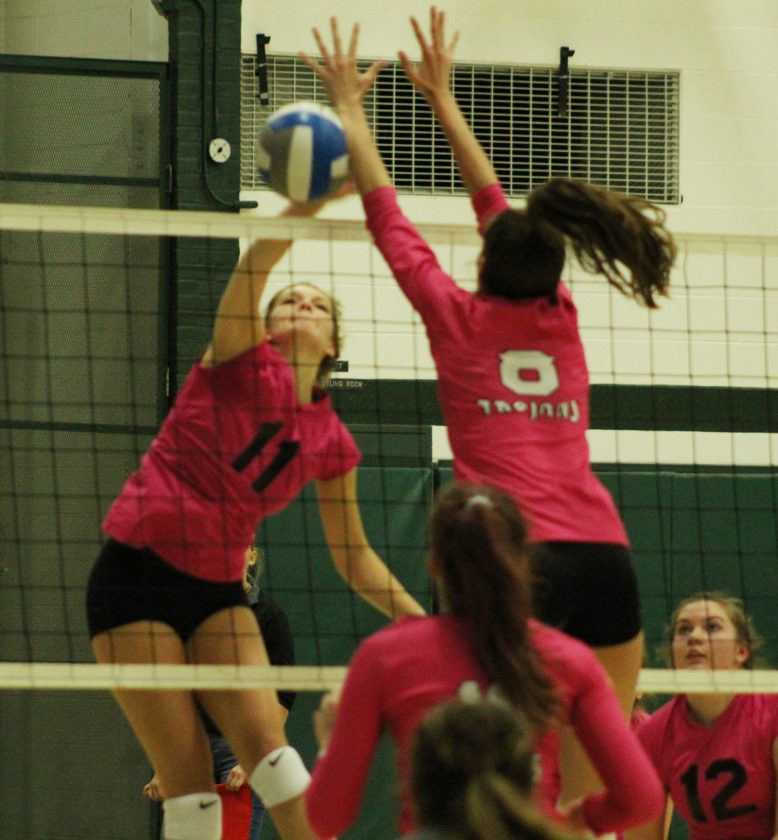 As if Alpena High School wasn’t filled with enough emotion on Thursday night as the Wildcat volleyball team played host to their annual Pink Game, welcoming BNC foe Traverse City Central and the two rivals provided even more emotion and excited throughout the night, but in the end Alpena was on the short end of a five set defeat, falling to the Trojans 19-25, 25-21, 25-23, 19-25 and 7-15.

Despite how the night began, Thursday’s matchup proved to be much different than the previous meeting between the two conference foes. Central swept the Wildcats in Traverse City earlier this season and tonight, Alpena had its opponents on the ropes, but failed to deliver the knockout punch.

However, the Wildcats did show just how much they have grown as a team since the beginning of the season.

“We did make a lot of improvements. This time we made a lot of changes with our offenses and mixed them up a lot and ran some quicks outside, had people crashing the net and doing a good job of that,” Alpena coach Melissa Doubek said. “It was much improved, but still a little disappointed because I thought we could have pulled that last set off, but we kind of fell apart at the end. Otherwise it was much better than the first time we played them (Central).”

Early on it looked like it was going to be a quick night for the home team as Central controlled the nets thanks to their height up front led by Emma Turnquist, Sarah Auger and Maggie McCrary as the trio attacked the net all night and helped the Trojans take a commanding lead in the first set as Central scored the first 11 points to open the match and held on to win, despite a late rally from the Wildcats led by some strong serving from Meghan Roznowski who served six straight points to cut a nine point deficit to four, but it was as close as Alpena could get as the Trojans took the opening set.

The Wildcats quickly made adjustments and figured out a gameplan to slow down the Central attackers as Alpena’s front line of Edie Zann, Allie DeRocher and Emma Dockrill began crashing the net, blocking would-be kills and making life difficult for the Trojans. Zann paced the Wildcats with 16 kills, Dockrill added 13 kills and DeRocher finished with six kills of her own.

Alpena gained control of the second set when Kate Skiba continued to display her ability to serve up points as she led the Wildcats on a 7-0 run midway through the set to give Alpena a 12-7 lead. Skiba finished the night with eight aces and six kills.

Both teams were tied a 20 late, but the Wildcats scored five of the last six to tie the match at a game apiece.

“We are pretty resilient. That is something that we have worked on since the beginning of the year. Every point is a new point and our goal was just to start getting momentum by the end of the first set and I knew we could pull something else out if we could get momentum in our favor,” Doubek said. “The kids started thinking a little bit more as far as their defense, their offense and we made the adjustments. Central had some tall attackers and they ran quick offenses, but I thought we did a good job adjusting to the quicker hits and they began to get frustrated with all of our blocking and they started tipping on us and we had to adjust to that too. Both teams were working hard tonight and we just fell a little short.”

Both teams played neck and neck in a critical third set as the teams were tied on eight different occasions throughout the set, but it was Alpena coming up big when it was needed and the Wildcats took a 2-1 lead in the match and grabbed the momentum, while gaining confidence.

The momentum was quickly shifted in the fourth set as Central once again got out a big lead early and used a 7-0 run midway through the set to take a 16-7 lead and eventually tied the match up, sending the contest to a fifth and final set.

In the fifth set, it just looked as if the Wildcats had ran out of gas as Central scored 13 of the first 16 points to take a commanding lead and coasted to a fifth set win and walked away victorious in a thrilling BNC match.

“The girls should see that they have resilience to fight through persevere. To be able to fall behind and pick yourself up and bounce back shows a lot about our team and where we’re at right now,” Doubek said. “Once again, I think tonight just goes to show that we know that we can play with anyone.”