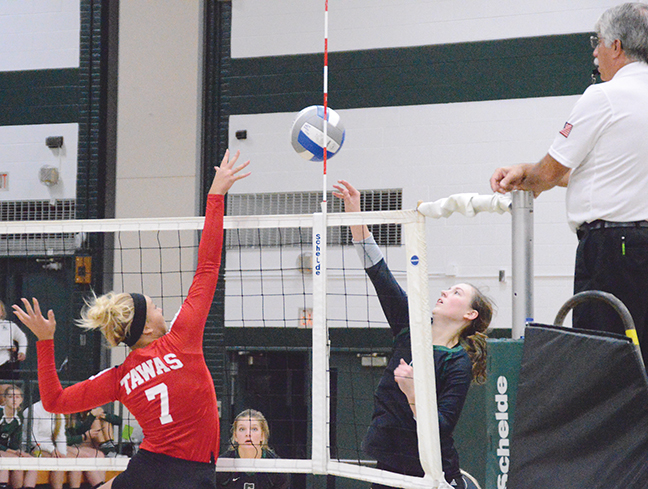 News Photo by James Andersen Alpena outside hitter Kate Skiba, right, attempts to hit a ball past a Tawas defender during a match on Monday at Alpena High School. Skiba’s strong serving night—10 aces in the first two sets—provided the Wildcats with a boost on the way to a sweep of the Braves.

The junior outside hitter showed off her serving skills, dishing up 10 aces in the first two sets to help the Wildcats sweep Tawas at Alpena High School.

Alpena defeated the Braves 25-8, 25-16 and 25-20 during an up-and-down contest. The Wildcats got the sweep, but the scores–especially the final set–were a little closer than Alpena coach Melissa Doubek would have liked.

“Kate Skiba served very well tonight for us and kept us on top, but otherwise (we didn’t have) the offensive attacks we’ve been seeing over the last couple weeks,” Doubek said. “I was a little disappointed. Our intention was to come out and work on some of the different strong offenses and I didn’t see those tonight.”

Skiba added 10 digs and three kills and Edie Zann had 11 kills and three aces for Alpena, which used extended runs in the first two sets to win and then found some offense late in the third set to pull off the sweep against a Tawas’ squad that held its own in the final two sets.

Clinging to an 11-7 lead early in the first set, Skiba went to work at the service line. She served a pair of aces to push the lead to 13-7 and added two more, back-to-back, a short time later. In all, the Wildcats went on a 14-0 run and Skiba had seven aces, stretching the lead to 24-7.

“It’s helpful when you’ve got that strong server that can throw another team out of system,” Doubek said. “We aren’t going to get the attacks coming back at us. She’s been serving very well the last couple weeks and I think she’ll keep that up into Thursday night.”

The Wildcats used another run to pull ahead late in the second set. A tipped ball gave Alpena a 17-15 lead and the Wildcats went on a 9-1 run to end the match.

Doubek said her team was likely a little rusty from being off for a few days and said the Wildcats will need to improve before they host Traverse City Central on Thursday.

“It’s a non-conference and it’s a Monday night. No one likes to play on a Monday night. It’s hard to come off the weekend and get the strong attacks,” Doubek said. “Central’s going to be tough. They’ve got some big middles and we’ve got to work hard to get around their blocking. The first time we saw them, we had poor serves and poor serve reception. Our serve reception has increased 100%, so I’m looking for a closer game this time.”

Tawas went toe-to-toe with the Wildcats in the final set and neither team led by more than three points until late. Alpena had a 9-1 run midway through the set to take a 14-11 lead, but the Wildcats struggled to find consistency on offense. The Wildcats had plenty of attacking opportunities, but had more than a few shots hit the net or end up out of bounds to give the Braves the ball back.

Alpena finally tipped the scales in its favor with a 5-0 stretch late, which gave the Wildcats a 21-15 lead. Zann had a block and kill during the run and Jade Gray had a kill.

Tawas took advantage of some attacking errors to keep things close, but Alpena ended the match after an attacking error and a block from Allie DeRocher gave the Wildcats the last two points they needed.

DeRocher finished the night with 10 kills and 10 digs and was a solid presence for the Wildcats all over the floor. Macy Dickinson added 26 assists and Emma Dockrill had six kills.