Wildcats ready for clash with Cadillac 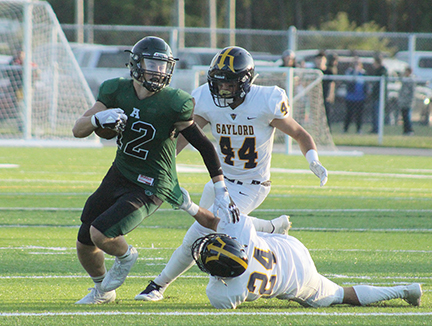 News File Photo Alpena’s Eli Winter (12) breaks past a pair of Gaylord defenders during a Big North Conference football game last Friday at Park Family Field at Wildcat Stadium. The Wildcats end a three game home stand tonight when they host Cadillac in a battle for a spot atop the BNC early in the season.

Tonight, two teams that were predicted to finish at the bottom of the Big North Conference will take a step closer to proving their doubters wrong.

Alpena (1-2, 1-0 BNC) and Cadillac (2-1, 1-0 BNC) were both picked to finish at the bottom of the conference when the Big North Conference preseason poll was released just prior to the 2019 season kicking off.

Alpena was predicted to finish last and Cadillac, a spot above the Wildcats.

The Vikings were victorious in their conference opener at home week ago when they defeated Petoskey 27-12.

Cadillac had its way on the ground against the Northmen as they piled up 359 yards rushing in the contest led by Noah Cochrane’s 183 yards and two scores on 21 carries.

The Vikings love to pound the rock and only had 12 yards passing in their Week 3 win. The Vikings are confident that their offensive line play can continue to create lanes for its skill players in Cochrane, Julian LaMonde, Aden Gruden and Tipp Baker.

Cadillac was opportunistic in its BNC opener. The Vikings were far from perfect as Petoskey amassed 348 yards of total offense, 215 of which came on the ground, but mistakes hurt the Northmen as drives stalled out deep in opponent territory and the Vikings were able to capitalize on those errors.

“Cadillac has played pretty well this year. They’ve had a couple of close games and the Petoskey game was close last week until it wasn’t. We know Petoskey made a couple mistakes and Cadillac kind of ran away with it. We know if we go out and play fundamental football, I don’t see any problem why we shouldn’t be able to handle this team,” Mitchell said. “We have to make sure we’re lined up correctly, everybody knows their gap, we’re playing a veer team and Cadillac has run the veer for three years now and they’re getting pretty good at it so we have to make sure we know our assignments on every single play and know our gap. If we do that and keep our pad level low, we should have good results. Last week we prepared for a four quarter fight, this one definitely will be. It’s going to be a meat grind, no doubt about it.”

The Wildcats are hoping for a repeat performance of last week as they turned in one of their best performances in recent memory as they dominated Gaylord 30-6.

Alpena controlled the line of scrimmage on both sides of the ball and offensively, the Wildcats had their way, rushing for over 300 yards. Jordan Schultz led the Alpena ground attack with 131 yards and scored a pair of touchdowns, Eli Winter added 113 yards and Charlie Williams finished with 61 yards and a score.

Quarterback Ryan Voltz connected with receiver Kelley Stark in the final seconds of the first half on a perfectly executed pass and catch and the Wildcats are confident going to the air when needed.

The Wildcats have a little history on their side too.

In each of the past four meetings between the two schools, the games have been tightly contested with the average margin of victory in the last four games being three points, including two 14-13 games, in which was Cadillac the victor in both games.

However, the home team has been victorious in the past four meetings, so if the trend continues, luck may be on the side of the Wildcats.

In both of those years, Alpena’s second win in the conference to move them to 2-0, came against the Vikings.

The Wildcats are hoping history repeats itself tonight.

“It should be a low scoring, close game if the trend continues that’s for sure. Obviously we want to go out and score points. We feel as if we’ve built an offense right now that we can get guys into space and we can still power run,” Mitchell said. “I think whatever team controls the ball longer and capitalizes on the other teams missed opportunities is going to win the game. We have to make sure we don’t put the ball on the ground, no high snaps and our special teams needs to continue stepping up and if we’re able to put all of that together, I don’t see any reason we can’t walk out of our stadium Friday night 2-0 and atop the conference.”