Wildcats get tough test vs TC West at home 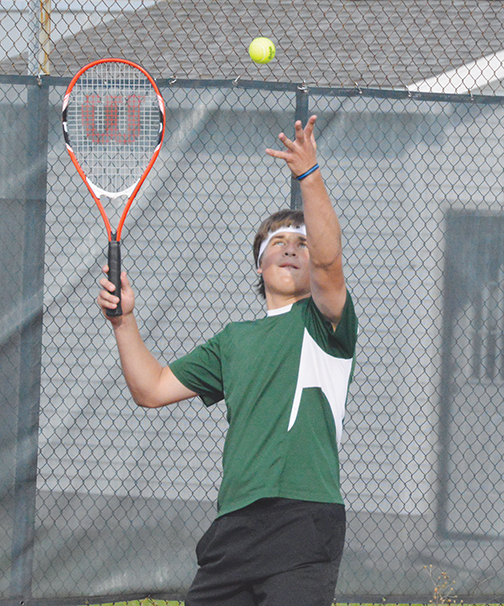 Dean Kowalewsky wasn’t going down without a fight.

The Alpena senior dropped his No. 2 singles match against Traverse City West’s Alex Gerling on Thursday (2-6, 3-6), but Kowalewsky made sure Gerling earned the victory. During a match that latest nearly an hour, Kowalewsky pushed Gerling and hit several impressive shots to keep the West senior on his guard.

Kowalewsky’s match was the closest the Wildcats came to winning a flight during a tough, but competitive 8-0 Big North Conference loss at Alpena High School.

Kowalewsky’s intensity showed when he was able to hit balls past Gerling and Alpena coach Charlie Giordano praised his efforts. Kowalewsky matched Gerling volley for volley for large stretches, forcing Gerling to beat him with good shots and several times during the match, Kowalewsky sacrificed his body by diving to keep a ball in play.

“It was a great match. He’s been playing a lot and working on his game. The kid he played is a machine; Alex Gerling is tall, he’s strong and probably put on three inches and 15 pounds of muscle over the summer,” Giordano said. “Dean hung with him. You look at the scores and you might think he got killed, but he went to deuce a bunch of times and had a lot of really good points.”

Giordano was pleased to see Kowalewsky working hard and said one of his best attributes, especially in a match like the one Thursday, is his mental toughness.

“He stuck to his plan and kept the ball in play as much as he could. Every game you get when you play a guy that good you have to earn. For him to earn five games in two sets is very good,” Giordano said. “If you can enjoy the points you win and commiserate on the points you lose and move on from there, that’s good. The problem is when you think about that point you’ve lost six points later; then you’ve lost the next six. He’s learned to kind of let it go.”

At one doubles, Kevin Cook and Josh Pokorzynski lost 0-6, 0-6 to Eduardo Gonzalez and Will Crick; Nick Schultz and Tanner Orban lost 1-6, 0-6 to Joe Klein and Jack Beltnick at two doubles; at three doubles Logan Denbleyker and River Servia lost 0-6, 0-6 to Murphy Kehoe and David Fischer and Nick Lusardi and Connor Caplis lost at four doubles 0-6, 0-6 to Jackson Tisdale and Wyatt Mcgarry-Costello.

Led by a talented group of seniors, the Titans are in the midst of one of their best seasons in recent memory. Expectations were high going into the season and the Titans have lived up to them so far, beating Traverse City Central twice already this season along with other wins.

“They are the team to beat in our conference, between them in Petoskey. They’re technically sound, well coached and they have no weaknesses in their game.” Giordano said. “If you pick up a game against these kids or you play a lot of games to deuce, it’s good. The score is immaterial (and) our kids are getting better.”