Shorthanded Tigers get trounced at home by Ogemaw Heights 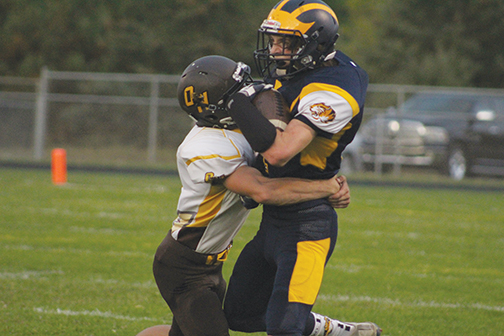 News Photo by Jonny Zawacki Alcona running back Jacob Sytek gets wrapped up and tackled by Ogemaw Heights defender Scott Smith during the first quarter of a football game on Friday at Alcona High School.

LINCOLN — Being shorthanded proved costly for the Alcona football team on Friday as the Tigers played host to Ogemaw Heights. The banged up Tigers were on the receiving end of a 48-0 shellacking at the hands of the Falcons at Alcona High School.

The only promise Alcona showed was on its opening possession of the game where it lined up and did its best to run right at the Falcons.

The Tigers opened the game with an 11-play drive that went for 40 yards, but Alcona had its best drive of the night stall out and it turned the ball over on downs.

The rest of the night belonged to Ogemaw (3-1).

The Falcons scored on all but one of their eight offensive possessions and were efficient putting points on the board.

Ogemaw opened the scoring as quarterback Calvin Beck took the third play from scrimmage 33 yards to the end zone to put the Falcons up 6-0 and from there the train just kept on rolling.

Alcona was turned over on downs four times, was forced to punt on three separate occasions and coughed up the football once. Offensively, the Tigers could only muster 116 total yards of offense as running back Michael Baser paced the home team with 47 yards on 16 carries and Jacob Sytek added 45 yards on 14 touches.

Alcona’s injury situation got even worse as it lost starting quarterback Gavin Walker to an injury early in the second half that kept him out the remainder of the game.

The Falcons had no issue moving the football as they amassed 388 yards of total offense, 159 of which came from Beck who was responsible for the first three Ogemaw touchdowns. He threw a 41-yard touchdown to Jere Getzinger in the first quarter to put the Falcons up 14-0 and then scampered in from 11 yards out to put his team up 22-0 late in the second quarter.

Beck finished with 89 yards rushing and two touchdowns on seven attempts and went 3-of-5 passing for 70 yards a score.

The Falcons capped off a dominant opening half by scoring with 53 seconds remaining in the second quarter as Caleb Gleeson found pay dirt from 20 yards out. Gleeson carried the ball five times and had 50 yards rushing and the one score.

The Falcons were led by Tyler Walters who finished the contest with 112 yards rushing on 10 carries and found the end zone once on Ogemaw’s first possession of the second half.

Zea Kartes made the most of his five rushing attempts as he added 52 yards on the ground and a pair touchdowns as Kartes scored from 13 yards out and completed Ogemaw’s scoring for the night with a 23 yard sprint to the corner of the end zone early in the fourth quarter.

Alcona falls to 1-3 overall on the season and will resume North Star League play in Week 5 when it hosts Whittemore-Prescott.