It’s not their night

Wildcats can’t keep up with Titans in shutout loss 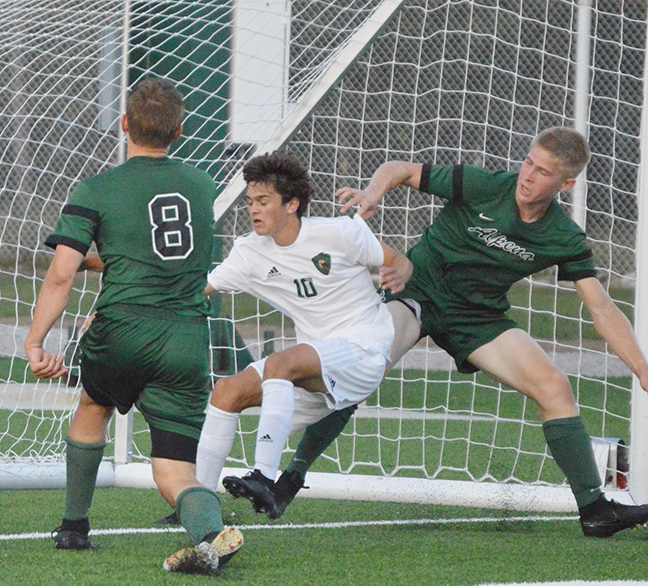 News Photo by James Andersen Traverse City West midfielder Colin Blackport (10) crashes the net for a scoring opportunity while Alpena players Kolton Goebel and Jack Hamp (8) defend during the first half of a boys soccer game on Tuesday at Park Family Field at Wildcat Stadium.

Traverse City West showed the Alpena High boys soccer team why it’s the team to beat in the Big North Conference on Tuesday.

Tony Gallegos and Josh Hirschenberger each scored twice and the Titans rolled past Alpena 7-0 at Park Family Field at Wildcat Stadium.

Trying to keep a hold on second place in the conference, the Wildcats (8-2-1, 2-2 BNC) came up empty after being outplayed in all facets of the game. The Wildcats trailed 4-0 at halftime and couldn’t generate offense consistently in the second half to put up a fight.

“The first five minutes we had a chance to go up 1-0 and (we didn’t),” Alpena coach Tim Storch said. “What concerns me is how we played in the first half. You just can’t come out and lay an egg like that in the first 40 minutes.”

Already up by four at halftime, the Titans put on an offensive clinic over the final 40 minutes. With 36:35 left to play, Gallegos corralled a pass, found enough space to maneuver and sent the ball to the top right corner past Alpena backup keeper Matt Diamond.

Diamond took over for Wenton Harrison with 12:58 left in the first half.

Jung made it 6-0 with 27:18 to go. A streaking Colin Blackport passed up his own scoring chance and sent a cross to Jung, who found the top right corner of the goal.

Durbin completed the night’s scoring with 12:14 left, drilling an absolute laser past Diamond on a free kick.

“The three goals they had in the second half were quality goals. I can’t fault any of our players on that,” Storch said. “Those were three quality goals and good players. Good players can do that. At that point you just clap for them, say ‘Hey, that’s a great shot’ pull the ball out of the net and kick it off.”

The Wildcats had chances late in the second half, but came up empty. Alpena was awarded four corner kicks in the final six minutes of the contest, but couldn’t register a shot on goal from any of them.

Alpena missed a chance on a header with just under 20 minutes left, but for most of the game the Wildcats were kept on the defensive by a West squad that seemed to move the ball exactly where it wanted, when it wanted.

After Ivo Arvidsson-Ullberg was stopped on a free kick less than five minutes into the game, the Titans took over.

Holfels put West on the board after a corner kick conversion with 32:41 left in the half and the Titans’ aggressiveness and pinpoint passing kept Alpena’s defense busy.

Hirschenberger made it 2-0 with 15:47 left when Alpena’s defense had trouble corralling a bouncing ball and he connected again on a header with 14:40 left.

West stayed hot as Gallegos scored with 12:58 left, outracing an Alpena defender to beat Harrison with a shot between the legs.

With three goals in less than five minutes, Storch said the first half is one he and the Wildcats wanted to have back.

“We gave up four terrible, terrible goals in the first half. Mistakes in back, mistakes in goal, mistakes on restarts, you name it,” Storch said. “Those four goals, they were like a hand book of how not to defend.”

Alpena will have a quick turnaround with Traverse City Central coming to town on Thursday for a 6 p.m. game. Storch plans to remind his team Tuesday’s contest is just one game and Thursday is a chance for a fresh start.

“No one’s going to feel sorry for us. This is the best opponent we’ve played by far, but did well against Central last year. They’re going to come out hard,” Storch said. “We’re going to be ready, turn the page and start over and as Sparky Anderson and Ron Gardenhire and Jim Leyland all say, ‘Each game counts as one.'”