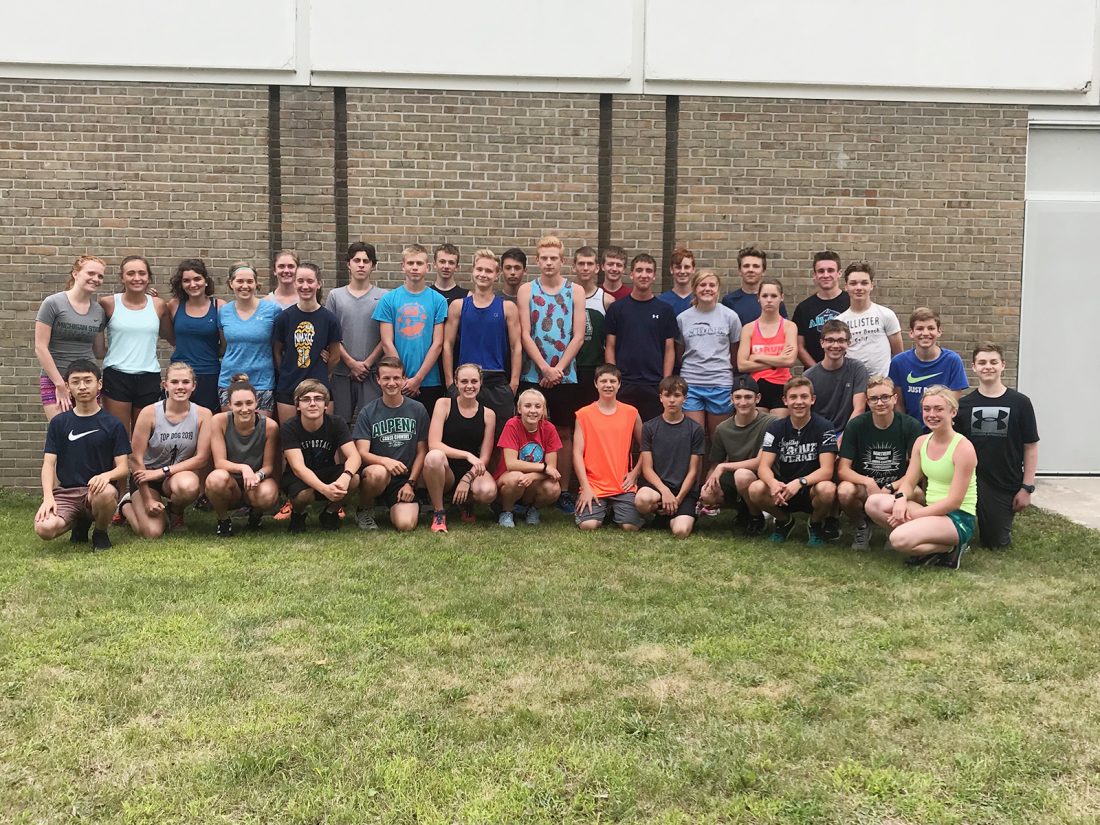 News Photo by Jonny Zawacki The 2019 Alpena High cross country team will be hoping to carry on the winning tradition the program has set in recent years. Continuing that success will be no easy task as the Wildcats return just one starter from last year on the boys side, but the girls return all but one starter and have the potential to carry on the success this season.

It’s never easy saying goodbye to a gifted group of senior athletes, especially when a handful of those athletes went on to the collegiate level to run and another transferred to a rival school. Aidan Smith and Josh Smith are now Michigan State Spartans, Maddy Boyd is at Central Michigan University and Drew Seabase will be competing against the Wildcats and running for rival Traverse City Central this fall.

These were huge losses for the Alpena cross country program and the Wildcats return just one starter off of the varsity seven from last year on the boys side.

“With boys and maturity, their physical maturity just keeps going and going so I’m sure that a lot of our kids will step up and fill in the shoes, not to the extent of the twins from last year, but we have some kids that are looking very solid, very early in the season and they’re very young,” Alpena coach Joy Bullis said. “I have four seniors, but only one is a returning runner, we have a good group of juniors, but none have been varsity and we have some freshman that are going to take them all down. It’s going to be solid, but young and definitely a rebuilding phase for the boys.”

Jacob Kochanski will likely be among the top of the group to lead the boys along with freshman Cameron Young and Hunter Hitzelberger and senior Lucas Manning. Those four runners may be competing for the top positions.

For the girls, it’s much different as the Wildcats return all but one of their varsity seven from a year ago.

Madi Szymanski will be relied on to take that next step forward after pushing Maddy Boys the past few years and Szymanski will lead the group of Wildcat girls that has potential to be strong this season.

“I have a big group of senior girls this year that will most likely be my varsity seven. We lost a lot of leadership off of last years team and we don’t quite have the same leadership going on this year and we have a long way to go, especially on the boys side. I think that the girls are determined and they will see success, but they just have to learn how to work together,” Bullis said. “I think our biggest strength this year will be that we will likely be running in packs because they are all so similar in pace and race times. We could still be very effective and that’s going to be our strategy this year and try to run a little tighter this year.”

The goal for Alpena is to always be among the top three in the always competitive Big North Conference.

This year, the Wildcats won’t have quite the learning curve on the conference as the conference meets have been cut from three to just one. Along with goals for the conference, Bullis is hoping that regionals go well and the athletes end on the best note possible and she believes there is a possibility that individuals can advance to state competition at the end of the season. One of the positives will be that both Traverse City Central and West will no longer be in the same region as Alpena which will make for better opportunities for the Wildcats.

“We’re just going to keep working and I can’t wait to see what we do and we can then begin fine tuning some things and working on what we need to in order to get better and prepared for the end of the season,” Bullis said.