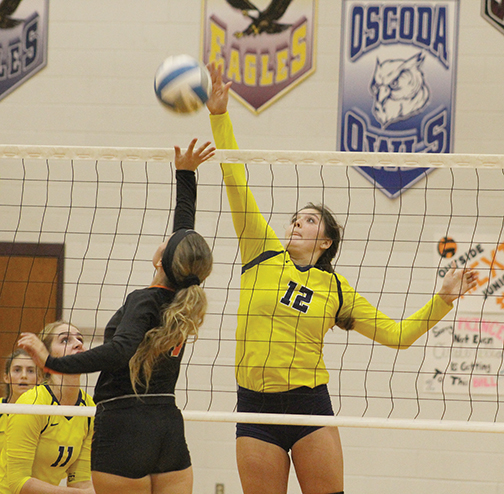 News Photo by Jonny Zawacki Alcona’s Rachel Layton (12) tips a ball over the net and past Hillman defender Emma Libby (7) during a North Star League volleyball match on Tuesday at Hillman High School.

HILLMAN — Tuesday’s North Star League volleyball matchup between Hillman and Alcona went about as you’d expect between two teams that are complete opposites.

Alcona (2-1 NSL) is veteran laden team that is likely going to be among the top teams in the NSL and Hillman (0-3 NSL) is a young and inexperienced group that is in for a rebuilding and learning year.

Add that up and the results equaled a lopsided victory for Alcona as the visiting team won by scores of 25-8, 25-15 and 25-14 on Tuesday at Hillman High School.

“The girls came out, worked together, communication was on point, they anticipated well and made big plays when we needed to tonight,” Alcona coach Kristi Miller said. “It’s very important to win a conference match. Our conference is extremely competitive so every time you come out on someone else’s court and you’re able to play as well as we did tonight, it’s a key victory.”

Alcona made the first set look easy and cruised to an early led in the match.

Hillman kept the set close and trailed 17-15 late, but Alcona scored eight unanswered to end the second set and take a commanding lead in the match.

“I liked that despite losing the first set that we came out and played good early in the second set, but we lose momentum and that was my big talk to them in the locker room after the game, I told the girls we can’t just let momentum go, you have to keep things going in the right direction,” Hillman coach Kim Weiland said. “Attitudes are well and when we fell down we picked each other up and kept a positive attitude. We are only three games in and we have a lot of learning to do, but we’re getting there.”

Alcona carried its momentum that it gained by finishing the second set strong and put away Hillman in the third set without much of a problem to complete the sweep.

Alcona was led by Lily Bilbey who recorded 13 kills and Isabella Bates who finished with eight aces.

Hillman was paced by Makenna Grulke who had 13 digs, three kills, two aces and a pair of blocks. Ellie Crawford added 11 digs, one block and one kill. Emma Libby finished with five digs, five assists, two aces and two kills and Melanie Morrison chipped in with 14 digs and one ace.