Wildcats come up short in home-opening loss to Sault 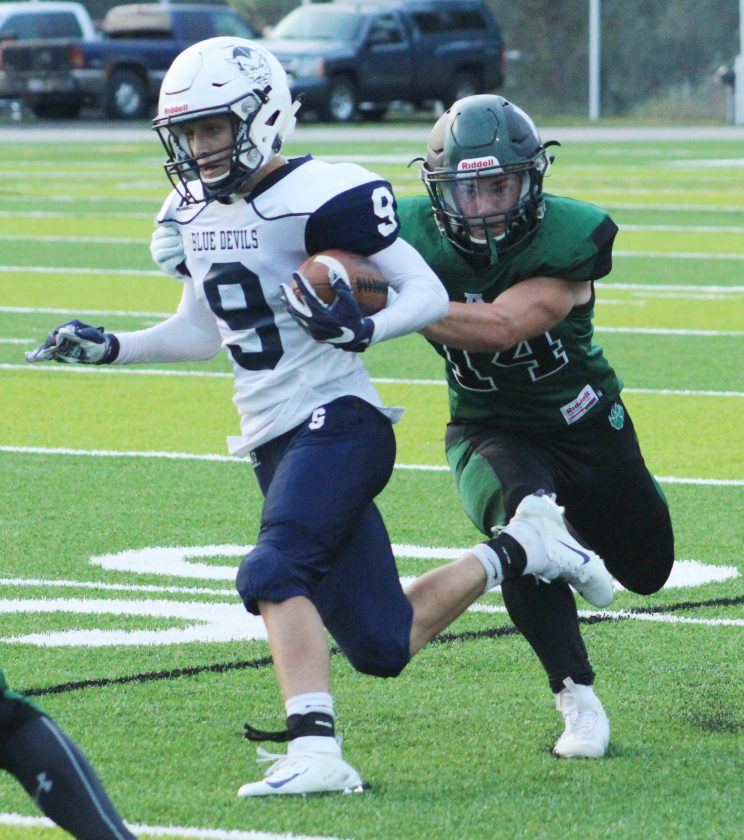 The Alpena High football team could have thought up of hundreds of different ways they would have liked to have played in its home opener on Friday night and none of those thoughts would have came close to the end result in their first ever game played on Park Family Field at Wildcat Stadium as Alpena failed to execute at key moments and made costly mistakes in a 20-14 loss to Sault Ste. Marie.

The Wildcats (0-2) prepared for Sault sophomore quarterback Jakob Davie all week and it still wasn’t enough as Davie picked apart the Alpena defense going 8-of-12 passing for 132 yards and threw three touchdowns.

Davie’s biggest play of the night was not even a touchdown, but with Alpena trailing 20-14 with 49 seconds left, Sault faced a fourth down and 16 yards to go from just beyond midfield and instead of punting, Sault head coach Scott Menard put his faith in his signal caller and Davie delivered an 18 yard strike to James Huskey on the same flood route to the flats that hurt the Wildcats all night and it allowed Sault (2-0) to pick up the first down and allow the Blue Devils to run the clock out.

Alpena struggled to move the ball offensively in the first half and the Wildcats’ first costly mistake came after the Blue Devils’ opening drive where they went three and out and punted, but a high punt deflected off an Alpena body and Sault recovered the ball.

The Wildcats defense prevented Sault to turn it into points and was strong at times in the first half until Davie and the Blue Devils offense found its rhythm in the passing game.

Sault opened the scoring with 34 seconds left in the first half when Davie connected with receiver John Robinson for a 13 yard touchdown to give the Blue Devils a 6-0 lead.

“In the first half our defense played okay, but we ran six plays after out first series so at the end of the day we didn’t get the ball back in the first half,” Mitchell said. “Second half we made some adjustments, I started calling better plays, we started calling better plays and I give Sault credit, they planned all week and they definitely knew what we wanted to run and they were ready.”

Sault extended its lead with 7:43 left in the third quarter when Davie found a wide open Huskey for a 44 yard touchdown and Davie converted the two point try with his legs to put the Blue Devils on top 14-0.

The Wildcats got on the board late in the third quarter when they put together their best drive of the night as Alpena drove 63 yard on 12 plays and it resulted in an Eli Winter touchdown to cut the lead to 14-7. Winter finished with 40 yards on the ground and two scores on 12 carries and Jordan Schultz added 40 yards on 10 carries.

The Blue Devils regained its two touchdown advantage with 7:20 left in the contest when Davie connected with Robinson on a key fourth down and seven yards to go for a 14 yard touchdown and give Sault a 20-7 lead.

Along with Davie’s big night, Kris Pearce toted the rock 23 times for 98 yards. Huskey had 57 yards on the ground and 89 yards receiving in the win.

The Wildcats continued to do everything they could to claw their way back into the game and seven plays late, Winter found the end zone for the second time on a fourth and one as he kept his legs moving and escaped from a crowd of players and powered his way in from 15 yards out to cut the lead to 20-14, but Alpena was unable to get the ball back after Davie made the play of the game on the fourth and 16 to put the game on ice.

“It’s on us to as coaches, when we had a timeout we should have said that if they come out in a formation that is different that a punt, be ready for a pass to the flat and that’s on us,” Mitchell said. “We have to go back and absolutely go back through every little single thing that we know. We want to put in knew things every week, but until these little things go right, we can’t put anything new in. We have a lot that we haven’t shown yet, but at the end of the day, if we don’t do these little things, it’s going to be a very long season for us.”

Alpena will be back in action next Saturday when they host Gaylord in their Big North Conference opener.

In the heat of battle tensions can run high, especially for the losing team. Swami recently saw a college ...