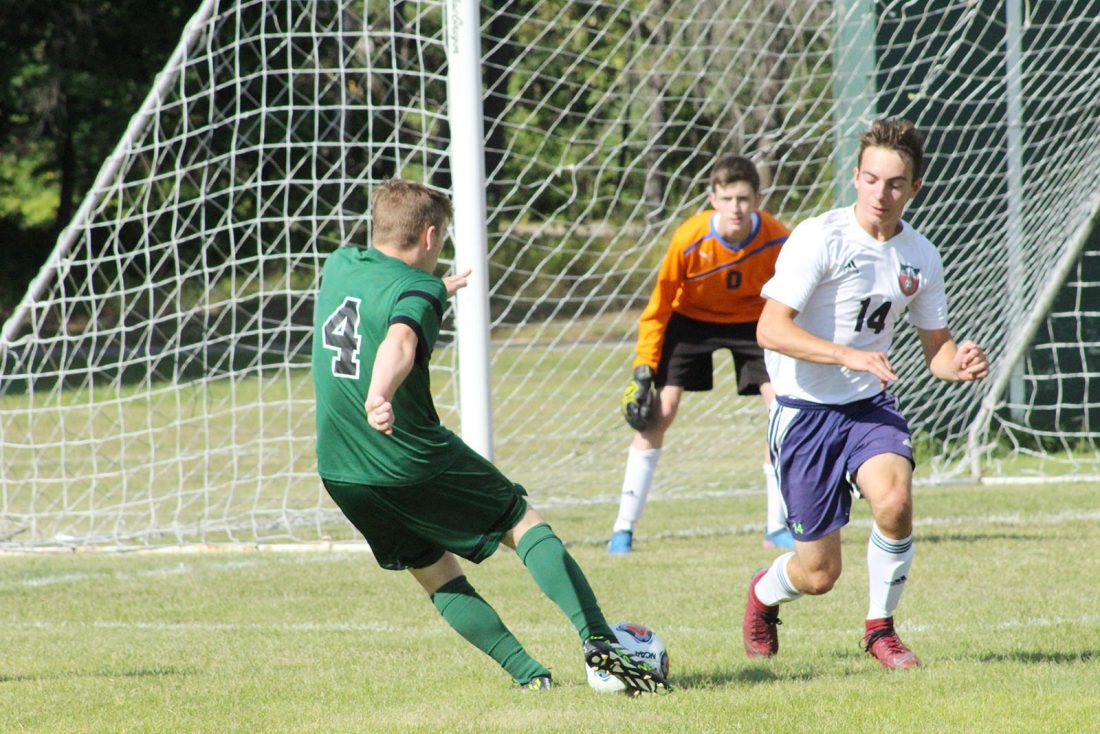 Alpena’s Caleb Eaton (4) sends a shot on goal during the first game of Alpena’s annual Sunrise Side Soccer Cup Challenge against Boyne City on Saturday at Alpena High School.

Saturday’s Sunrise Side Soccer Challenge Cup was mixed with emotion as the Alpena boys soccer team began its 2019 campaign with an 8-0 victory over Adrian and a 2-2 tie with Boyne City.

Gaylord won the tournament after defeating Adrian 7-1 and Boyne City 5-0.

The Wildcats played strong in spurts during the game one tie against Boyne and took a 1-0 lead 24 minutes into the game on a goal from Grant Botha who was set up by a perfect assist from Kyle Barbeau.

The Wildcats had an opportunity to build on the lead and take the one goal advantage into the break, but Alpena missed high on a penalty kick opportunity and shortly after, the Ramblers marched down the field and tied the game up at one goal apiece, scoring a goal with five minutes left in the half to send both teams into the break even at one.

The two teams battled throughout the second half and it looked as if Alpena had scored the equalizer as Barbeau found the back of the net after a scramble out in front of the Boyne keeper and gave the Wildcats a 2-1 lead late.

The Ramblers began to pressure and try to tie the game and they did exactly that with 10 seconds to play as the teams played to a 2-2, frustrating the Wildcats and head coach Tim Storch.

“The first game was extremely disappointing. To out-possess them (Boyne) the way we did and out-chance them the way we did, not only did we get just two goals, but it looked like we were going to be able to sneak out a victory after the late goal, but then we surrendered the goal in the final seconds was very disheartening,” Storch said. “That’s one that we can’t get back. It’s a tie and it’s one we’ll look back on and realize we’re better and we shouldn’t have gave that one away.”

Game two was a much different story as the Wildcats rolled past Adrian, winning by a score of 8-0.

Alpena was dominant from the opening whistle and kept in the attack the entire contest.

“We did make some changes in the second game and moved some people around to try to create more space and I think the second game we did a much better job with our spacing,” Storch said. “It’s nice winning 8-0, but what’s positive is that Adrian was a team that beat us last year 3-1, so it speaks volumes on where our program is at and where we are headed.”

Alpena held a 6-0 lead at the half as they got goals from Barbeau, Mike Clark and Ivo Arvidsson-Ullberg who recorded a hat trick in the opening half.

The Wildcats finished the game with goals from Arvidsson-Ullberg and Matt Diamond.

“Overall it was a nice day for us to get a look at some teams. The teams that were here are quality teams and another team in our conference in Gaylord who we will see throughout the season,” Storch said. “It’s important for us to see and play these quality teams early and understand what we’ll need to continue focusing on as we get deeper into our season.”