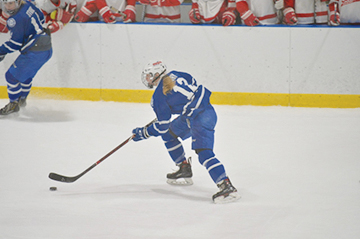 Courtesy Photo Alpena native Emma Gentry has been selected for the 2019 USA Hockey Women’s National Festival in Lake Placid, New York, which begins on Aug. 5. Gentry, who plays for Meijer’s U19 girls AAA team, recorded 105 points in 65 games last season and will play next season with Honeybaked’s U19 team in Metro Detroit.

Hard work is paying off in spades for Emma Gentry this summer.

Gentry, an Alpena native, was one of five Michigan players selected for the 2019 USA Hockey Women’s National Festival in Lake Placid, New York. The week-long event runs from Aug. 5-14 and will feature some of the top U18 and U22 players in the nation. The festival will also help representatives from USA Hockey select rosters for a tournament series with Canada.

“Yeah this is definitely one of the most exciting things I’ve had in my career,” Gentry said. “I’ve put a ton of work into hockey and knowing that it pays off, I feel accomplished.”

Gentry’s trip to New York comes only a few weeks after she took part in the USA Hockey Girls Under-18 Select Player Development camp in Minnesota last month.

Gentry, who’s committed to St. Cloud State to play college hockey, got the chance to play on her future home ice during a nearly week-long camp in St. Cloud, Minnesota that tested players with on and off-ice drills, focused on strength and conditioning and also advised players on nutrition and sports psychology.

“They have a nice facility, nice rink and I love the campus. When I went and visited St. Cloud, it’s a perfect mix for me between big city (and small town),” Gentry said. “I’ve wanted to do this my whole life. I’ve been playing hockey for 13 years, so it definitely is an honor to be able to fly across the country and do this.”

Over the last year, Gentry has cut an impressive path on the ice. During the 2018-19 season, she played for Meijer’s U19 girls AAA team, which advanced to the state championship.

Under the tutelage of former Michigan State standout and Detroit Red Wing Kevin Miller, Gentry finished the campaign with 105 points in 65 games–71 goals and 34 assists.

Gentry has played hockey for 13 years and spent a decade playing with boys teams in Alpena before moving on to the Kalkaska-based K-Stars AAA team before moving to Lansing.

This season she’ll play with Honeybaked 19U based in Farmington Hills.

It’s been a busy couple of years for Gentry on the ice, but the last few years have also been a time for a lot of personal growth.

In addition to balancing classwork with hockey practice and games, Gentry has learned the importance of nutrition, has also focused on strengthening her mental approach to the game and worked on bettering aspects of her game her coaches have told her to work on.

Those adjustments as well as adjusting to a higher level of competition has turned Gentry into a more versatile player, who has her sights set on the U18 world championships next year if things go well in New York.