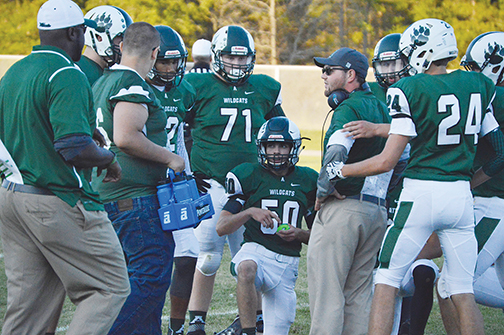 News File Photo Alpena High coordinator Eric Mitchell talks to his defense during a game at Wildcat Stadium. Mitchell, who has been with Alpena’s program since 2014, was named head coach on Wednesday.

Eric Mitchell has seen a lot during his time with the Alpena High School football program and has watched the Wildcats go through ups, downs and a lot of changes.

Now after five years as an assistant, Mitchell is getting a promotion.

Mitchell was announced as Alpena’s new coach on Wednesday and will be the new head man on the sidelines when Alpena opens the season in August.

He replaces Aaron Sims, who left after three seasons to take a coaching position in Belding.

Mitchell previously interviewed for the head coaching spot in 2016 before it went to Sims. This time around, Mitchell was chosen from a sizable pool, which included several external candidates.

Mitchell’s tenure began in 2014 when Brian Tippman led the program. Mitchell then served on Brad Moughon’s staff in 2015 and then on Sims’ staff for the last three seasons.

As Alpena’s new coach, Mitchell will be charged with bringing stability to a position that has seen a lot of turnover in recent years. When Alpena takes the field this fall, Mitchell will be the sixth coach to lead the Wildcats since 2010.

“The committee felt strongly that Mitchell will bring continuity and stability to a program that has had five previous head coaches in this decade. Eric, who is married and teaches at Alpena HS, has strong ties to the community and will be someone who views this opportunity as a destination, rather than a temporary stop,” Alpena Athletic Director Tim Storch said in a press release. “Eric is familiar with the players and will provide a smooth transition into the upcoming season.”

Under Mitchell, Alpena’s defense has shown steady improvement, especially last season. The Wildcats allowed 22 points a game–a vast improvement over the 34.5 per game allowed in 2017–and fared well against some of their tougher opponents. One of the most noticeable efforts was the season finale, where Alpena’s defense held eventual Division 4 state-runner up Chelsea to 14 points in a 28-14 victory at Wildcat Stadium.

On the offensive side of the ball, Mitchell plans to build on the Wing-T offense introduced by Sims in 2016 and to help the Wildcats do a better job of finishing in close games. Mitchell estimated the Wildcats were only a handful of plays away from finishing better than their 3-6 record last season. In three of the six defeats, Alpena lost by five points or less.

“Aaron did a great job building that up and now we want to build on that,” Mitchell said. “In about 10 of our 13 losses in the last two years we’ve been right there. We know we can play with those teams; now it’s about getting over the hump.”