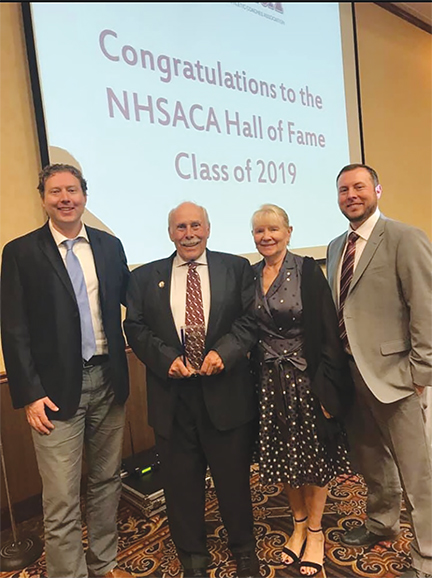 Courtesy Photo Alpena alum John Cunningham, second from left, was inducted into the National High School Athletic Coaches Association Hall of Fame last month in Bismarck, North Dakota. Cunningham, a 1963 graduate of Alpena High School, has been coaching for more than 50 years and has earned numerous coaching honors in his career, including induction into several Halls of Fame. He was joined at the ceremony by his wife Sally and his sons Adam and Ryan.

During his long coaching career, John Cunningham has earned a slew of awards and been inducted into several different Halls of Fame.

But last month, Cunningham received an honor that even he admits ranks among the best in his career.

Cunningham, a 1963 graduate of Alpena High School, was elected to the National High School Athletic Coaches Association (NHSACA) Hall of Fame. Cunningham found out he was elected last fall and was officially inducted last month during the organization’s national convention in Bismarck, North Dakota.

“This one is more special. It’s a national honor and not a lot of people can put that on a resume,” Cunningham said. There’s an old quote that I like that says, ‘A coach will impact more young people in a year than the average person does in a lifetime.'”

The honor is just the latest in a 51-year career filled with them. As the longtime gymnastics coach at Canton High School, Cunningham turned the Chiefs into a state powerhouse. Cunningham led his program to a team state championship (2014) and coached four numerous All-Americans and several individual state champions.

In 2016, he named NHSACA’s Coach of the Year in the special sports category and in February 2018, he was part of the inaugural class of the Canton Athletic Hall of Fame.

Cunningham has certainly made his mark in his career, but he said it’s his love of coaching that keeps him going more than any awards. He competed for the Wildcats in the 1960s and went on to join the University of Michigan’s gymnastics program before turning his attention to coaching. He started as a student teacher in Plymouth before founding the Plymouth Gymnastic Club in 1968 and starting as Canton High’s coach in 1979.

“I’ve enjoyed coaching every single year. I’ve had good teams and bad teams, good athletes and bad athletes, but I believe in having fun so records and winners and losers doesn’t do much for me,” Cunningham said. “I tell my girls every year: if you’re not having fun, you’re in the wrong sport.”

This past season in particular, was one that Cunningham called one of his most rewarding.

“Last year, I had the best team. The girls were embarrassed (by our record), but I said, ‘Girls, we had so much fun,'” Cunningham said. “Ask any of them and they would say they had fun too because we emphasized growing and learning.”